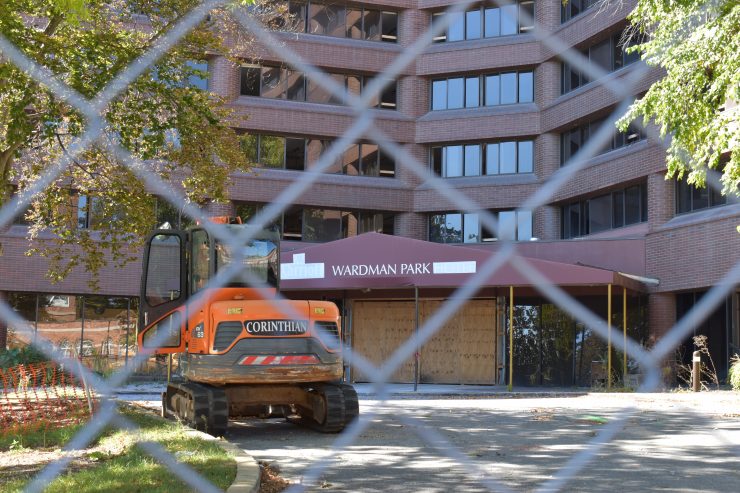 The redevelopment of the Wardman Park Hotel has become a point of controversy in the community. As Woodley Park readies for 900 new apartments across two buildings, some advocates are fighting to make them more affordable.

Affordable housing advocates are calling on the city to pursue more affordable apartments at the Wardman Park Hotel redevelopment before construction begins.

Groups including Ward 3 Housing Justice and the Wardman Hotel Strategy Team are petitioning officials across District departments to further assess the project’s potential to meet community housing needs. The advocates have already done this themselves, developing independent housing concepts and architectural reviews of the former hotel.

“We’ve talked about doing a presentation to the [D.C.] Council staff, to all the council members, to try and let them understand why we’re thinking this way,” said Robin Diener, a member of WHST.

Located next to the Woodley Park Metro station, the Wardman Park Hotel closed in January 2021 after its owners filed for bankruptcy. The property was sold at auction to real estate firm Carmel Partners for $152 million the following winter.

Carmel Partners plans to demolish the vacant hotel and build two apartment buildings with a total of 900 units. In accordance with district inclusionary zoning requirements, the developer will include 72 affordable housing units at the Wardman site — 8% of the total occupancy.

The project has “incredible potential” to provide more affordable housing in northwest D.C., said Margaret Dwyer, convenor of W3HJ. Dwyer said affordable units are accessible to people earning up to 60% of the District’s median family income. That equals a family of four making $85,400 or less.

Ward 3 Housing Justice and the Wardman Hotel Strategy Team believe more affordable units can be added to the project through further government oversight.

This includes Large Tract Review, a process administered by the city’s Office of Planning to assess a project’s potential neighborhood, quality of life and environmental impacts. Dwyer said the review would help community voices be heard and promote additional affordable units at the Wardman.

“It could only be good for the community,” Dwyer said.

While a Large Tract Review is required on a development site three acres or larger, it has not been conducted at the Wardman due to a dispute over the project’s eligibility.

“It seems to me that it is illegal not to have performed it,” Diener said.

A spokesperson for the Office of Planning said the development project covers just under 2.8 acres. Conversely, Carmel Partners’ construction application to the Historic Preservation Review Board in January describes the work site as 9.5 acres. An independent review from architect Jim Schulman, provided to The Wash by Diener, estimated the project would impact at least seven acres.

“The building that is being torn down is 4.75 acres alone,” Diener said.

The Office of Planning said it would not conduct an LTR at the Wardman unless the work site grows larger than three acres or commercial use projects like offices or retail spaces are added.

While an LTR cannot require an increase in affordable housing units, advocates believe the process would bring more pressure from city officials.

The Office of Planning said while it encouraged the developers to provide more affordable housing units, “Carmel Partners has consistently stated their intention” to provide the minimum 8%.

“They never were really interested in looking at what the city needs in terms of affordable housing,” said Meg Maguire, chair of Northwest Opportunity Partners Community Development Corporation.

Carmel Partners did not respond to multiple requests for comment.

NWOPCDC previously developed an architectural concept for the Wardman, which projected the site could have 500 affordable units. This would have met a fourth of the city’s goals for affordable housing in the area.

When Mayor Muriel Bowser announced citywide affordable housing goals in 2019, the Rock Creek West area had the highest at 1,990 units built by 2025. District officials believe they can add even more, up to 2,400 units, according to the 2021 Rock Creek West Roadmap report.

Some members of W3HJ and WHST disagree.

Halfway to 2025, 69 affordable units — or 3.5% of the goal — have been created in Rock Creek West, according to a city dashboard last updated in September.

“We’re going to need creative thinking and action [from the city] to seize [affordable housing] opportunities when we have them,” Maguire said.

The Rock Creek West roadmap estimates the largest share of affordable units will come from converting existing buildings. The Wardman is identified as an “opportunity site.”

“Why have a beautiful goal of basically 2,000 new units of affordable housing and then not do everything possible to reach that goal?” Dwyer said.