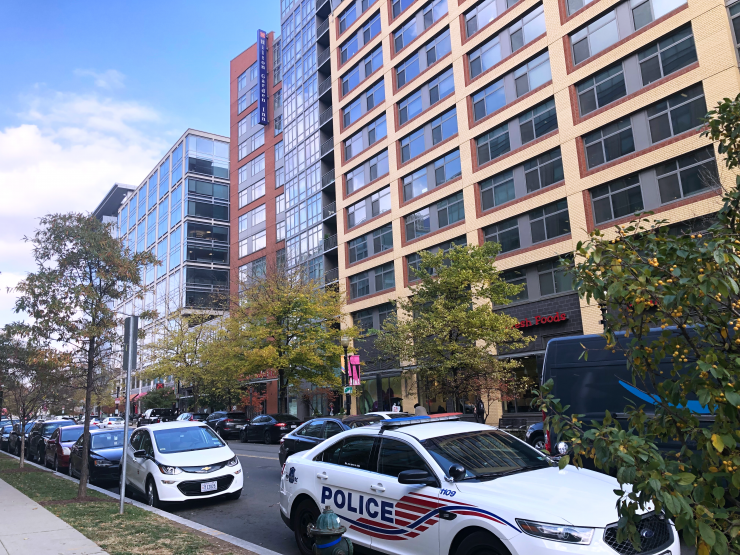 NoMa residents expressed concern over a recent increase in violent crime. Laura Hernandez, NoMa resident, said even though she feels relatively safe walking around her neighborhood, she is still always looking over her shoulder.

“You kinda always have to have your guard up,” Hernandez said.

“I feel relatively safe, but I still am cautious in the way I think most women are cautious in a city when it’s darker or less populated,” Fernandez said.

Because this number is so dramatic, the Wash contacted MPD to verify the data posted on their website is correct. MPD verified that it is accurate.

Neighboring NoMa resident, Caty Jay, who lives in Trinidad, said she normally has confidence walking home alone at night because of the self-defense classes she takes, but after becoming a victim of a recent attack with multiple assailants, she said she feels more fearful.

Dustin Sternbeck, director of communications for MPD, stated in an email that the department’s data query shows an increase in dangerous weapon assault crimes in NoMa, and they are committed to addressing residents’ concerns.

“We recognize the negative impact that these incidents have on the community and are committed to violence prevention,” Sternbeck stated.

In the last week, #DCPolice officers removed 56 illegal firearms from the streets of #DC and out of the hands of criminals. #FirearmsFlashback pic.twitter.com/Lvj6p6fBJe

In an effort to reduce violent crime, Sternbeck stated they have implemented an intelligence-led policing strategy.

Fernandez said she is confident that MPD is confiscating more illegal firearms off the streets of D.C., but at the same time it is also very concerning to hear how many there were in the first place.

Fernandez said a few weeks ago she made dinner reservations at Copy Cat, a local H Street restaurant, and right before she left her home she got a call from them asking if she wanted to keep her reservations because there had been a shooting just outside the restaurant.

“It was one of those things where you’re like, ‘Wow, that’s like super scary to think about,’” Fernandez said. “To think I might have been walking down there to grab food.”

Fernandez said gun violence has become a rising concern for her, as she hears more and more about it from both news outlets and friends.

According to recent data released from MPD, gun violence is on the rise. Last week D.C. reached its 200th homicide by gun violence — a number not seen in 2003.

Sternbeck stated that reducing violent crime and making D.C. a safe community is of the utmost importance to MPD.

“Our agency goal is for Washington, D.C. to be the safest city in the world, and we work tirelessly to make our community safe,” Sternbeck stated.

In addition to the intelligence-led policing strategy, Sternbeck wrote that MPD has implemented other initiatives to reduce violent crime.

Sternbeck stated that MPD recently kicked off their summer and fall crime prevention initiative, which serves as a collaborative effort to “reduce violent crime through strategic prevention and focused enforcement.”

Back in July, MPD created a community-focused patrol unit deployed to areas of the city based on data analysis to address critical incidents and key community concerns, Sternbeck stated.

Finally, Sternbeck stated that MPD kicked off a district-wide engagement initiative a few weeks ago, with a mission to have MPD officers interact with as many community members as possible.

Sternbeck told the Wash that all of these initiatives are only a handful of methods MPD plans to use to address violent crime in the community, and they are committed to continuing their efforts.

“While these are just a few examples of ways we are addressing crime and engaging community, we will continue to be laser-focused on curbing violence, particularly gun violence,” Sternbeck replied.

NoMa residents said they are happy to see initiatives being put in place to discourage gun violence, but they also have concerns.

Fernandez said she hopes the new initiatives are  effective, but she does have concerns about the wider impact when it comes to the community.

She said she lives in a “pretty diverse” neighborhood, and she is concerned about an increased police presence based on what she has seen recently around police interactions with marginalized populations, especially when weapons are involved.

“We’ve seen very publicly how well that can go, depending on the community that you belong to and how you’re perceived by members of law enforcement,” Fernandez said.

Jay said she is also happy that MPD is attempting to do something to discourage gun violence, but she hopes it doesn’t stop there.

“I just hope that they don’t use that as a ‘well we’re tryin’ — we don’t have to do anything else because, you know, we’re gettin’ stuff. We have a number here, here you go,’” Jay said. “Like, we can’t stop there.”