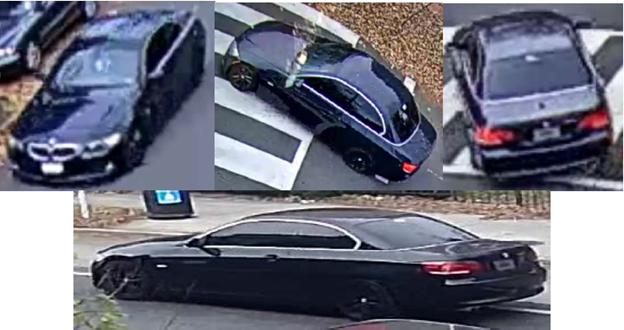 The Saturday shooting at the unit block of I Street SE comes amid a 2% rise in crime in the nation’s capital, with an estimated 200 homicides reported in 2021 alone.

In a statement from MPD’s First District issued Sunday, the shooting occurred approximately at 2:50 p.m. in the unit block of I Street SE.

The victim was then transported to a local hospital after sustaining multiple gunshot wounds and was treated for non-life threatening injuries.

According to Alan Henney, a freelancer who tweets breaking crime news in D.C., the shooting was initially a shots-fired complaint.

Henney said the BMW 328xi Coupe in question has been suspected of being involved in a recent string of robberies and attempted carjackings beginning four days ago when the black BMW was stolen.

“Usually it’s a group of three males, late teens, early 20s. There was also another auto accompanying it in at least one of the incidents,” Henney said.

While the incidents haven’t been officially linked, Henney said it appears they might be.

“Using a luxury car for robberies and carjackings is a brilliant idea because most people don’t worry too much when a luxury car pulls up behind them in a dark alley, but they need to think outside the box,” Henney said.

The shooting in Navy Yard comes five days after D.C. police data confirmed that the District reached 200 homicides in 2021.

According to data from the Metropolitan Police Department, the last time the District reached 200 homicides was in 2004, when 248 homicides were reported.

The 200th homicide reported this year was a man found shot dead at a Shell gas station in the 4700 block of South Capitol Street.

LaTrina Antoine, editor-in-chief of D.C. Witness, said the non-profit has been tracking homicides in the District since 2018, which had 158 reported cases, and have seen a rise since then.

Antoine said there was a rise in reported cases between Jan. 1 and Nov. 28 of this year, with 216 cases being reported so far in 2021.

Antoine attributes the rising tide of gun-related violence in the neighborhood to the gun culture in the District, which has been growing over the past few years.

“With those homicides, a lot of them are related to a gun culture that is in the city because a lot of the homicides are being caused by fatal shootings,” Antoine said.

According to D.C. Witness’ Data Explorer, Ward 6 is the ward with the third largest number of homicides with 20 reported cases in 2021, preceded by Ward 7 with 42 and Ward 8 with 58.

MPD is asking for public help to identify and locate the vehicle used in the weekend shooting, offering a reward up to $10,000 for anyone who provides information leading to the arrest and conviction of the person or people responsible for the crime.