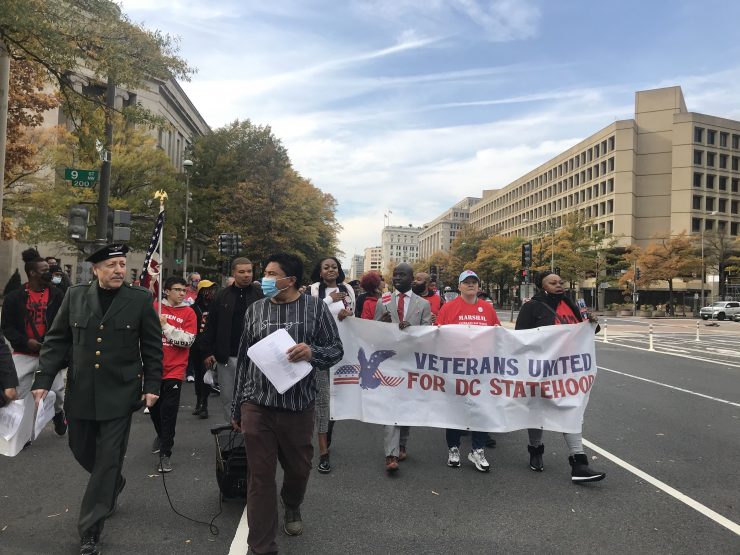 About 50 veterans, public officials and residents marched Thursday to make a case that lawmakers owe it to those who’ve served in the military to receive voting representation in Congress by making D.C. the 51st state.

“We have American citizens who have served this country, many who have given that last full measure of devotion, who come back, sometimes in a box draped with a flag that doesn’t even have a star for the place that sent them,” said shadow Sen. Paul Strauss, D-D.C. “We can’t let this continue.”

In April, the House passed a resolution, introduced by Del. Eleanor Holmes Norton, D-
D.C., that would make the District a state with two senators and one representative with voting ability in Congress.

Norton, who’s represented D.C. as a non-voting delegate in the House since 1991, introduced a House resolution Tuesday aimed at recognizing D.C. veterans and calling for the passage of the D.C. statehood bill.

At one point during the march, Rodriguez joked that if people didn’t support D.C. statehood, they’d be hit by an eagle and see 51 stars. At another, he raised a fist in front of the Trump International Hotel and chanted, “Statehood now.”

Americans are split about half-and-half on the issue of D.C. statehood. Veteran Susan Kreft said she completely supports making the District the 51st state.

Kreft, who served the U.S. Army more than two decades ago in Saudi Arabia, said she normally commemorates Veterans Day in some way every year.

“For the numbers that D.C. generates as far as population, GDP, federal tax base, with us not having representation — voting members of Congress — seems shameful,” the 12-year D.C. resident said.

“Of all of the people in the District who face not having representation, not having an equal voice, it feels like it’s most impactful to those who serve the country,” said Shuff, who previously served as D.C. Mayor Muriel Bowser’s campaign manager.

In January, Bowser released a statement calling on lawmakers to get statehood to President Joe Biden’s desk within the first 100 days of Congress being in session. That didn’t happen.

In April, Sen. Roy Blunt, R-Miss., released a paper arguing that D.C. would be relatively small compared to other states and it would be hyperpartisan. (D.C. voted for Biden by 93% in the 2020 election.) In June, the Senate Committee on Homeland Security and Governmental Affairs held a hearing to discuss the issue, but the Senate statehood bill hasn’t been brought for a vote.

Cassandra Likouris, president of Students for D.C. Statehood, said she’s troubled by the fact that D.C. residents pay more federal taxes per capita than any state but don’t have voting representation in Congress.

Sharece Crawford, at-large committeewoman for D.C.’s Democratic Party, said Thursday that her grandmother wasn’t able to vote in presidential elections. D.C. residents weren’t allowed to vote in federal elections until the 23rd Amendment gave them that right in 1961.

“My children and their children will be able to vote for a congresswoman that has a vote in Congress,” Crawford said. “Our children today — our future children — will be able to have the rights and liberties as full citizens because of all of you today.”