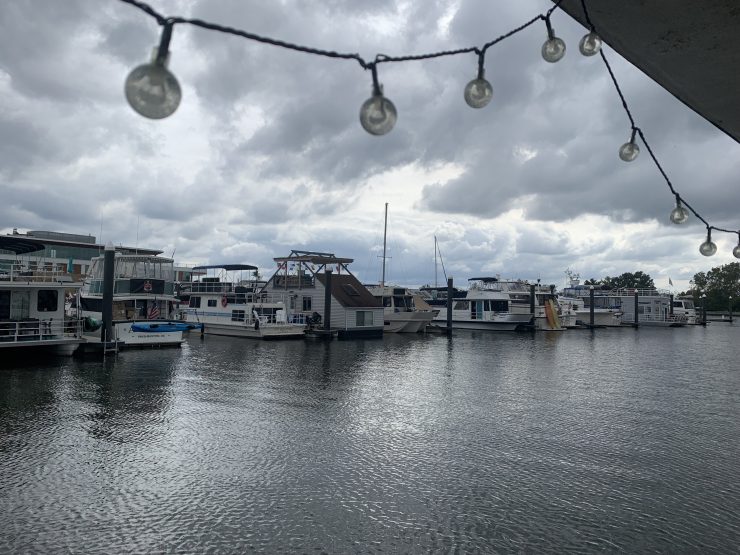 District Wharf views the liveaboard boater community as an important example of innovative housing solutions, diversity, and an important partner in maintaining the health and safety of the Washington Channel.

In Southwest Washington D.C., just off the bustling boardwalk of District Wharf, where high rises and twinkling lights cast vivid reflections into the water, lives a small but invaluable waterborne community.

Jason Kopp, the President of the Gangplank Slipholders Association, told The Wash, at first glance, “it just looks like a bunch of boats” but Kopp said that when you get closer, it’s easy to see it’s a thriving floating community.

The Gangplank liveaboard community was formed in 1977, long before the revitalization of The Wharf, and is made up of 88 residents who live on their boats full-time. Those residents come from all walks of life, bound together by their love of the water. They are also a part of the larger Wharf Marina community that includes the Capital Yacht Club.

The Gangplank community prides itself as the largest liveaboard community on the East Coast and an integral part of the larger Southwest waterfront community.

Kopp said he came to the Southwest waterfront from Monterey, California 14 years ago, to live close to the water.

“I was like, I better find something really amazing out here on the East Coast…and it turns out, I did,” he said.

Kopp told The Wash boating life also offers a more economical housing alternative amid the growing cost of living in the United States.

Right now, the Gangplank community is hidden behind the Phase 2 construction of District Wharf. Phase 2 will complete the mile-long privately funded revitalization of the Southwest waterfront with the addition of 1.25 million square feet of mixed-use development and 223 new slips along the marina. Kopp says those new slips are expected to fill up right away.

In addition to new slips, The Wharf is investing in brand new facilities for its floating residents. The building is already under construction on a new concrete pier in the phase 2 area.

The facilities are a small token in what is expected to be a $1.1billion price tag for Phase 2. The development is also expected to include an additional 115 affordable and workforce apartments, retail space, and parks, all meant to cater the growing population in the Southwest region.

On their website, District Wharf declared that the finished project will result in “a seamless blend of people of all walks of life living and enjoying their neighborhood together.”

Co-developers of The Wharf, Hoffman Associates and Madison Marquette, said Water Building 2 will house services for the liveaboards and retail on the ground floor; and fill the top floor with a restaurant and bar. The building will be complete with an aesthetic green roof-scape.

Tara Stutsman, who will celebrate her one-year anniversary as a liveaboard boater in December, said she’s looking forward to having those new amenities.

“I’m one of the liveaboards that makes full use of the building in its present form right now, so I’m definitely looking forward to seeing what the amenities and what the showers and the bathrooms and the laundry machines are like once it’s all open,” said Stutsman.

Several slip holders like Greg Whittier, the Vice President of the GPSA said that they’ve gotten used to living near the construction and are excited about its completion.

But the liveaboards aren’t just floating residents, their active members in the larger Southwest waterfront community.

As the construction along The Wharf has progressed, Kopp said developers have been increasingly interested in partnering with them on different environmental projects in an effort to maintain the health of the Washington Channel.

A few weeks ago, the Gangplank community partnered with The Wharf and outside volunteers to clear logs, trash and other debris from the river. They do this about once a year.

Patrick Revord, the Director of Technology, Marketing, and Community Engagement for The Wharf, said that cleanup is vital to the health and safety of the Washington Channel. The logs and debris pose serious hazards to boats, and in some cases, can even get stuck and break off the rudder or propeller.

This year, with the help of the liveaboards and members of the public, they collected 187 pounds of trash and a dumpster full of logs.

Revord told The Wash the week-long effort was “a huge success.”

Kopp said that development along The Wharf has created a positive impact on the Washington Channel.

“A good aspect of The Wharf project is that I think it really attracts people to the water and hopefully helps people want and care about the water and care for our rivers out here,” Kopp said.

Revord said The Wharf views the liveaboards as important partners in maintaining the health of the channel, and as a vital part of the greater waterfront community.

“It’s a really symbiotic relationship. I would say The Wharf is made better by the water [residents],” he said.

That sentiment was reiterated during “Liveaboard Boater Day” on October 9th. The day was officially declared in a ceremonial resolution written by Ward 6 council-member Charles Allen and read aloud by a representative from his office.

The resolution defined the liveaboards as a vibrant community and highlighted the importance of the floating residents as an “embodiment of diversity, inclusion and an example of innovative housing solutions.”

ANC 6D representative Andy Litsky addressed the crowd during the celebration, praised the community for the example they set in creative, affordable housing and repeated their importance to the Southwest waterfront.

Long-time residents like Roger Thiel grabbed the microphone and shared what the community means to him during the event. Thiel, who has been a slip holder for over 32 years, said there’s nowhere he’d rather be than “on the journey of this waterborne life.”

“It’s a very mixed population and so everybody fits in,” she said.

Although it’s a small community in the greater picture of the Southwest waterfront, Revord said The Wharf would keep working hard to keep the liveaboard boating community happy, and engaged for many years to come.

“The Wharf is really built on being a maritime destination, or working waterfront, and the liveaboard community brings that to life,” Revord said. “They’re out there, working on their boats, living on their boats, and making the water a really lively place.”