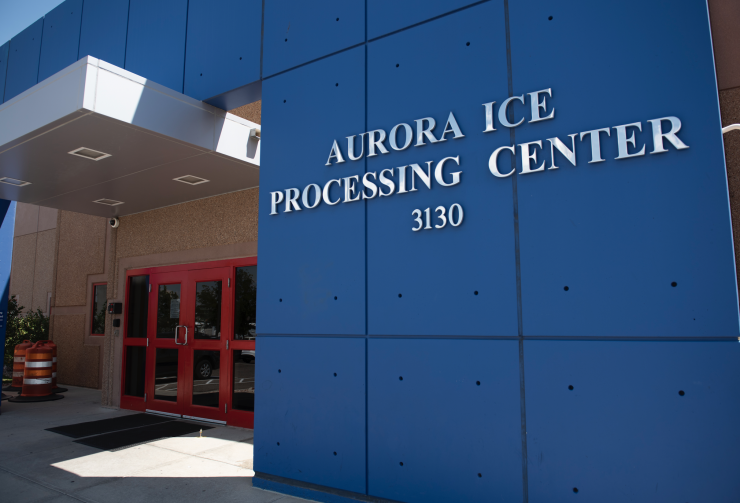 Thousands of immigrant children, men, and women detained inside secured facilities by the United States Customs and Immigration Enforcement Agency have contracted the COVID-19 virus.  According to ICE documents, at least eight have died while awaiting decisions on asylum or deportation.

Detainees across the country have also filed other health related complaints regarding abuse in ICE detention centers, poor living conditions and medical neglect.

In Virginia, the Farmville detention center is one of several locations where the percentage of those incarcerated who had tested positive for COVID-19 approached the 50% mark.

Farmville, in December, officially reported one related death and 339 confirmed cases, 49% of their population.

According to advocates, detainees are often packed in jail cells, making the Center for Disease Control’s social distancing guidelines practically impossible to enforce. The crowded conditions led to several outbreaks over the summer.

Katy Murdza, immigration justice advocacy manager at the American Immigration Lawyers Association (AILA), said back in June, they filed a formal complaint with the Department of Homeland Security after receiving 17 health-related complaints from different individuals at 11 detention centers across the country.

“We were hearing about a lack of personal protection equipment, failure to test, failure to isolate people that were infected or may have been infected, failure to provide treatment to people who were symptomatic,” Murdza said. “It’s just a continuation of what we had been hearing for years. “

“I’ve spoken to people in detention who believe they likely may die before they’re released just because of the absolute lack of preventative measures,” Murdza said.

The Department of Homeland Security declined an interview regarding their management of the spread of Covid-19 in their facilities.

Instead, DHS sent a statement that included, “ICE released over 900 individuals after evaluating their immigration history, criminal record, potential threat to public safety, flight risk, and national security concerns,” The statement also said. “The same methodology is currently being applied to other potentially vulnerable populations currently in custody.”

Murdza said they continue to see detainees with health conditions that put them in high-risk categories, not released from detention.

A Pennsylvania-based AILA attorney, who asked that her identity be withheld from publication to ensure her comments would not impact her client’s cases and safe living conditions, believes ICE’s changes won’t fix the problem. Instead, she thinks preventing the spread of any illnesses in ICE detention centers should start at the border. She said that being packed in what some call “ice boxes” is where the disease quickly spreads.

“They’re sick, but it’s because of the United States government. When they come here sick, it’s because we made them sick,” the attorney said. “As soon as my client crossed the border, she was separated from her kids and put in the icebox.”

In a circumstance similar to the COVID-19 outbreaks, the attorney said that one of her clients, who had high blood pressure, was detained during a massive flu outbreak. Her client, who wished to remain anonymous, escaped violence and abuse from her husband and local Tiawanna gangs. They reportedly threatened her life after witnessing a murder, only to face more inhumane treatment in the states.

“She sat in there without her blood pressure medication because they threw it away for over ten days,” the attorney said. “They keep it 55 degrees, the lights are on for 24 hours a day, and they get maybe a burrito here and there.”

After calling several times to check on her client, the attorney said once she made it to the detention center, she found out her client had a blood pressure incident and still was never given any medication.

This was not the only instance where she feared for one of her client’s lives. The attorney said she also represented an 18-year-old boy who required a higher level of care. She called officials at his detention center to ensure he received the necessary treatment.

“I would constantly ask for a high level of care, and it would get denied. I tried to find out who the physician was working in the facility,” the attorney said. One of the attorney’s biggest concerns is that the quality of physicians that ICE hires is not up to par.

“One thing I’m really curious about is their practices in hiring physicians because this physician was a local one, and I couldn’t find any information on him,” she said. “I tried to call his office, and he could not be found. All he had was a listing on Google.”

The 18-year old reportedly told his attorney about fears he would die in the ICE detention because doctors were not providing him proper medical care. After sharing that, the young man said he was later punished for revealing his issues.

“I called and expressed that he needs a better level of care again, and he was placed in solitary confinement for a week,” the attorney said.