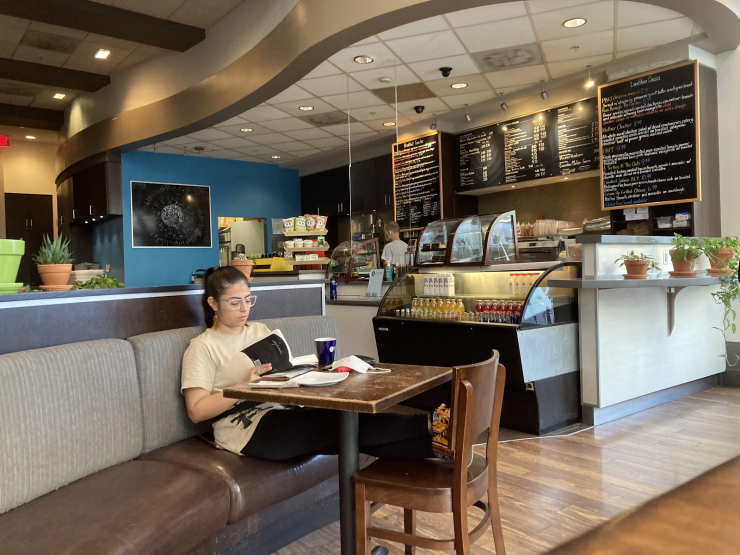 D.C. business owners are eyeing the possibility of another lockdown as COVID-19 cases surge across the country. But they don’t know if their businesses can sustain another closure.

Due to COVID-19, the deadly virus responsible for the death of over 200,000 people, some coffee shops are seeing fewer visitors these days. The usual study group sitting in a corner to prepare for finals is no longer there. The person who just needs to use WiFi can’t because sitting inside isn’t always an option anymore.

Almost nine months into the pandemic, some local coffee shops have hit a plateau in their businesses. Others have not survived.

According to a report by Food and Wine magazine, 2020 will be the first year since 2011 that the number of coffee shops across America will decrease.

Yahya Sardari is one of the many coffee shop owners in Columbia Heights. His coffee shop, Coffy Café, has been around for seven years. It’s known for its ‘60s theme atmosphere and savory crepes. When the pandemic hit in March, Sardari, like all other business owners in D.C., was forced to close down.

Sardari said when the Coffy Café reopened in May, there was a spike in service. But customers were only allowed to take their beverages and meals-to-go at the time. Now, the coffee shop’s business is moving at a steady pace.

“Once we had the confirmation from D.C., to be able to have 50% capacity, then we went up,” Sardari said, referring to an increase in business during the summer. “Now we are in a plateau. I guess people don’t feel comfortable coming in.”

The National Coffee Association (NCA) recently released a visual report detailing coffee consumer data and how Americans have changed their routines in how they go about getting their coffee during the pandemic.

According to the report, Americans have purchased fewer coffee products inside stores while increasing online purchases instead. The use of apps to order coffee has increased by 63% and drive-through orders have increased by 13%.

Now with the shops and businesses reopening to a limited capacity, Sardari still worries about the possibility of having to close down his coffee shop again.

Over the past two weeks, COVID-19 cases have been continuously rising in D.C. After celebrating the election results, more people wanted to get tested. On Nov. 14, there were 2321 COVID-19 cases reported in Maryland, according to the Maryland Department of Health. On the same day in Virginia, there were 970 cases, but on Nov. 16., the number jumped to 2071 new cases.

Some states like California and Michigan have already begun to roll out restrictions again, such as shutting down indoor dining and limiting indoor gatherings. Iowa has started a mask mandate. Some people are saying this is only the start of what is soon to be a second lockdown, one which many businesses can’t afford.

Coffy Café, like many other local businesses, received aid from the Paycheck Protection Program (PPP), a loan designed to help small businesses pay their employees. But that program ended on Aug. 8.

Like the Coffy Cafe, Tynan’s Coffee & Tea is also experiencing a steady, yet slower business. Some customers decide to sit inside but more often they take their drinks and meals to go.

The owners, two twin brothers, John and Thabo Richardson, 34, have noticed their customers are taking their orders to go while also purchasing coffee beans so they can make their coffee at home.

“There’s just not a huge demand for people to be hanging out in coffee shops in the afternoon,” John Richardson said. “We used to see teachers after school, students after school or tutors doing tutoring sessions or impromptu group meetings. None of that is happening now.”

Coffee shops usually have a quiet atmosphere aside from the tinkering of a barista fixing drinks or prepping meals. But now, some coffee shops are experiencing ghost-like qualities with little to no customers at all. Sankofa Video Books & Cafe, a D.C. based African coffeehouse, hasn’t reopened their coffee shop. Customers are only able to enter to purchase books and videos.

Local coffee chain ‘Philz Coffee’ in Adams Morgan has also experienced an increase in their app.

Abie Siegal, 35, the store leader at Philz Coffee, said Philz isn’t allowing customers to sit inside right now which has had a significant impact on the relationships between the service provider and the customer.

But for Siegal, she doesn’t want to put anyone at risk of getting sick.

“I just worry about people,” Siegal said. “I worry about the humans first before the business.”

Megan Reilly, a team leader also working at Philz Coffee, has noticed more customers lately. Reilly said that when Philz Coffee reopened, customers were waiting outside in lines. Reilly said she thinks the long lines were from people desperate to get out of their house after being cooped up for so long. They needed a break.

Now, Reilly is concerned about how a second shutdown might change that. People may not feel comfortable leaving their homes as much as they did the first time.

“I’m definitely a little bit afraid of how shutting down will impact people wanting to come out again after a second time.”