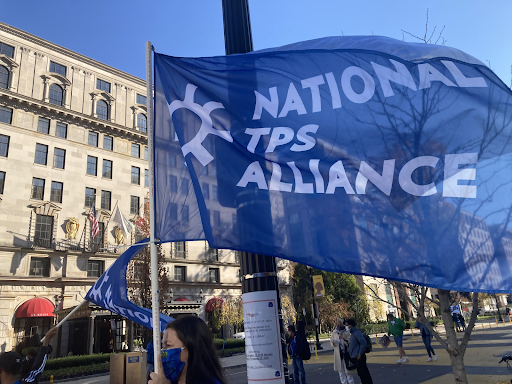 Temporary Protected Status (TPS) recipients, organizers and allies gathered at a rally at the Black Lives Matter Plaza on Friday afternoon to push Congress to create a pathway to citizenship for immigrants and to save programs and statuses that protect immigrants.

Temporary Protected Status beneficiaries from the National TPS Alliance organization and immigration advocates rallied together at the Black Lives Matter Plaza in front of the White House Friday to push Congress and President-elect Joe Bide, to save TPS, a status granted to nationals of countries affected by political conflict or national disasters.

National TPS Alliance is an advocacy organization geared toward promoting the rights of immigrants and TPS holders.

Before the rally, organizers and TPS recipients were seen driving through the Columbia Heights neighborhood honking and waving dark blue flags with the words “Save TPS!” Local TPS recipients living in the area waved the El Salvadorian flag in salute.

National TPS Alliance organizers and recipients were seen stepping out of a big colorful bus named “La Libertad.” D.C. is the last stop for the riders, who originally started their trip in Los Angeles in late September. They drove through other cities around the United States to protest the Trump administration’s strict immigration policies and to educate people about the “Save TPS” movement.

Trump supporters weren’t too far away from the BLM Plaza, as they were preparing for their own rally and march on Saturday to protest the election results and demand a recount for all states.

Last Saturday, multiple media outlets announced Biden won the presidential election with 284 votes, defeating President Trump who had 219. Biden’s win gave hope to many TPS and DACA recipients who face deportation if their statuses and programs are not extended or renewed.

On Biden’s website, his platform for immigration states that he will “immediately review every TPS decision made by the Trump administration and overturn all those that do not appropriately consider the facts.”

Trump supporters and pro-life advocates stuck around to see TPS recipients and activists chanting “What do we want?! Residency! When do we want it?! NOW!”

‘We love you but go find your own country!’

A few Trump supporters were seen having tense conversations with allies of the TPS and immigrant community.

Katherine Spivak, a 52-year-old Trump supporter, drove from Clearwater, Florida, with her family to Columbia, South Carolina, to ride with the “Stop the Steal” caravan to D.C., to protest the election results.

At the TPS rally, she told the crowd “we love you but go find your own country!”

Spivak said she doesn’t want immigrants to come to the U.S. if they are going to “bring communism with them.”

“Some of these other groups are spreading violence and their messages are to hurt Americans,” Spivak said. “But we aren’t backing down.”

While Trump supporters watched the TPS rally from afar, speakers and musicians took turns to share their personal stories, chant or sing songs in unison.

Will Biden keep his word?

Lenda Esmaralda, a 19-year-old TPS holder from El Salvador, came from Virginia to attend the rally. She recently lost her mother due to COVID-19, leaving her with her dad, who also has TPS, and her brother, who is a U.S. citizen. Esmaralda hopes Biden keeps his word because if not, her and her father could risk being deported, which would leave her younger brother in the U.S. alone.

Esmaralda, like all other TPS recipients, is waiting anxiously to see what Biden will do.

“He said on his first day he’s going to make a pathway for undocumented immigrants,” Esmaralda said. “But I have to wait to see what he’s going to do.”

According to the U.S. citizenship and Immigration services website, the TPS status for El Savadoreans will end on Jan. 4, 2021. Biden is scheduled to take office two weeks later, which would force the recipients into an “undocumented” status or without protections, meaning Trump could still deport them as one of his last major actions.

Like Esmaralda, Melissa, 24, who only gave her first name to protect her identity, also has temporary protected status, but she’s from Haiti. Melissa is part of the National TPS Alliance’s Executive Committee and Youth Committee. She said she hopes Biden will give permanent residency to both TPS holders and DACA recipients. Melissa said former administrations have said they wanted to help TPS recipients and immigrants but they never followed through.

Members from the National TPS Alliance don’t plan on stopping their movement after Biden is in office. They will continue to put pressure on the future administration and Congress to create legislation protecting recipients and a pathway to citizenship.

Diaz came to the U.S. from El Salvador in the ‘80s. He was granted political asylum at the time and is now a U.S. citizen fighting for the rights of other immigrants. “I knew how hard it was for me to go through all that,” Diaz said. “I’ve always been involved in immigration issues.”

TPS recipients will have to wait until Jan. 20, 2021, to see if Biden will keep his promise of creating a pathway to citizenship.