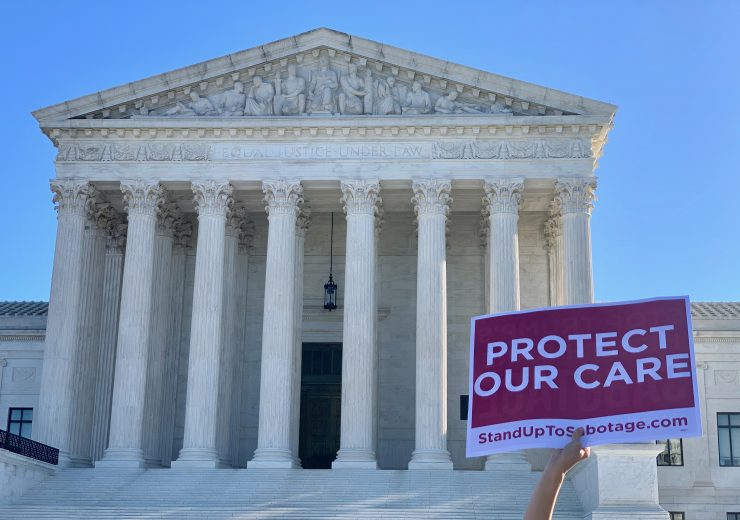 More than 50 people attended a rally outside the Supreme Court on Tuesday to voice their concern with the latest challenge to the Affordable Care Act.

Mia Ives-Rublee, 36, who traveled from North Carolina to the Supreme Court with her support animal, Zini, protested the latest challenge to Obamacare, which the court began hearing oral arguments for Tuesday.

“I am severely worried about the effects it will have on my health insurance, and my ability to get health insurance,” said Ives-Rublee, who has several pre-existing conditions, including a heart condition and osteogenesis imperfecta, also known as brittle-bone disease.

California v. Texas, for which the Supreme Court heard oral arguments virtually on Tuesday, is the latest Republican-led legal challenge to the Affordable Care Act, which was one of President Barack Obama’s biggest priorities while he was in office.

In the case, two individuals and 18 states led by Texas argue that part of the health law is unconstitutional. They argue that when Republicans changed part of the health law in 2017 to make the penalty zero for not following the individual mandate, the law itself became unconstitutional. And because of that, the whole law now has to be struck down.

Experts say this is the weakest challenge to the ACA, but they note the Supreme Court is heavily conservative now, with the recent appointment of Justice Amy Coney Barrett, who as a law professor voiced criticism of the health law.

“The appointment of Amy Coney Barrett makes it seem a lot more threatening,” said Sarah E. Raskin, 46, a D.C. resident, “because now we have a court that is packed with people who want to dismantle the ACA under Trump’s and McConnell’s strategy to pack the court with people who are hostile to the health care rights of all who live in America.”

And that could happen during a global pandemic. More than 238,000 people have died from the coronavirus nationwide, and more than 10.1 million cases have been reported.

“I continuously try and be extremely careful,” said Ives-Rublee, who noted she also has lung scarring from pneumonia. “I’m on the very outskirts of this rally, and I have to make sure that I be very careful because as an individual with pre-existing conditions, I’m more susceptible of getting severely ill.”

Zyah Brown, 9, was one of the performers and came out with her mother, Danielle Champ, and her younger sister. Brown, who wrote a spoken-word piece for the event, said her piece focused on “how youth can use their art to make the world a better place.”

Attendees hoped that their activism would make a difference in how the Supreme Court ruled on the case. The justices have to determine whether the plaintiffs have standing to bring the case, whether the individual mandate is unconstitutional and, if so, whether the entire law must fall.

“He got a bill at the end of that: half a million dollars,” Severance said. He said his friend “would have been dead without the ACA,” because he would not have been able to afford the bill.

“There’s humans involved in this, and I don’t know how those people sleep at night who are trying to repeal this,” Severance said. “It’s appalling.”