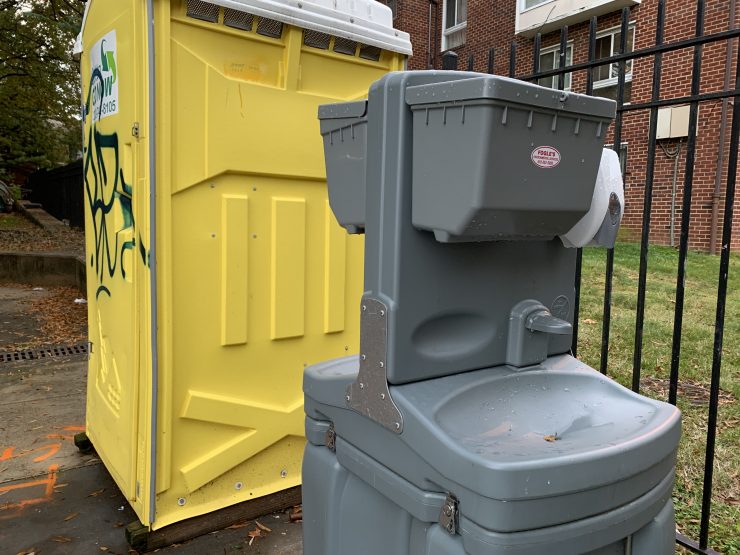 No soap, water in hand-washing stations at Ward 2 tent encampments

Federal guidelines encourage the city to provide soap, water and hand sanitizer to those living in tent encampments with more than 10 individuals.

Ward 2 Mutual Aid and the People for Fairness Coalition, two advocacy groups that focus on community assistance over government intervention, plan visits to the Shaw, Foggy Bottom and NoMa neighborhood encampments each week. They aim to know the residents living there, address their needs and work to ensure they are met. Two Ward 2-area encampments currently need water in their hand-washing stations, and the third needs increased toilet sanitation.

“The hand-washing stations at the O Street and NoMa encampments don’t have water. The Foggy Bottom encampment is the only one with water,” activist Qaadir El-Amin, 41, said. “We check each week when we go out there, and O Street hasn’t had water for a while.”

Reggie Black, the People for Fairness Coalition’s advocacy director, wonders if the issue is negligence “on the front line” or from the District’s Department of Health and Human Services, which he said manages the hand-washing stations and portable toilets.

Washing with soap and water is one of the most important ways to keep yourself safe – and protect others – from the coronavirus, according to the CDC. If individuals experiencing homelessness cannot properly keep clean by washing their hands regularly – like so many can do in their homes – they can contribute to the spread of the deadly virus.

The Wash visited the Shaw-area encampment at O Street & New Jersey Avenue NW on Oct. 31, and a hand-washing station’s service record sticker indicated the last date of service was Aug. 3.

The District’s Department of Health and Human Services’ public information officer did not respond to requests for comment.

Ward 2 Mutual Aid and the People for Fairness Coalition, or PFFC, promote community by “knowing your neighbor, and when you know your neighbor, you don’t hate or discriminate against your neighbor,” said El-Amin, who is a member of each organization.

El-Amin merged the work of the two groups in early October. They use monetary donations to buy supplies, which they distribute during their visits.

Those living at the tent encampments on E & 20th Street NW want more frequent sanitation and a sturdier toilet, some said.

“The port-o-potties we have are for events, while we’re using them every day. I see someone from the city come and clean them up only once each week,” Marianna Worthington, 59, said. She said she’s been living in the E & 20th Street encampment for almost two years. “I’m thankful for all that the city does to help us, … but we need working sinks and flushable toilets.”

The PFFC wants the city to service each hand-washing station at least five times each week, Black said.

Ward 2 Mutual Aid began their work after Serve Your City – a nonprofit that runs Ward 6 Mutual Aid in partnership with many other organizations – donated thousands of dollars to the group. This money has gone toward food, masks and other supplies for homeless residents in the District. Without this donation to spearhead Ward 2 Mutual Aid’s work, the organization likely would not have identified the unserviced hand-washing stations and portable toilets.

Serve Your City’s mission is “Solidarity, not charity!” emphasizing meeting people where they are and supporting them – with money, resources or even a listening ear – instead of “saving” them.

“Everyone deserves not to worry about the basics. Housing and eating are human rights, and it shouldn’t be commodified for the privileged class,” said Maurice Cook, Serve Your City’s executive director.

“It’s a lofty goal, but we can do it over time,” Cook said. “Folks who are recipients of [our work] don’t have to worry about the basics quite as much, then they have more capacity to build and support others.”

“We want to create a system that relies on your community instead of law enforcement,” said Nathan Park, 24, who volunteers with Ward 2 Mutual Aid. “When the pandemic hit, the thinking was not only how will we take care of ourselves, but how are we going to take care of everyone?”

For more information or to learn how to get involved: