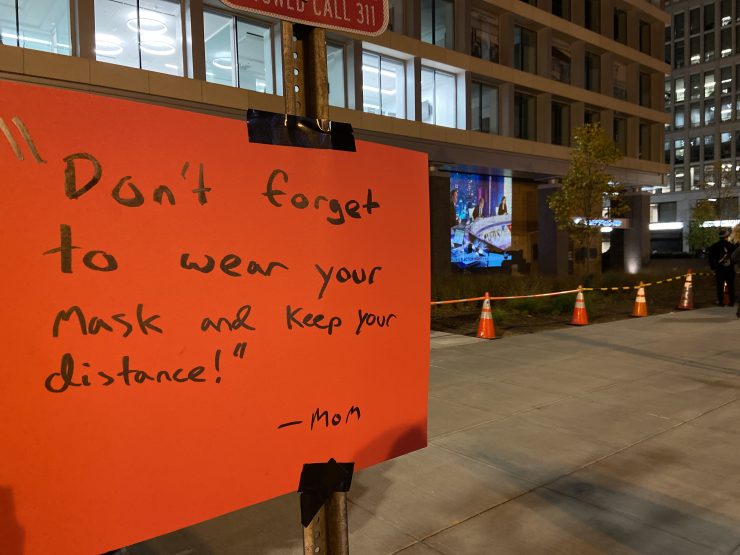 The 2020 elections have people on the edge of their seats and out of their houses while they wait for the results of who will be the president for the next four years.

Not even the pandemic stopped people from gathering in front of the White House, along the Black Lives Matter (BLM) plaza, as polls closed during today’s general election.

Democratic supporters, reporters, tourists, and various other organizations were some of the people that gathered to wait for the presidential candidate results next to President Donald Trump who stayed in the White House during election night.

Different reasons brought people to the concurred street during the cold November night. “I guess, I just wanted to be here to see what was gonna happen and be where the action is,” Grace Plihal, 26, said.

Plihal, who studies at the University of Maryland, voted early and in-person for the Democratic candidate Joe Biden. She said that during the day, she “sat around and panicked.”

Pilhal, who was accompanied by Lauren Paniati, a 26-year-old social worker, said that she voted for Biden because her mom would “kick me out of the house if I didn’t.”

Pilhal and Paniati were a few of the people sitting on the plaza’s sidewalks and watching the action. Most of the present were taking pictures with their phones, chanting choruses like “Trump your fired, Trump Trump your fired,” or expressing their thoughts through banners.

Most of the night went along without discussions or fights. The only Republican in sight, a man wearing a red “Make America Great Again” t-shirt, cursed and insulted others on the Washington D.C. street.

One of the most notable things during the night was the media crews present along the Black Lives Matter plaza. News organizations like The Washington Post and Univision reported from in front of the White House.

When walking between the camera equipment and people, most of them masked, plaza spectators listened to different sounds; recordings of religious messages, bands, and radios playing 80s rock music. It was impossible to feel alone among the crowd.

The BLM plaza was also host to a mini watch party sponsored by a man wearing a Biden-Harris cap. The projector was presenting an ABC coverage of election results.

Sunrise Movement was one of the organizations using the moment to bring awareness to their message. Haley Sandoval, a 21-year-old volunteer of the DC office of Sunrise Movement educated passers-by on possible election outcomes, for example, if a candidate declares victory before all the votes are counted.

Sunrise Movement is an environmental organization that has spoken out more on environmental racism since the death of George Floyd. This election will have an impact “on the future of our climate,” Sandoval said, and the future of the “racial system here in the United States.”

Although Sunrise Movement is a nonpartisan organization, Sandoval said on a personal note, she cast her first presidential vote for Biden.

Many of the present were euphorically expressing their desire for the current President of the United States, Donald Trump and his vice president, Mike Pence, to leave the White House.

Yet the Movement for a People’s Party captured people’s attention by handing out hot chocolate, projecting messages on the church wall, and walking around wearing a giant Trump looking mask. They are a group of people hoping to form a third political party for future elections.

“We’re just trying to enjoy the moment,” Felipe Fernandez, 33, who was in the capital for the first time during a presidential election, said. He said the mask was not meant as a satire of the current President of the United States.

Fernandez, who came from Maryland, voted for the Green Party. He said he voted for a candidate that was not Republican or Democrat because his state is “not a swing state.”

As the night has progressed, results have been announced, yet, there is still no winner of the presidential election.