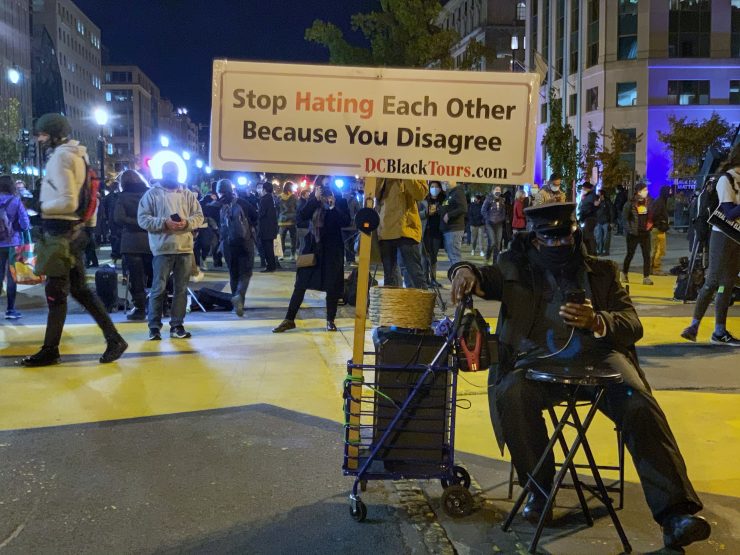 Hundreds gathered several blocks from the White House on Tuesday night to celebrate the 2020 election.

The People’s Watch Party, held in Black Lives Matter Plaza and McPherson Square, has so far been a largely peaceful community event, attracting people from across the country. Many attendees described the atmosphere as being jubilant despite the polarization of the race.

Ben Walton, who drove from California with a friend to witness Election Day in the nation’s capital, dressed as President Trump at the outdoor gathering, wearing an orange suit, red ‘Make America Great Again’ hat and holding a sign reading, “Need a ride to Russia on Jan 20th Moscow or Bust.” However, his hope for the night isn’t that one particular candidate will win over another, but rather that people will “relax and be more civil to each other,” he said.

“We’re out here to make people laugh – hanging out, having a good time, seeing what’s going on,” Walton explained. “The last four years have been pretty untenable. We can’t do another four years where we’re at each other’s’ throats all the time, especially with coronavirus being such an issue. Hopefully, everyone can get along with the result no matter what. I won’t be bothered if Trump wins; I won’t be bothered if Biden wins. I just hope we can all be more civil to each other.”

Music, dance and visual arts were prominent elements of the gathering. A gogo-band played instruments and sang from a truck next to McPherson Square as a crowd gathered. Several people danced along to the music as a line of police officers stood across the street in front of boarded-up businesses.

Behind the block party, in the square, more subdued attendees watched election night results roll in on a jumbotron.

In BLM Plaza a dance group called The People’s Dancers formed a circle in the crowd, first performing and then teaching their choreography to their audience. Owoada Ayorinde, the creator of the dance troupe, said that the point of their work is to de-escalate crowds during protests.

Over the past eight months, waves of protests across the country frequently devolved into violence, whether between protesters, or protestors and police. Given the tense nature of this election, as some watch party attendees characterized it, police in the District geared up for a potentially volatile election night. However, few violent or hostile incidents broke out at the gathering.

One of the people holding a sign with the name Jesus on it was Silvia Roca. A native Spanish speaker, Roca’s husband translated for her, explaining that they were there to pray for President Trump and had been there every day for the past 21 days.

“I believe God is going to use the president for the betterment of the country, to establish principles and values to the country,” Roca said.

Though the gathering was primarily peaceful, there were many vocal anti-Trump attendees. Peter Dennis and Claudia Brown started Americans for Impeachment in 2019, pushing for the president’s removal from office, which they said, “Congress dropped the ball on.” They’ve re-crafted Trump’s slogan from The Apprentice, Dennis explained, with their slogan becoming, “Trump, you’re fired.”

“We’re here today to celebrate with the American people and to see through what Congress couldn’t do,” Brown said.

According to the Metropolitan Police Department, three people have been arrested in relation to protests at the gathering. Another Watch Party is planned for Wednesday afternoon in BLM Plaza, according to the People’s Watch Party website.