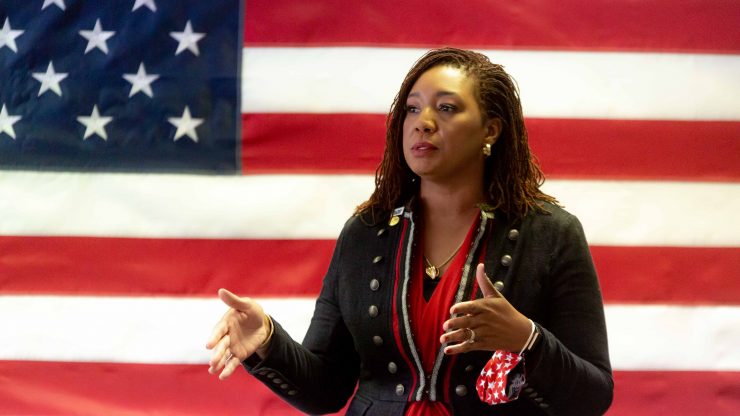 The Wash spoke to four Black conservatives about their support to reelect President Trump for a second term. Four of them walked into a voting booth today to vote to reelect the president while one has already cast her vote by mail.

Heading into Election Day, Black conservatives are ready to cast their vote to reelect President Trump for another four years.

Nov. 3 has been an important day for Americans, as historic numbers of people turn out to vote either in favor of Trump receiving a second term or vote in support of his challenger, Democratic candidate and former Vice President, Joe Biden.

This comes at a time where the country is facing an ongoing battle with COVID 19, which continues to take American lives every day.

Aligning with the party platform

Stacy Washington is a decorated Air Force Veteran, conservative columnist and currently the co-chair on the Advisory Board for Black Voices for Trump, an organization that encourages the black community to support President Trump. During the 2016 primaries, Washington originally supported Ben Carson then made the decision to vote for Ted Cruz.

Washington said before Trump won the GOP nomination back in 2016, she spoke to Trump supporters in her local community to find out why they were voting for him. They told her that he wasn’t a politician. Washington took that into consideration as she searched his campaign’s website to learn more about his stances on issues that were important to her.

“I don’t vote blindly,” Washington said. She compared Trump’s platform to the Republican Party’s platform to see if they were closely aligned. And voting for Hillary Clinton wasn’t even an option.

“I took a chance knowing that at the very minimum he would be adhering to the platform which was very important to me,” Washington said.

Marie Stroughter, a 56-year-old from California, like Washington, was not a supporter of Trump at first. She worked for the Ted Cruz campaign in 2016.

In 2016, Stroughter said she voted for President Trump but before doing so, she was a “pretty staunch Never Trumper,” a term stemming from a group of Republicans who tried to prevent Trump from receiving the Republican Party nomination, but failed.

Stroughter is the co-founder of a blog site called African-American Conservatives (AACONS) and is a mother of three. She is also on the advisory board of Black Voices for Trump.

“He won me over with the fact that he kept his promises. He made a lot of promises and I was very skeptical, I think at first, but I started seeing the achievements rack up and pretty quickly became a fan,” Stroughter said.

If President Trump is reelected, Washington said she would like to see the Trump administration defund Planned Parenthood, a nonprofit organization that provides sexual healthcare services and administers safe and legal abortions. The organization often faces heat from the Republican Party for their support in women having the right to choose whether or not they want to have an abortion.

In 2019, the Trump administration made changes to Title X, a federal grant program to help low-income families receive reproductive health services. This change, which would prohibit Title X health care providers from referring patients for abortion services, caused Planned Parenthood to back out of the program and lose funding.

Both Washington and Stroughter are staunch pro-life supporters. Stroughter said she wants to see President Trump in the White House for another four years because he is pro-life like she is, in addition to other reasons.

Trump for the next four years

If President Trump is reelected, which may not be decided for days or even weeks due to the large amount of mail-in ballots, Washington and Stroughter both said they would like the Trump administration to tackle immigration.

“I know that there are a number of things that have been proposed but I want to see the border wall completed,” Washington said. “I want to see a deal with Mexico.”

For Eric Carter, a 48-year-old United States Marine Corps veteran from Alabama, his main concern is for the Trump administration to control COVID-19, a virus that has killed over 230,000 Americans. As of Saturday, Carter had planned to vote in-person at his local voting site on Election Day. He said he had plans to take his mask and hand sanitizer.

“First of all, we need to work on this COVID thing,” Carter said. “For our nation.”

Once COVID-19 is handled, Carter said he hopes Trump will work on trying to fix the economy.

Carter voted for Trump in 2016, too. Reflecting back to that time, Carter said Trump was “charismatic” and a supporter of veterans, which was important to Carter who served four years in the Marines.

Carter, who was once a Democrat, said he was lied to by the Democratic Party which made him want to change parties. Trump, Carter said, doesn’t look at Black people as a statistic or a victim.

From Democrat to Republican

Scherie Murray, a Jamaican-born New Yorker, said she became a Republican while in college after learning about the Republican Party’s principles and history. Murray recalled the time when she had to read an American history book for one of her college classes.

“I was fascinated and learned about the perceptions of both political parties,” Murray said.

Stroughter, too, was a Democrat who changed political parties after going to college.

Washington said she became a Republican 20 years ago. Her first vote ever was for Bill Clinton when he was running for his second term in 1996.

Murray, 39, announced her bid against Rep. Alexandria Ocasio-Cortez (D-N.Y.) in 2019 but suspended her campaign ahead of the primary in May of this year. When asked if she would consider running again, she said “if the opportunity presents itself” but then said she couldn’t say either way.

Murray, along with many other Black Republicans, said she is tired of being judged, ridiculed and “canceled” for not automatically voting for a Democrat.

“I wish that people would be more receptive in why we support our president versus wanting to cancel us and demean us and call us names,” Murray said. “Because we don’t support the Democratic ideology.”

Murray voted for Obama in 2012 and said she was disappointed that he did not create any policies to help African-Americans. She said President Trump has helped the African-American community more than any other president.

“And that’s just not true.”