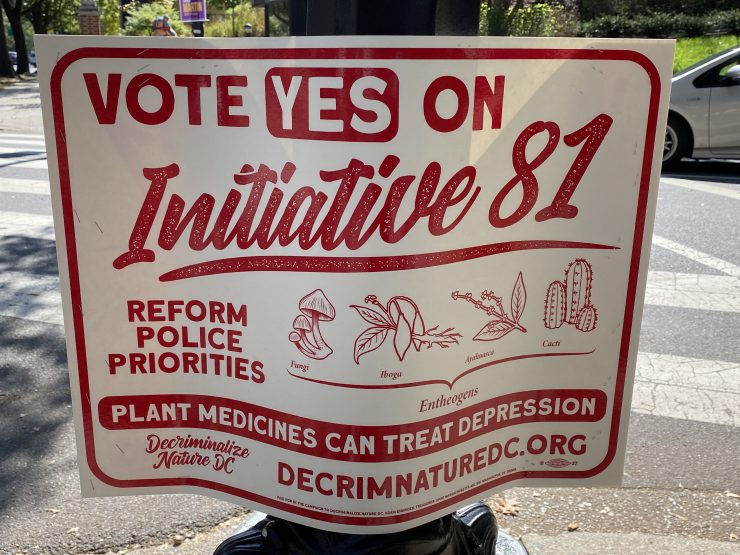 Initiative 81 passed in D.C., giving residents access to natural, psychedelic therapies as a form of treatment. Research continues within the nation to uncover the mysteries of naturally occurring entheogens.

In a 2014 Johns Hopkins study, 80% of long time smokers who had tried and failed to quit their nicotine addiction prior to the study had success after taking a controlled dosage of psilocybin, the psychedelic component of naturally occurring entheogens.

In another study conducted in 2016 by New York University and Johns Hopkins, researchers found that more than 80% of cancer patients showed massive reductions in their anxiety and depression after taking a psychedelic compound — a shift that continued beyond six months after the study was conducted. Many of the patients reported also having mystical experiences which brought them a sense of centeredness or internalized peace after their “trip” was over.

Each of the four entheogens will still be considered illegal under federal law and in many other states across the nation.

Decriminalize Nature D.C. is the campaign organization spearheading the initiative, also known as the “Entheogenic Plant and Fungus Policy Act of 2020.” The group says on their website that the change has the capability to help many suffering from a variety of mental illnesses who would benefit from psychedelics but until now have not had access to the natural substance.

This is not the first time that D.C. has decriminalized a naturally occurring substance. In 2015, the District decriminalized the possession of small amounts of marijuana for adults age 21 and older.

A portion of the initiative’s body states that the Metropolitan Police Department will now make non-commercial growing, purchasing, transportation and distribution of entheogenic plants and fungi among its lowest priorities for arrests.

While it may be illegal in most of the United States, there are several other countries that have varying levels of legalization: Brazil, British Virgin Islands, Jamaica, the Netherlands, Austria, Canada, Costa Rica, Czech Republic, Italy, Mexico, Portugal and Spain.

MycoMeditations is a psychedelics retreat center in Jamaica which offers visitors the opportunity to receive psychedelics in a controlled, vacation-like setting along the shoreline.

Retreat business director Mike Ljubsa said his experiences with psychedelics transformed his mental health to the extent that he no longer suffers from depression.

“It’s been a tool that’s helped me overcome a lot of things,” Ljubsa said. “It’s all been through a lot of mushroom use and a few LSD experiences.”

Ljubsa said mushrooms have always been a part of human existence and he believes they have the capability to heal a lot of individuals at many different levels of human experience.

As American mycologist and author Paul Stamets wrote in his book Mycelium Running, “Mushrooms are bringing us a message from nature.”

Adam Eidinger is an alumni member of American University and the treasurer for Decriminalize Nature D.C. He said to not decriminalize the plants would not only be counter-intuitive but would also negatively impact locals within the District.

“They’re growing wild in Rock Creek Park, in people’s front lawns and backyards. They’re all over the place. There are numerous psychedelic mushrooms that grow wild here,” Eidinger said.

Eidinger said there are local, natural medicine healers and shamans who usually administer natural treatments that utilize naturally occurring entheogens, but because of D.C.’s restrictions, they have had to go elsewhere to conduct their business.

“Why should they have to travel to New York or to Mexico?” Eidinger said. “There are shamans that will come to D.C. and if they know that things are tolerated here to some extent then they could have a ceremony with ayahuasca, for example, here.”

Matthew Johnson, Ph.D., is a professor of psychiatry and behavioral science at John Hopkins University. In the book How to Change Your Mind, Johnson called psychedelics a biological reboot.

“Psychedelics can be used to change all kinds of behaviors, not just addiction. It can ‘dope-slap’ people out of their story,” Johnson wrote.

DoubleBlind magazine, a weekly online and biannual print publication that focuses on psychedelics, publishes educational information for those who don’t know much about entheogens and their health benefits and also offers online workshops like their Double Blind 101: How to Grow Mushrooms and Double Blind 101: Using Psychedelics for Growth.

DoubleBlind editor-in-chief Shelby Hartman, veteran “tripper,” said entheogen treatment can open up many internalized doors for an individual who’s trying psychedelic treatment and that there’s more to entheogens than what meets the eye.

“You have to be in a place psychologically, emotionally, where you want to have this experience, so if and when things get challenging you are prepared for it and able to move through it rather than resisting it,” Hartman said.

She added that while there is research being done on some entheogens to manipulate how an individual undergoing treatment will experience it, “for now, the trip is part of the deal.”

After election results are certified by the D.C. Board of Elections, the initiative will be formally passed along to Congress. Since Washington, D.C. is not a state, the legislation will be subject to congressional approval. If approved by Congress within 30, Initiative 81 will be implemented and published as law for the District.