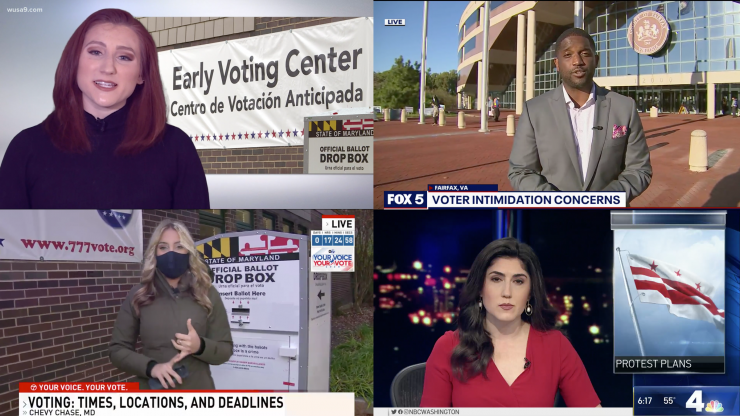 DC news outlets adapt as they gear up for ‘unprecedented’ election

With so much uncertainty about election results, local news organizations emphasize patience.

Local reporters say they’re focused on educating their audiences on the upcoming election — and being honest about the information they do not have.

“This is something that’s kind of unprecedented,” NBC4 assistant news director Matt Glassman said, referring to the potential of not knowing the results soon after Election Day. “We’ve never had to deal with this.”

“We know people are coming to us to find out the information, so the best thing that we can do as a local news station is provide the context and the perspective of what’s happening,” Glassman said.

He’s not alone in stressing the need to communicate uncertainty. Local journalists are trying to explain complex voting systems across the District, Maryland and Virginia.

“I think more than ever before, people are asking questions about how, when and where to vote,” WAMU reporter and editor Martin Austermuhle said, “whereas in years past that was kind of taken for granted.”

Austermuhle said a lot of coverage rests on explaining what the new voting ecosystem looks like: “what the new rules are, what the expectations are, and kind of guessing ahead of time what voters are going to need to know the most or what sorts of questions they’re going to be asking and putting that information out ahead of time, so you’re not getting it after the metaphorical s— has hit the fan.”

Other journalists have stressed the need to explain key issues voters will face at the polls.

“Now is the time we really, really want to drill it into our listeners that these are things that they’re going to have to think about, and we want to provide them with the best information possible so that they can make the appropriate decisions that they feel are,” said Alicia Abelson, the evening broadcast producer at WTOP.

Ryals says he is trying to finish his stories about the election by the time people decide who to vote for.

“A lot of people have already voted, so it has heightened my sense for how quickly I need to get these stories out,” Ryals said.

The pandemic, too, is changing on-the-ground reporting realities for reporters.

Austermuhle, the WAMU reporter, said that one thing to remember is that “if you approach a polling place and see that there’s a really long line, it doesn’t necessarily mean that something went wrong.” Austermuhle said, “It could literally [be] that voters are standing six feet away from each other and only certain numbers of voters can be in the polling place at any one time.

“And obviously, when you’re talking to voters, just respect their space.”

TV reporters have to be “more creative and more strategic” when talking to sources, socially distancing and wearing a mask, said Jonathan Franklin, a digital multimedia journalist at WUSA9.

“It’s a little bit difficult” to get all of the elements of television stories, Franklin said. “You’re having to rely more heavily on sources or past reporting to get the specific answers that you need to make your story.”

Franklin said that WUSA9 would rely on the Associated Press and CBS network to call many national races.

Note: Glassman is also an adjunct professor at American University, and WAMU is licensed by AU. Graduate journalism students at AU’s School of Communication publish The Wash.