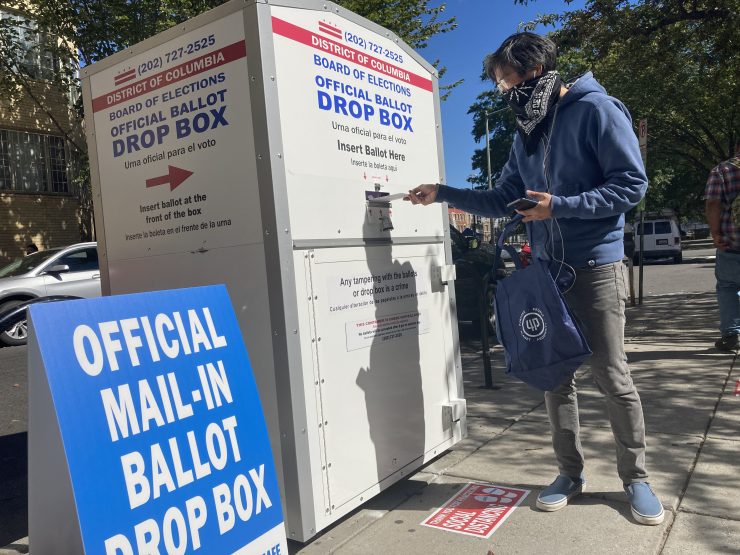 Experts call militia activity and voter intimidation greater threats this year. They want to reassure voters their votes will count.

Concerned about militia activity and political polarization, international and nonprofit organizations are monitoring Tuesday’s elections in what they call an effort to restore voter confidence in the outcome.

At the same time, officials in the Washington, D.C., metropolitan area have issued statements reassuring their voters that they will be safeguarded from voter intimidation.

The efforts follow Trump’s encouragement in the first presidential debate in September that his supporters observe the election as independent “poll watchers.”

Nothing major in the metropolitan area has happened yet, although there was a demonstration outside a Fairfax, Va., polling place in September.

But officials are on the lookout.

“Up to this point, the Office of the Attorney General has not received complaints alleging such unlawful activity — but we will remain vigilant until every District resident has their chance to cast a ballot,” said a spokesperson for the attorney general’s office for the District of Columbia in an email.

Experts say there is reason for their worries.

Jennifer Safstrom, counsel for the Institute for Constitutional Advocacy and Protection at Georgetown University Law Center, said that voter suppression is of “paramount concern in this election.” She says citizens should be prepared to confront intimidation before going to vote and know where to find help.

“Be informed about what constitutes intimidation and what you should be documenting if you see it,” Safstrom said in a phone call. “Have a plan of action so you’re not figuring out how to respond in that moment.”

Citing a decrease in public confidence in elections and increased polarization across the nation, the Carter Center has launched a public information campaign ahead of Election Day.  The center, launched by Former President Jimmy Carter in 1982, has monitored elections in 39 elections to date, but has never observed an American election.

Carter Center CEO Paige Alexander has said that the U.S. has long fallen short of international election standards, but obstacles to voting faced by minority groups and other factors make this year’s elections particularly “worrying.”

“The public is more concerned than ever before about whether results can be trusted and whether the process can be rigged,” said David Carroll, director of the Democracy Program at the Carter Center.

“That’s partly because political polarization is on the rise, and there is more misinformation and disinformation out there, which confuses voters and undermines their trust in the U.S. election process.”

The center’s campaign, which features animated videos and fact sheets, seeks to increase transparency between election officials and American voters. Carroll has observed 100 elections worldwide. He said the organization has learned that “one way to help ensure good elections is to increase public knowledge of electoral processes.”

International groups to monitor, too.

Outsiders are coming to observe, as well.

The Organization for Security and Cooperation in Europe, of which the U.S. is a member, is sending delegations of its Office for Democratic Institutions and Human Rights to monitor the upcoming elections for the ninth time. The human rights group is a non-partisan institution that observes elections in member states.

Spokesperson Katya Andrusz said that analysts will conduct a series of meetings with election officials and campaign spokespeople, and observe voting in several states before releasing findings and recommendations about two months after the election. So far, she said that new voting technologies, voter disenfranchisement, and voter suppression have been major topics in the conversations.

“Unfortunately, political polarization and political division is a challenge that we see in many countries” they follow, Andrusz said. “It often comes with an increase in hate speech and intolerance that has sometimes been amplified by political leaders,” which violates commitments made by member states.

“It’s the only election where the incumbent was raising questions about the legitimacy of the relations before the election has taken place,” Perry said. “It’s not unusual for contestants to question the results, but for the incumbent to raise such concerns is something that, as observers, we take seriously. It’s certainly unusual in that way.”

The two institutions will hold a joint press conference on Nov. 4, and hope to release their findings within two months of the release of the election results.