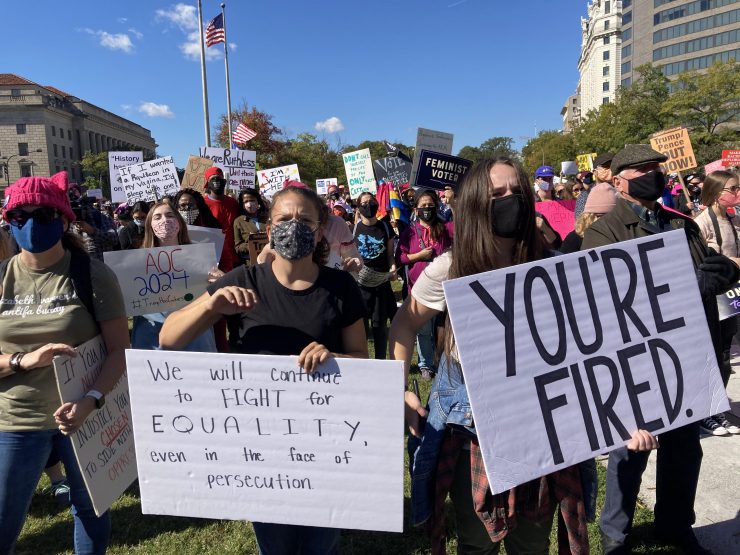 Thousands of demonstrators gathered in D.C. Saturday at the Women’s March to protest President Trump’s Supreme Court nominee, Amy Coney Barrett, and to show their support for Vice President Biden, women’s rights and to honor the late Ruth Bader Ginsburg. The Wash spoke to five of the people there.

Thousands of people came to march Saturday in Washington, D.C., to protest President Trump’s Supreme Court pick, Amy Coney Barrett, and to encourage those who can to vote on Nov. 3.

Women, men and young children wore masks as they marched together from Freedom Plaza to the National Mall. Protesters were seen shouting “Black Lives Matter” and “Vote Him Out” as they walked past the Trump Hotel on Pennsylvania Avenue.

After the passing of Supreme Court Justice Ruth Bader Ginsburg on Sept. 18, supporters of the late justice began to organize rallies and marches across the country in response to President Trump and Republicans moving quickly to replace her.

Jasmine Clemons, an advocate and volunteer for the Planned Parenthood Action Fund took the stage before the march to share her personal story about her abortion experience.

“I am proud of my abortion…with everything in me, I know that my decision was the right choice for me,” Clemons said.

The Wash talked to five marchers about their reasons for participating in the Women’s March. Some wanted to support women’s rights. Others marched to protest Barrett’s confirmation to replace Ginsburg.

Dori Tomlin said she cried when Ginsburg passed away. Tomlin said she’s afraid if Barrett is confirmed to a seat on the Supreme Court Roe v. Wade, a 1973 landmark decision that protects a woman’s right to choose to have an abortion, could be overturned.

“I’m not really sure what she’s going to do. She has written her opinions on things and she’s also said in this process that she’s not here with an agenda,” Tomlin said about Barrett.

Vice President Biden has been urged by Republicans and reporters to reveal if he would “pack the court,” by adding more justices to the Supreme Court if he wins the election. Biden’s move will depend on how quickly Barrett’s nomination is rushed, a position he signaled at last week’s ABC News town hall.

Denise Martzall, a protester from Pennsylvania who attended the march, said she supports legislators packing the court. Martzall said Republicans became hypocrites after not voting on President Obama’s nominee, Merrick Garland, back in 2016 because it was an election year, but trying to rush Barrett’s confirmation now before the current general election.

“It feels like the rules of the game are changing and I feel like we can’t play fairly if they change the rules,” Martzall said. “Pack the court.”

Next week, the Senate will hold its first vote to confirm Barrett, a judge on the U.S. Court of Appeals for the 7th Circuit. She has been praised by conservatives while many liberals question her ability to judge based on the law and not her conservative views.

On day three of Barrett’s committee hearing, Sen. Chris Coons, D-Del., told Barrett that he would vote against her.

“I’m concerned, in fact, that you will take the court in a very different direction and so with all due respect, I will be voting against your confirmation,” Coons said during the hearing.

Nathan Sullivan and his friend John Bracken decided to attend the Women’s March to support women and women’s rights. Sullivan said Barrett is qualified and competent but he doesn’t think she is a good fit for the Supreme Court.

“I think that she is probably not fit for the Supreme Court because she is clearly very biased in one direction,” Sullivan said.

“Whether or not we believe abortion is right or wrong, it really shouldn’t be up to our government to decide that. It should be up to an individual woman and her own beliefs about what is right for her own body,” Sullivan said.

Brackens said women are some of the biggest supporters of the LGBTQI+ movement. He wanted to return the favor by showing his support by marching.

“As a gay man that is so important.,” Bracken said. “Allies support allies.”

Christina Johnson, who flew to D.C. from Los Angeles, strategically planned her trip so she would have time to attend the Women’s March. Like Sullivan, Johnson said Barrett is “100% not fit” to be the next Supreme Court justice.

“She’s not fit to be a judge on any court let alone the highest court,” Johnson said.

Johnson said replacing Ginsburg two weeks before the election was the wrong move. When she returns to California tomorrow, she plans on working with her community to educate people about voting this election cycle.

Some protesters dressed in costumes from The Handmaid’s Tale — the popular Hulu series known for its controversial themes focusing on the use of women’s bodies as objects and gender roles in a totalitarian society. The red outfit symbolizes fertility, a central element in the series.

The march ended on the National Mall where a “text-banking telethon” began. The goal, according to the Women’s March website was to contact over 100,000 voters through text-messaging to encourage people to vote.

The Senate will most likely confirm Barrett, as Majority Leader Mitch McConnell (R-Ky.) said Republicans have the votes to secure her nomination.