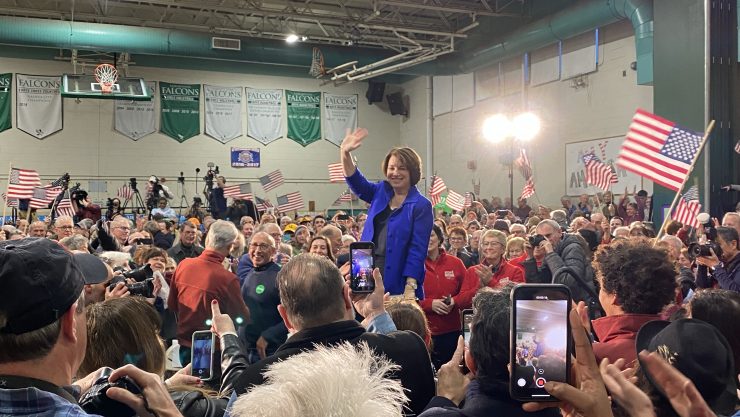 Undecided voters weigh their options with Amy Klobuchar in Nashua

NASHUA, N.H. — A year ago presidential candidate Sen. Amy Klobuchar announced her 2020 presidential run outside in the midst of a snowstorm in Minnesota. The scene was similar Sunday night at a campaign event.

The excitement was palpable in the line that wrapped around Fair Grounds Middle School as more than 1,000 Klobuchar supporters waited to meet the “Minnesota Nice” senator.

Despite reports of Klobuchar’s mistreatment of staff, she has retained moderate popularity and appears to be gaining steam in New Hampshire after a $3 million fundraising haul and a strong debate performance on Friday night.

Many voters at the rally on Sunday said they were undecided and wanted to see Klobuchar to make a more informed decision. One was Bev Boyer, a New Hampshire professor. She came to the rally because she has tried to see every Democratic candidate in person at similar events and had not seen Klobuchar before.

“Believe it or not, I’m still undecided. The fact is, of all the people I’ve seen, I’ve liked them, many of them, very much. I think it’s an amazing roster of people, and I wish they could all join together and work together for our government. It’s been an impressive and inspiring group,” Boyer said.

Boyer added that her “personal politics” might lead her to support a candidate such as the frontrunner, Sen. Bernie Sanders. But she worries that he is too far left for much of the party, which is why she may switch to supporting Klobuchar.

Robert Bauer, a Nashua teacher, also wanted to see the Minnesota senator in person to make a decision by Tuesday. He said that Klobuchar is his first choice because “[It’s] not necessarily specific issues as much as a comprehensive, overall piece. I’m impressed with her ability to articulate the issues, to differentiate yourself from other candidates, her sense of humor, and her personal touches as well,” he said.

Not everyone at the event was there to see Klobuchar, however. Dale Coye, another New Hampshire professor, considers himself an independent but said he is planning on registering as a Republican and voting for Bill Weld.

“Because I would like to get Trump off the ballot completely,” he said. “He’s such a madman, he’s gotta get out of there. And Weld is a very qualified candidate. So I’m hoping he registers really well in New Hampshire and sends a jolt through the nation, saying ‘We don’t have to vote for Trump, here’s an alternative,’” Coye said.