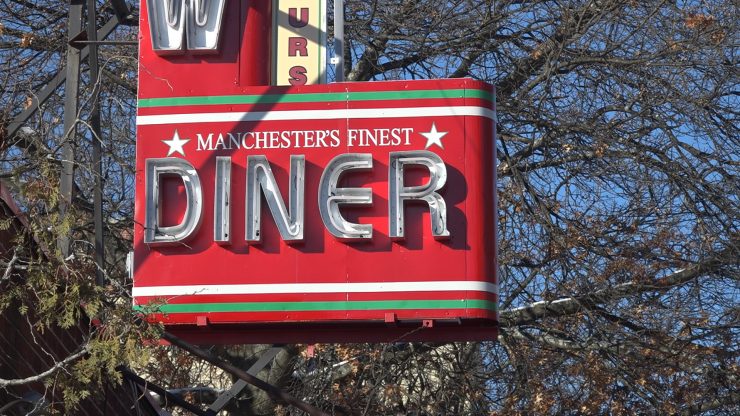 American University students have been interviewing voters and would-be voters in the last four days leading up to the election in the nation’s first primary.

MANCHESTER, N.H. — Proudly displaying his perfectly crisp bacon on a frigid day inside the famous Red Arrow Diner here, John Hikel shared his thoughts on everything from his support of President Trump to golf to his views about New Hampshire’s role in the U.S. political process.

The diner itself is known for attracting everyone from local breakfast patrons to presidential hopefuls looking to cozy up to political tourists masquerading as in-state voters. Hikel falls into the first category. Hikel, a former Republican state representative from Goffstown who used to own an auto-body repair shop, said he is firmly behind President Trump and his agenda.

“My president is covering all of those issues that are important,” he said. Hikel now wants Trump to focus on fending off attacks from his opponents and getting himself reelected in November.

A longtime registered Republican, Hikel said his primary loyalties belong to the president, not the party. “I’m definitely a Trump voter first,” he said.

Hikel, who is planning to attend the Trump campaign’s rally at the SNHU Arena on Monday night, said that while he is proud of the president, he likes how politics in New Hampshire are still conducive to productive and civil dialogue between people who may disagree with each other.

“I like the idea that all of us are engaged in a political process without fighting, without wars, without guns coming out like other countries,” he said. “We have a right to sit here and be next to people who may or may not have the same political philosophy as us, but we don’t turn it into a battle.”

William McGourty, 62, lives a block away from the Red Arrow Diner in Manchester, which has long been a hub for New Hampshire primary politics.

McGourty said he feels overwhelmed by the chaos surrounding this year’s primary and hasn’t yet identified a candidate he supports. As a former Air Force Service Member, McGourty says global issues are the most important to him.

He said he would like to see a commander-in-chief with “more of a gritty side to them” and believes democratic primary candidates like Elizabeth Warren are too “academic.”

Retired police detective Howard Wooldridge sat at the old-fashioned Red Arrow Diner on a sleepy Saturday morning — a typical scene, apart from his T-shirt, which read “Cops Say Legalize Heroin. Ask Me Why.”

Wooldridge, who sees heroin as a public-health issue rather than a criminal one, is on the board of directors of an organization called Citizens Opposing Prohibition (COP), which lobbies to legalize all drugs, including heroin. Sporting his trademark 10-gallon hat, the “cowboy cop” drove eight hours from his home in Washington, D.C., to prod candidates to elevate his cause in the days before the primary election.

“Across the USA today, 10 teenagers will be shot and killed selling drugs off sidewalks. Not beer, not whiskey, but things from marijuana to heroin,” Wooldridge said. “This is a slaughter no politician, Democrat or Republican, wants to talk about.”

“As a retired cop, in order to protect and serve my community, we need to end this war on drugs, modern-day prohibition, and let cops get back to public safety,” he said.