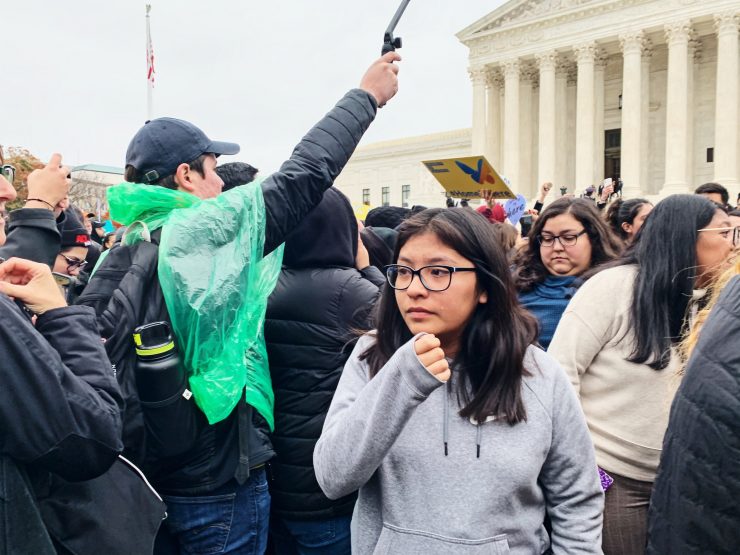 As the Supreme Court met to discuss the future of DACA, hundreds of protestors gathered to send a message: regardless of the legal decision, they are here to stay.

“Is it snowing? Is it raining? Does it matter?” shouted Winnie Stachelberg, executive vice president of the Center for American Progress, to a crowd of protestors surrounding the steps of the Supreme Court.

The DACA program was created to temporarily stop the deportation of children and their parents who had come to the U.S. and met a number of guidelines described by the United States Citizenship and Immigration Services.

But on Sept. 5, 2017, the Trump administration announced it would be rescinding the program and would no longer accept new applications.

As the controversial case began to debate if Trump’s policy was lawful, protestors set the stage outside with speeches, musical performances and chants like “here is home.”

Some political figures were among those at the rally, like Sens. Dick Durbin, D-Ill., and Bob Menedez, D-N.J., as well as Congressman Julian Castro, D-Texas.

Patrice Lawerence was one of many to speak on the frustration she felt during the rally.

“We are very ambivalent to be here. Who has cried in the last week? Who has been frustrated as hell for the past two years?” Lawerence asked.

She wasn’t alone in her frustration, American Federation of Teachers President Randi Weingarten addressed the protestors with a question, “Are you ready to fight?”

“Immigration is the heartbeat of America, we have to get back to that place. We will make sure DACA recipients are not just nameless or faceless,” Weingarten said.

Others in attendance hoped to call to action those in black communities to stand in solidarity with DACA recipients, and remember the issue is multicultural.

Derrick Johnson, president of the National Association for the Advancement of Colored People, and one of the plaintiffs in the hearing, reminded those in attendance that they deserved the promise made by the Obama-era policy.

“Just like the Dred Scott decision that told black folks that you had no rights for white folks to uphold, we stand here to say that was a lie then, that is a lie today,” Johnson said.

Although the protestors joined hands and sang the lyrics, “we gon’ be alright,” some were bracing for a possible decision in favor of the Trump administration.

College student Markia Brungs said she had studied the past court decisions and political stances of the Supreme Court Justices, and she wasn’t sure what would happen.

“I think it will be a close decision if they were to rule against Trump, too close to feel like we can relax, but I do think it means something that we are coming out and standing up regardless of the odds,” Brungs said.

Others echoed Brungs’ weariness, but were more hopeful for a win.

Karen Cid Ibanez came from California to attend the hearing and camped outside for two days in anticipation. Cid Ibanez was one of the first in the line to get into the hearing and said what she heard from judges was not all positive news.

Liz, a student in D.C. who withheld her last name because the Supreme Court’s decision will directly affect her, said she has lived in the U.S. for 13 years and, whatever may come, she is standing strong.

“I’m feeling hopeful, I hope that being out here and standing together, raising our voices, means something,” Liz said.

Judges will deliberate to decide if the program can be rescinded. The decision is based on two questions: is the decision by the Trump Administration reviewable by the Supreme Court, and was the choice to rescind lawful?

The decision regarding DACA should come sometime next summer, according to a post by the Supreme Court Blog.