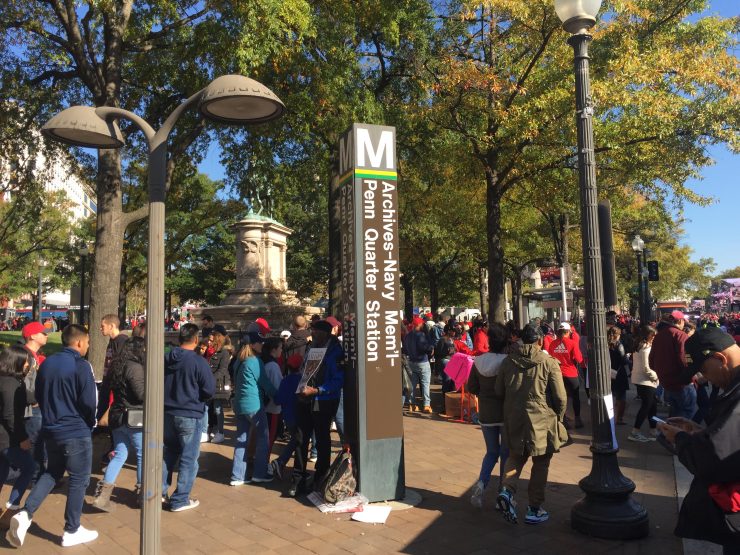 At Saturday’s Washington Nationals victory parade, over 500,000 people rode the Metro, according to the official WMATA twitter account.

Tens of thousands of people congregated on Constitution Avenue Saturday to celebrate both the heart-stopping victory and triumphant return of the Washington Nationals—and District Transportation Services held their own against the tide of pedestrians who crammed the Metro and flooded the streets.

The 2019 World Series Champions  paraded before throngs of exuberant fans that culminated in a rally that captured the view of the Capitol building in the background. Massive jumbotrons were posted all along the street in anticipation of the massive crowd which would allow people who weren’t close to the stage to see what was happening.

In anticipation of this, the District Department of Transportation and Washington Metropolitan Area Transit Authority, or DDOT and WMATA, had to move quickly. With the Nationals winning the World Series on a Wednesday and the turnaround for a parade to be scheduled that Saturday, those three days were crucial for ensuring the parade’s success, and they rolled out several plans to help deal with the strain the large crowd would put on city transportation services.

On Friday, Mayor Bowser held a press conference with many of the officials that would be in charge of planning the parade and spoke about several services and information keys that would be set up for the parade. A website and a texting service were used to send out key information about the parade, transit, and weather.

DDOT Director Jeff Marootian, told reporters the creation of a  “pedestrian-only zone” was going to be key for safety processes. Cars, scooters, and bikes weren’t allowed within the zone. For people who used them, bike corrals were established all around the zone, and areas used for picking up and dropping off people who used services such as Uber and Lyft were also established along Independence Avenue SW.

All around and along the parade route, roads were closed, which encouraged people to take the MetroIn order to compensate, the Metro ran an all-day rush hour schedule Saturday and pushed any already scheduled work on the track back.

This isn’t the District’s first time around with a victory parade, either. Last June, the Washington Capitals had their own celebration after winning their first Stanley Cup championship in franchise history. The day after, WMATA tweeted that after final ridership estimates, over 840,000 people rode the Metro.

While the ridership at the Nationals victory parade wasn’t as high, the effects of the large crowd still did cause some strain during the festivities. An alert sent out through the text service, set up by the Mayor’s office, alerted users to a station closure.

“ALERT DC: WMATA advises Archives Station entrance remains closed due to overcrowding,” read the message a little bit before 3 PM, an hour after the parade started. About a half hour later, another alert was sent out saying that the station was now open for “exit only.”

Archives Metro: Due to parade crowds, the station is currently in “exit only” configuration. Use Gallery Place or L’Enfant Plaza instead. #wmata #NatsParade

Eventgoers, while acknowledging that the experience of riding the cramped Metro was unpleasant, still understood the challenge that came with planning for it.

Oliver Massa, who rode the Metro during rush hour to get to the parade, said that the experience “sucked,” but still recognized the difficulty and praised them for their efforts.

“I think they did as good as they could,” Massa said.

People replied to the WMATA tweet revealing ridership and some praised the Metro for its service throughout the day.

What a turnout for the @Nationals #WorldSeriesParade! Yesterday's preliminary Metrorail ridership is 504,172 trips. For comparison, last Saturday was 167K lower (337K total), so parade/rally increased ridership by 50%. Extra trains sponsored by #Xfinity made it possible! #wmata

“You took a lotta crap from the ridership metro, but you excelled like the @Nationals this October. #FIGHTFINISHED” wrote one user.