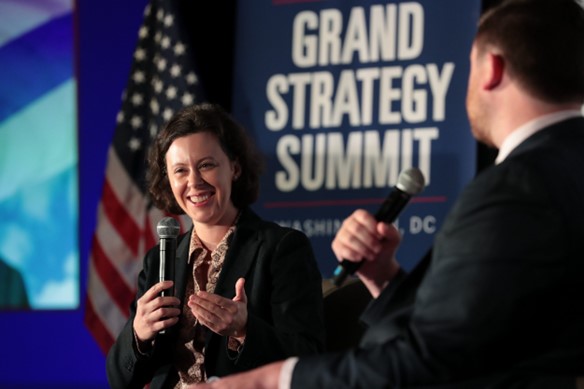 Speakers discussed the United States’ role as a global power at a session of the Grand Strategy Summit.

Speakers at the Grand Strategy Summit last week shared a glimpse into a worldview that prioritizes the U.S. asserting dominance, rather than relying on diplomacy, on the world stage.

The summit was held by the Richard Nixon Foundation, and it included a session on the United States’ response to the war between Russia and Ukraine, “Cold War 2.0? Russia, Ukraine and the Western World.”

Among the speakers at the session, policy advisor and former board member for the Wall Street Journal Mary Kissel shared what she said may sound like a “harsh” perspective on U.S.-Russian relations.

“We have lost our ability to be ruthless about these things,” Kissel said. “But these are ruthless men.”

Regarding Russian President Vladimir Putin, Kissel said, “We should be flooded right now, with information, and photographs and videos about all of [Putin’s] properties around the world. And the lavish lifestyle. We should be saying and posting: ‘This is where the kids are. This is where the ministers are. Here’s where the votes are. And, if you use a tactical nuclear weapon, not only will we nuke you, but we will also go after all of these other things that you value.’”

Garry Kasparov, a Russian chess grandmaster and political commentator, said that the approach to the current state of affairs is all about “strategy.”

“If you have strategy, you can choose your tactical tools,” Kasparov said. “But if you have no strategy, you are to react, not correct. And I think the biggest problem now is at the end of the Cold War, America lost its strategic vision.”

Kasparov said that the United States was “the leader and defender of the free world,” and that “every moment America shows weakness, [the U.S.’s rivals] capitalize on it.”

Scottish American historian Niall Ferguson took issue with the current administration’s handling of foreign policy over the past few years, calling it “the Carter administration with dementia.”

Ferguson said that the Biden administration “completely bungled its Middle Eastern policy, failed to deter Putin last year, [and] made a complete mess of the abandonment of Afghanistan” and that the United States should “avoid a showdown at this point of weakness” in the current Biden administration.