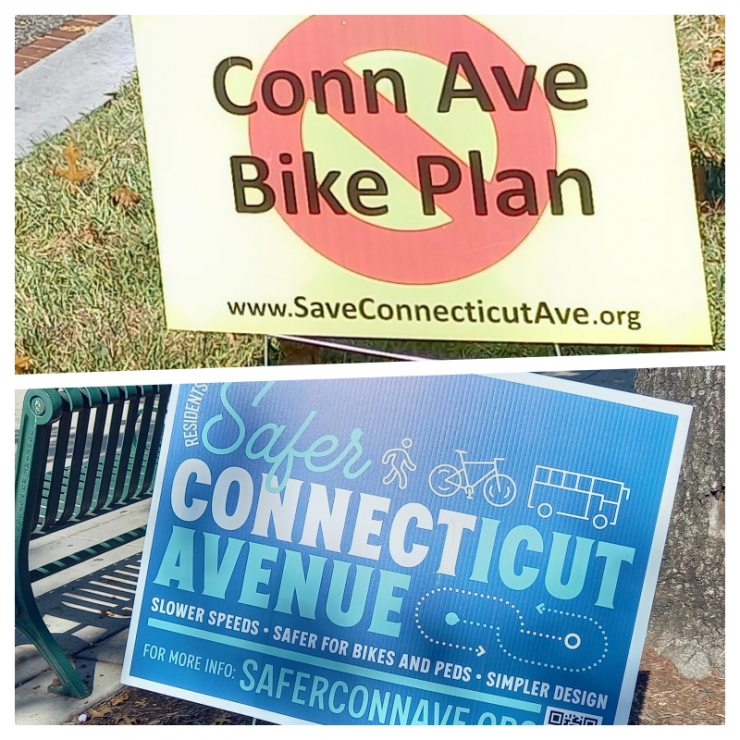 Residents along the major corridor connecting downtown D.C. and Maryland are divided over the plan to build protected bike lanes.

Proposed bike lanes have divided residents and businesses along upper Connecticut Avenue in Northwest, with advocates on both sides of the debate citing safety among their concerns.

The debate has found its way into the fall campaign, with candidates for the D.C. Council and advisory neighborhood commissions staking out a side.

SaveConnecticutAve.org started an online petition calling for cancellation of the bike lanes about a month ago. It has collected about 1,550 signatures as of Oct.11.

“It was estimated that eliminating the reversible lanes would decrease crashes there by about 17 percent. The addition of protected bicycle lanes also helps to reduce the speed of vehicular traffic, reducing crash severity and making the area safer for pedestrians,” said DDOT in a statement issued at the time of announcement.

The new design applies to a 2.7-mile strip from Calvert Street to Legation Street on the avenue, where the reversible lanes used to run before the pandemic. DDOT will consider the extension of the project from Legation Street up to Chevy Chase Circle over this winter.

Lee Mayer, one of the organizers of SaveConnecticutAve.org, pointed out that the new plan poses a public safety issue.

“One of the remaining two lanes [on each direction] will be taken up by busses and delivery vehicles and there will be a gridlock. Emergency responders won’t be able to respond to a call in a timely manner and people’s lives are at stake.”

Mayer was also concerned about the safety and inconvenience of older and disabled citizens, who would have to cross the bike lanes to get on buses or have to walk longer distances to be picked up by ride share services.

“The city is trying to be green because everybody is in favor of it. But we have to do it in a responsible, caring manners that all residents benefit from this plan,” said Mayer.

Rosenman had worked with local small businesses for decades and had seen how their revenues were affected when parking spaces were removed from their storefronts. Rosenman said he knew of one shop owner along the avenue who decided not to renew a lease contract because he was upset about the bike lane plan.

Rosenman said small businesses defined the neighborhood character. “The current plan is detrimental for the character and quality of life in our neighborhood. It frustrates me that it is in denial of these facts.”

These voices have been heard by a candidate for a City Council seat in the November election. David Krucoff, a Republican running for Ward 3 who was recently endorsed by the Washington Post, is against the protected bike lanes on the avenue.

“Concept C on the Connecticut Avenue is a bad idea. Everybody else knows that is a bad idea. I am the only one that has the guts to say something about it,” Krucoff said. “Bike lanes hurt commerce. We have a dynamic economy, and bike lanes are not the answer. If you want to talk about a policy, you should be talking about making buses sexier.”

Matthew Frumin, a Democrat candidate for Ward 3, supports the Concept C, while he stresses the needs to balance all the different interests of residents and small businesses.

However, bike-lane supporters are working to ensure support for their cause.

About a hundred cyclists and candidates running for advisory neighborhood commissions (ANC) in the November election gathered at Fort Reno Park on a Sunday afternoon late September. Candidates shared their views on the bike lanes and called for support for their campaigns.

“Make the road for people who live in the area, not commuters”

Josh Rising, co-founder of Ward 3 Bicycle Advocates (W3BA) that organized the gathering, said the majority of ANC candidates support installation of the protected bike lanes. Rising said that 68% of all ANC candidates responded to a recent survey by W3BA, and 86% of those respondents said they support the current plan to install the bike lanes.

“There is a better world we can live in, which actually makes the roadway safer, and give options we don’t have now,” said Sauleh Siddiqui, a candidate for a commissioner in ANC 3C who is endorsed by W3BA. Siddiqui pointed out that Concept C is “a wonderful compromise” compared to other options DDOT considered, because it adds dedicated 24-hour pick-up/ drop-off, loading and parking zones on one side of the avenue that do not exist now.

“Dangerous roads kill more children than anything else. If traffic moves slower, that’s a good thing.”

Both sides still have time for dialog. According to the timeline provided by DDOT, concept refinement will continue until January 2023. Then, the preliminary and final design phase will run until early 2024, and actual construction starts only in late 2024.

“I am glad that now more people are finding out about it. That will make for a better design,” said Siddiqui.

“There hasn’t been a conversation yet where everybody has come to a collected table and discuss ‘these are the things we do agree on, these are where we disagree, and how we can come to a place where most us feel good about’,” said Peter Lynch, a candidate for ANC commissioner in Ward 3/4G, an area facing the extension part of the bike lanes project.

Lynch said the reason for his candidacy was to increase engagement of residents on important issues like protected bike lanes. He said that people are not as far apart as it seems. “Everybody wants a vibrant Connecticut Avenue. Everybody wants safety for bicyclists. Everyone wants this community to thrive and grow. Those are some great common points we can all start from.”

“I know people on both sides. I talk to them and they are reasonable people,” said Jerry Malitz, a former ANC commissioner and publisher of a local newsletter Chevy Chase News & Notes. “People really need to engage, they need to mobilize people, and they need to be honestly constructive, not to just say things without proof.”

Malitz personally walked along the segment of Connecticut Avenue that will be examined for extension of the protected bike lanes. He counted the legally metered parking spaces on the avenue and side streets, and he found out that 37 out of these 86 spaces would likely remain after the bike lanes are installed.

He also found that there are 364 spaces along the strip that are exclusively used by businesses but are underutilized. “People keep talking about parking, but I think there are ways to mitigate parking losses,” said Malitz.

“Not a zero-sum game”

Elissa Silverman, an at-large councilmember running for re-election, said, “bike lanes will be there.” But she also emphasized that the project is still in a design phase and citizens who have concerns about mobility or parking should participate in DDOT sessions to give their input.

“We can do this without being polarizing. I do not think it is a zero-sum game. But you can’t come to a compromise if people cannot talk,” Silverman said.