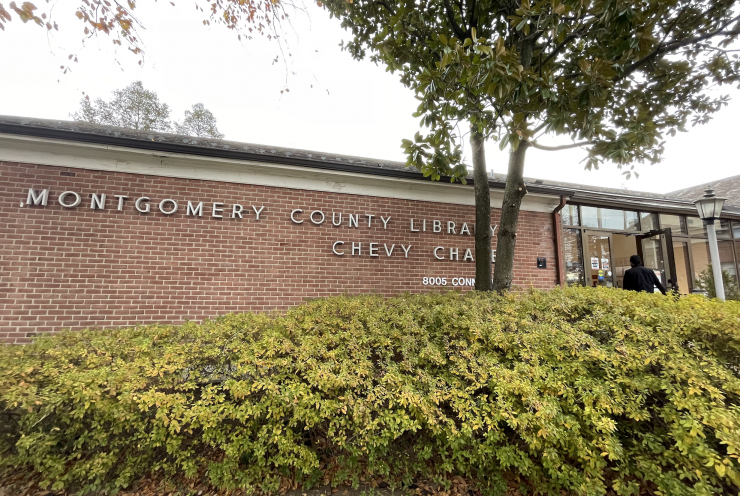 To many locals, the Chevy Chase Library is a quiet oasis where they check out books, surf the web and study for exams. But, if walls could talk, it would become evident that the building needs a facelift.

The Chevy Chase Library Building Project, part of an effort to refurbish all 21 Montgomery County Public Libraries (MCPL) by 2035, has proved to be a contentious issue among residents. Locals submitted nearly 1,500 comments on two building proposals between summer 2020 and Nov. 22, 2021.

Of these comments, 110 are available on the building project’s webpage. Public comments range from outwardly opposing plans that increase area congestion to encouraging a full-scale renovation that modernizes the library to supporting plans that bring growth to the community.

“The library definitely sees itself as a key to a good community life for all the residents in the county,” said Anita Vassallo, director of MCPL. “We want the best outcome for the library in Chevy Chase now and 10 or 20 years in the future.”

One building plan involves a full-scale renovation of the library, originally built in 1965. The other plan calls for constructing a new, larger library with attached housing.

Both plans are expected to have roughly the same price tag.

The two plans for the Chevy Chase Library, located at 8005 Connecticut Ave., are estimated to cost more than $6 million. The nine county library refurbishments completed so far have cost an average of $2.25 million. According to data provided by the Department of General Services (DGS), the Chevy Chase plans far exceed the average library project cost.

“The refreshes of the libraries were never meant to be full-scale renovations when they began back in 2015,” Vassallo said. “There are significant infrastructure problems with the building.”

Ronnie Warner, chief of the Office of Planning and Development at DGS, said the two proposed projects are estimated to take two to three years to complete — with the renovation possibly on the shorter end and the reconstruction on the longer end of the timeline. She said a typical library project takes a year to complete.

“It would take significantly longer than the other [library projects],” Warner said about the Chevy Chase project. “The refurbishment program is really meant to be new carpet, new paint and ADA improvements, so this is well beyond that.”

“If we’re looking at just the building process itself, maybe it is an extra year, but I don’t think that’s the way it’s going to turn out,” Higgins said. “It will be five years at least before we have another fully operating library,” he suspects.

The plan to reconstruct the library with attached housing would be done through a public-private partnership to help offset the costs. Under this plan, the library would expand from 16,000 square feet to 20,000 square feet, and possible plans include an early literacy area, dedicated teen area, adult reading area and collaboration rooms with smart TVs.

Both DGS and MCPL emphasized that a plan and its specifics have not yet been decided. Instead, these are preliminary ideas. When a decision is made, these agencies plan to collaborate with the community about features it hopes to see.

Locals have expressed both support and criticism for these plans. In the high-rent area, some favorably view the prospect of additional housing, which could bring more affordable options.

A Bethesda resident who uses the Chevy Chase Library said the same. “Redevelopment through a public-private partnership would be fantastic! Absolutely expand available, sub-$1M housing,” the comment said.

But many also feel strongly against the property’s redevelopment. Hillary Fennell, a Chevy Chase resident who’s used the library for 40 years, said it would be a “disgrace” to reconstruct the building, adding that she doesn’t want to see another high-rise in the area.

Higgins, a resident of Chevy Chase for 50 years, feels similarly. He sent a letter to DGS and MCPL in 2020 expressing his concerns for the redevelopment plan.

In an interview last week, Higgins told The Wash that he feels stronger about this issue today. “The idea of a public-private partnership in which there’s going to be more housing and, therefore, more traffic…is really asking for serious, serious problems,” he said.

Because the library is next to the Chevy Chase Fire Department, Higgins said his main concern draws from the traffic bottlenecks that already slow firetrucks traveling north on Connecticut Avenue.

“Traffic could be so bad that [firefighters] have to take the engine and run it up the south lane of Connecticut Avenue against the traffic because there’s no traffic coming,” he said, adding that he’s noticed an increase in traffic since the Chevy Chase Lake development began.

This project, located two blocks north of the library, will bring more housing and retail to the area, WTOP News reported earlier this year.

Others positively view the influx of people to Chevy Chase. “Living above a library really sounds like a dream,” one comment said. “Creating that opportunity only makes sense as our community continues to grow.”

Judy McGuire is a resident of Chevy Chase and the president of Friends of the Library Chevy Chase Chapter, through which she helps raise money for the library and organizes outreach events. She’s used this library since she moved to Chevy Chase more than 30 years ago — first bringing her children and now her grandchildren.

In an interview, McGuire said libraries are changing their role in society to become more community-oriented. But when the library closes for updates, locals will be forced to use other libraries.

“I think it’s a loss to the community,” McGuire said. “It sort of breaks things up,” similar to when students are sent to temporary schools while their actual school building undergoes renovation, she said.

While the county has proposed these two building plans, some residents offered other ideas regarding the future of the library.

“I would suggest that the county renovate the library and add an upper floor or two with rental apartments to serve the low to middle-income residents who work in our libraries, schools and other county agencies,” one woman wrote, combining aspects of the two plans. “Many of these workers cannot afford to live in the county anymore and must commute long distances, contributing to the heavy traffic.”

DGS and MCPL plan to meet with County Executive Marc Elrich later this month to discuss the public’s comments, although no date has been set. If Elrich is briefed this month, a plan will be added to his budget, which council members will vote on later next year.

“We’re really thrilled with the community feedback,” Warner said, adding that DGS didn’t expect to receive so many comments. “We were very pleased.”