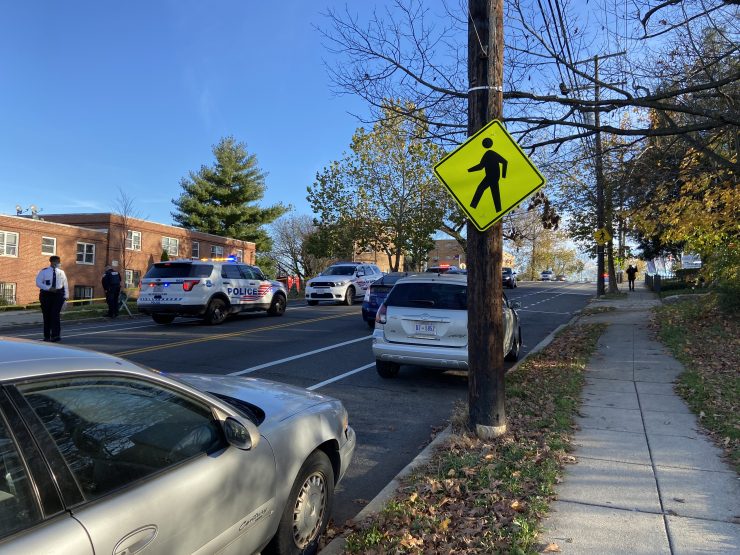 The victim, who was conscious and breathing when police arrived at the scene, was shot in the leg.

The Metropolitan Police Department (MPD) continues searching for a man that shot another male on the leg this afternoon at an apartment complex in Ridge Road, South East.

Police spokesperson, Officer Hugh Carew, told The Wash the victim was conscious and breathing when MPD arrived at the scene. Medics transported him to the hospital.

Carew said MPD received an emergency call at 1:49 p.m, but he declined to disclose the exact information relayed by a witness.

When The Wash arrived at the scene, the street was illuminated with police lights coming from the four police cars present at the scene. Police officers taped the scene and lampposts in the next block. A neighbor declined to speak with The Wash about what they saw and heard while another potential witness, a teenager, was too young to give consent for on-record comments.

The Twitter account for the MPD posted a description of the shooter, which was read by Carew in the interview conducted through the phone. The tweet described him as an adult Black male between the ages of 20-30, wearing black coat and hat and had medium length dreads. Aside from these descriptions, Carew said they had no update on the shooter.

Lieutenant L. Tyler, who was at the scene, said the victim had no “life threatening injuries.”

Tyler, who mentioned that she could not give out much information about the investigation, said that the MPD found out about the incident because neighbors heard a gunshot.

Tyler said that her officers and her had been in the scene for about an hour before The Wash arrived at the scene. Tyler was the watch commander today on the Sixth Police District; the location of the shooting belongs to this sector of the MPD.

Police officers were asking people coming into the apartment complex to identify themselves before entering. A man that arrived with two children lived in the apartment building in front of the scene of the shooting.

The illuminated police cars attracted the attention of people passing by in their cars or walking. Neighbors, walking near the scene, were curious about what happened, asking The Wash if they had knowledge to share.

From the few neighbors that were outside of their house a woman was with her daughter, who were both maskless, and another male neighbor watching the scene. The woman did not want to give any comments to The Wash and she did not let her thirteen year old daughter, either.

Another woman, who did not identify herself, said that she was delivering a turkey to a neighbor and the police cars were there when she arrived.

The Crime Scene Science Division (CSSD) was on the scene taking pictures. The officer said she was not permitted to disclose information regarding an ongoing investigation.

When the CSSD finished taking pictures and gathering evidence, the police officers removed the crime scene tape and left the scene at 3:30 p.m.

Crime in the community

Crime has gone up in the last two years in the Police Service Area (PSA) 603. According to the DC Crime Cards, assaults with a dangerous weapon, in this case, a gun, rose 17% compared to the number of crimes of this type that occurred from 2016 or 2018.

The same database showed a 19% increase in the crimes involving guns as a weapon from the beginning of this year until now, compared to that same time in 2019

Compared to this time last year, in a time period of a month, crime increased 34% according to the DC Crime Cards.