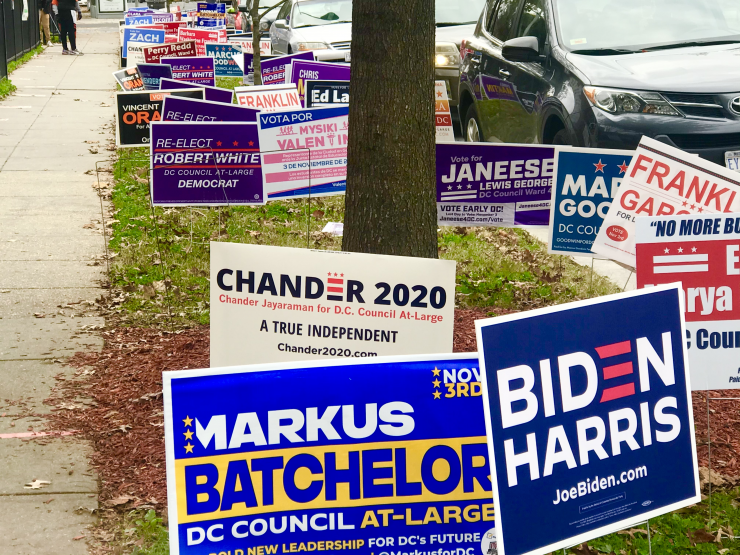 Election officials and civic leaders notice an uptick in engagement among Millennials and Gen Z voters. Young voters said Hilary Clinton’s loss in the 2016 election and the Black Lives Matter movement are just some of their motivations.

Samantha Edgerly was sure she knew how the 2016 election would end, though when her candidate Hillary Clinton lost to Donald Trump, she recalls being in disbelief that she didn’t send in her absentee ballot that year.

“In 2016, a lot of people my age, race, and gender were like ‘Hillary is going to win,’ completely convinced she was going to win,” Edgerly said.

Edgerly, a 29-year-old Petworth resident, used her disappointment over the outcome of the 2016 election as motivation to get involved during the 2020 election.

In February, she decided to volunteer virtually by making calls and sending postcards to potential voters in swing states, which she said came in handy because shortly after, COVID-19 hit.

“The campaigns started before COVID, so they didn’t involve anything about voting by mail just to vote on Nov. 3,” Edgerly said.

However, reaching out to potential voters isn’t the only way young people are getting involved in the 2020 election. In D.C., election officials say over 6,000 first-time poll workers signed up to work the polls.

Michael Bennett, Chairman of the D.C. Board of Elections, said Gen Z and especially Millennials have shown up in record numbers to volunteer this year. In fact, due to the pandemic, many young volunteers have replaced seniors who have historically worked the polls.

“I walk through training classes, and 25-40-year-olds are the largest age groups who showed up to work the polls,” Bennett said.

Bennett said a significant reason for the massive turnout in young voters and volunteers might be due to the protests this summer.

Edgerly agreed. She said social injustice such as police brutality was a reason she got more involved in this year’s election. It’s also a reason she made sure to vote this year.

“I just felt like I couldn’t do the same exact thing and expect a different outcome,” Edgerly said. “That was one side of it. The other was protesting this summer with the Black Lives Matter movement after the memorial of George Floyd.”

In this year’s election, Millennials and Gen Z voters will equal Baby Boomers, and According to a study by Pew Research Center, 64-77% of them disapprove of how President Trump is handling his job.

Maxima Molgat,18, A freshman at Georgetown University who voted for the first time this year, said with our nation’s current state, it felt good to finally have a voice.

“This country right now, in 2020, it’s become extremely divided with the pandemic, Black Lives Matter movement with everything that’s going on, we need someone to come in and unify the nation,” Molgat said.

Molgat said she was so excited to be a part of what could be a change for the United States she even recorded a video of her mailing her ballot back to her hometown and posted it on social media.

It’s still too early to tell how an increase in youth voter participation will affect the upcoming election. But Amy Cohen, executive director of diversity, equity and inclusion at George Washington University in Washington D.C., said she’s noticed an uptick in both election activism and participation.

“This year it has exploded because that’s how we’re able to reach young people that are at our university but also young people who are outside,” Cohen said.

Cohen said that organizations such as When We All Vote, Michelle Obama’s organization, the Andrew Goodman Foundation and Students Learn Students Vote have also contributed to an increase in youth voter engagement.

The GW Votes coalition’s goal is to have 65% of their students vote in the 2020 election. However, Cohen said she won’t know the numbers until after the election through reporting by the, which will have statistics by the number of voters across the country and by colleges.