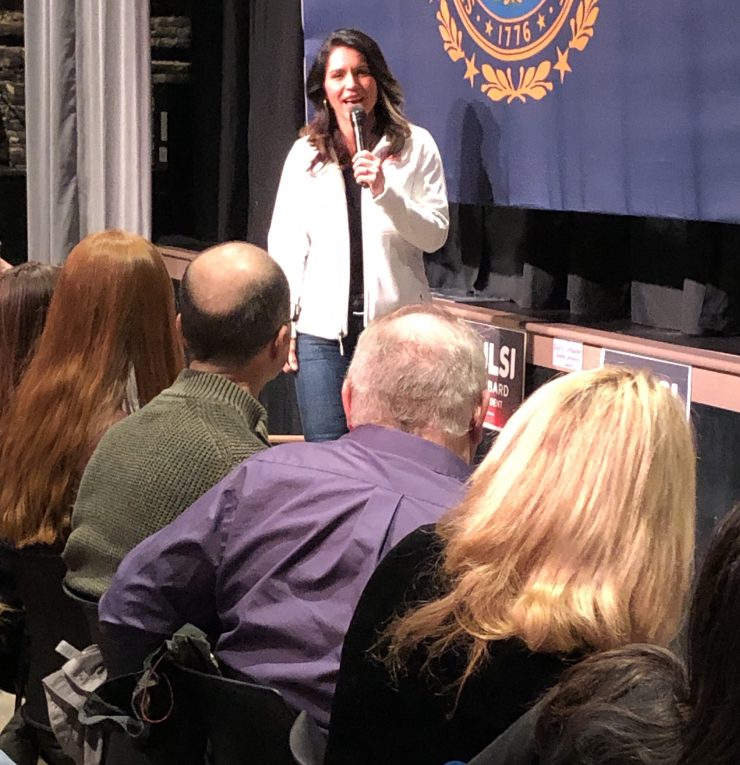 Gabbard says her experience is needed to address military issues

Manchester, N.H. — Two candidates seeking the 2020 Democratic nomination for president have unique qualifications when it comes to dealing with military issues. Rep. Tulsi Gabbard is a major in the Army National Guard and Pete Buttigieg was in the U.S. Naval Reserve and served in Afghanistan.

Gabbard, who represents Hawaii’s 2nd District, enlisted in the Hawaii National Guard in 2003, completed Officer Candidate School in 2007 and holds the rank of major. Buttigieg resigned his commission in 2017.

The next president will face myriad issues involving the military, including a suicide rate that hit a record high in 2018, when 581 active duty, reserve and National Guard personnel took their lives.

“There’s no single solution I can give you that will solve all this,” Gabbard said. “But it begins with asking the questions that can better help us understand that there … are deeper problems, and the approach that has been taken [by] the brass …[ who are] out of touch with the troops on the lines.”

She said there needed to be a “cultural shift” to deal with all aspects of military personnel’s health — physical as well as mental — and that the stigma relating to all health issues must be addressed.

“Hell, if you go sick call, that’s a sign of weakness,” Gabbard said.

As president and commander-in-chief, she said she would have direct conversations with military personnel.

Catherine O’Connor, the veterans’ engagement director for the Buttigieg campaign, said President Donald Trump has made insulting comments about Gold Star families, as well as about the late  Sen. John McCain’s time as a prisoner of war in Vietnam. Trump also has said that traumatic brain injuries sustained by troops stationed in Iraq are just headaches.

“What does that do for good order and discipline?” O’Connor asked.

The demographics of war veterans are changing as veterans from World War II, Korea and Vietnam die and the number of Gulf War, Iraq and Afghanistan veterans increases.

“Too often, veterans are seen as the photo-op prop,” Gabbard said, noting that both parties have been guilty of the practice. She said veterans are saying that they don’t want to be used by political candidates.

“Our military is a reflection of America,” Gabbard said. “We don’t vote in lockstep and, therefore, should not be taken for granted by any party. You need to be a part of the conversation so you can best inform the policies to solve these problems that are impacting all of us.”