Tuesday, voters in Ward 6 – the District of Columbia’s fastest-growing ward – will decide their representative on the State Board of Education (SBOE), an agency created under the Public Education Reform Amendment Act of 2007, which legalized mayoral control of the District’s public school system.

The board is primarily tasked with advising the State Superintendent of Education and approving statewide regulatory measures and does not determine the budget or oversee school openings or closures.

In August, incumbent SBOE President and Ward 6 Representative Jessica Sutter announced that she will not seek reelection after her four-year term ends in December. She told The Wash in an interview that she wants to focus on a full-time professional career and “make space” for a candidate who might better represent both the interests and identity of students.

“I’m really excited that the two people running for Ward 6 are both black male educators in D.C.,” Sutter said, noting that a region dominated by African American students has been represented by two White educators over the past eight years.

According to latest data from the DC Office of State Superintendent of Education, Ward 6’s overall enrollment in D.C. public and public charter schools has been decreasing from 2018 to 2021. 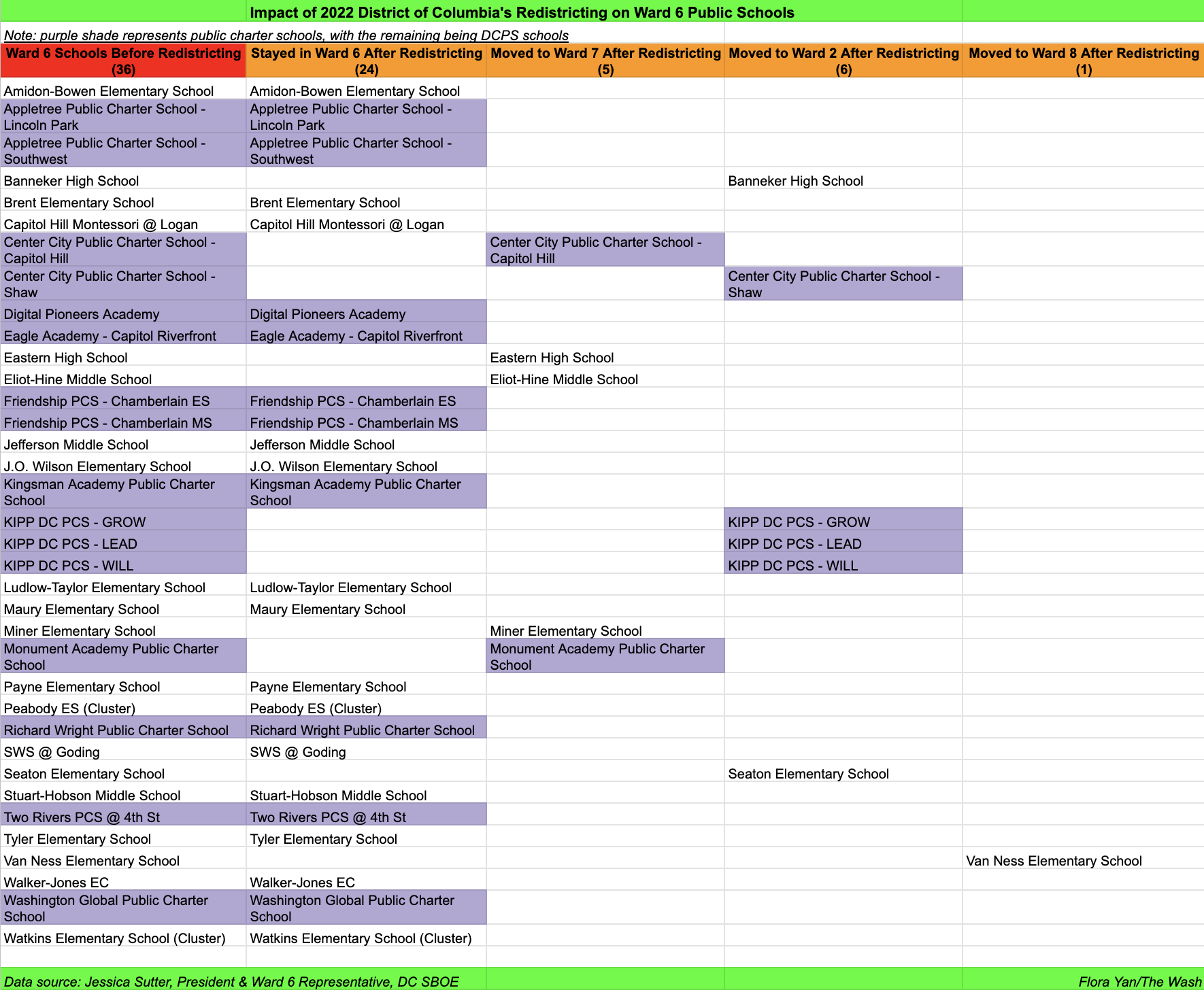 This race also came not long after the completion of D.C.’s every 10-year redistricting, which resulted in Ward 6 losing 12 public and public charter schools, including its only neighborhood high school.

Sutter deems navigating the ramifications of redistricting as the most important education-related issue currently facing Ward 6, with pandemic recovery and federal funding allocation immediately following it.

“I’m hearing from a lot of parents, they also want to make sure that both candidates are paying close attention to pandemic recovery,” Sutter said, “and making sure that we’re making the best choices with that funding for the children.” 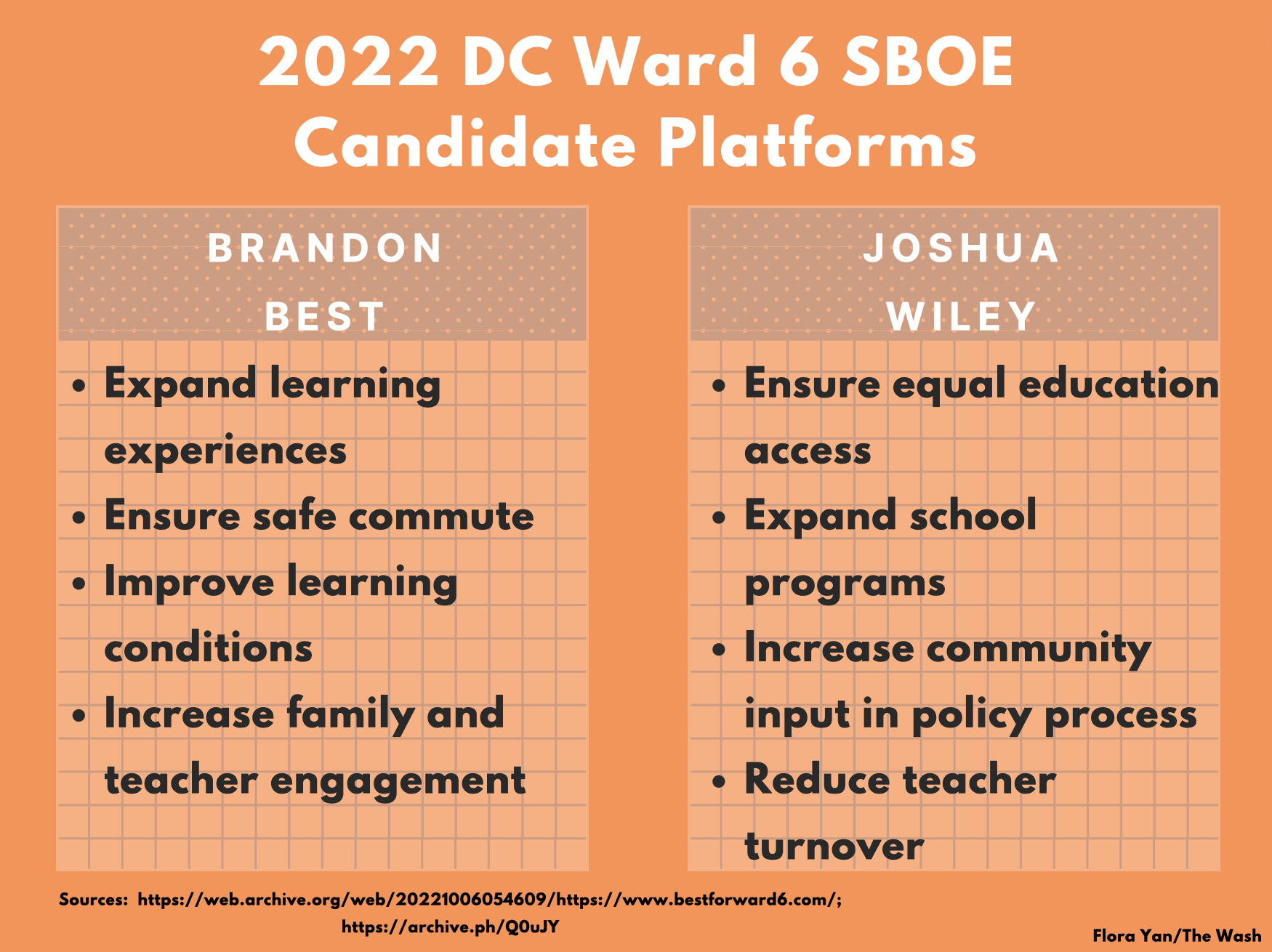 The candidates are Brandon Best and Joshua Wiley.

Best is a third-generation Washingtonian educated in Ward 6 and an 18-year educator who currently works as an administrator for the largest network of charter schools in the US. Wiley is a third-generation educator who started his career as a middle school math teacher in Texas and is currently a District of Columbia Public Schools (DCPS) assistant principal. He announced his candidacy months after the passage of legislation in the DC council this year, allowing DCPS employees to run for SBOE without resigning.

Speaking at the Sept. 8 and Sept. 28 virtual candidate forums, Best and Wiley both agreed on the importance of expanding relationships with other wards to assist students impacted by redistricting; improving student digital literacy by diversifying curriculum such as adding STEM courses; and better-informing parents of students with special education needs about their rights. They also vowed to ensure students’ safety to and from school and stressed the importance of providing inclusion training to teachers.

The candidates shared more diversified opinions on other issues related to their approaches toward improving education in Ward 6 and the District more broadly.

To Wiley, school choice means having “a choice to go to the school right in your backyard, and it should be a great choice.” He believes that parents should always prioritize neighborhood schools. “I think we need to make sure that we are keeping that community strong,” he said.

On the other hand, Best believes that all parents have a “fundamental right to choose where they want to send their kid,” regardless of the neighborhood. “We need to make sure that we’re creating resources to ensure that all schools can succeed,” he added.

Best recognizes the need for continued improvement but still supports mayoral control of the educational system, citing its latest positive impact on student performance, such as leading to the highest scores in midterm assessments and a decade-long pre-pandemic growth. He also promised to ensure that families become aware of the education-related agencies’ varied roles and their respective responsibilities, “so that you can see where the breakdown occurs,” he said.

In the meantime, Wiley described mayoral control as a form of “interference” in school governance and publicly opposed it. He thinks it’s a “hard choice” for the mayor to prioritize education over other issues. “Education should be left to someone who was elected that really knows about education or a group of educators who are passionate about it,” he said, adding that there should be more input from SBOE in the policy process and that the superintendent should be chosen “collectively.”

Responding to a question about the DC Office of State Superintendent of Education (OSSE)’s plan to “replace the one to five-star system for evaluating schools with a numerical score based on standardized test results,” particularly as it relates to providing families with information needed to compare schools, Best said: “Right now, the school report card is heavily influenced by test data. And that leads to more test prep, which actually takes away from real instruction.”

Best supports changing the evaluation criteria by having a dashboard that includes variables such as “school climate, teacher retention, and achievement proficiency.” He said that doing so would also incentivize schools to provide students with a “well-rounded experience.”

Wiley expressed similar opinions. He said under the new plan a school with more White students will receive a much higher score given White students’ “drastic” outperformance over Black students on annual math and English (PARCC) tests. “That disenfranchises communities,” he added, “that takes away from having great teachers at all schools.”

Wiley likewise stressed the need for a “scoreless” dashboard that includes “teacher retention, special education, extracurricular activities,” number of certified teachers, and “information about the principal” so parents can review the schools holistically.

Asked about proposals to improve teacher recruitment and retention, Best said: “There’s so much paperwork, we need to incentivize paperwork.” He also emphasized the importance of increasing pay in “hard-to-staff areas” and ensuring teachers there feel safe.

Meanwhile, Wiley added: “Teachers need to be at schools with strong unions that represent them and support them throughout the school year,” while also underscoring the importance of having an evaluation system that “focuses on growth and doesn’t penalize teachers in their first year.”

He called for a “sign-on bonus offer” modeling the practice of some other D.C. industries and vowed to advocate for fairer evaluation systems, safer working conditions, and higher wages.

Best plans to add a parent and a teacher council to SBOE, mirroring the existing Student Advisory Committee, to supplement current work.

Birnstad thinks that students’ lack of sufficient access to school nurses and nursing staff is an issue that has been exacerbated by the pandemic.

“A lot of D.C. schools, from what I have heard from my peers, either don’t have a nurse at their school or their nurse is not full-time and not in very frequently,” she said, noting that in some instances staff to student ratio is “extremely large.”

Birnstad hopes students can also have better access to mental healthcare professionals and be better educated about mental healthcare care resources. She added that students from underrepresented backgrounds have been facing greater challenges.

Sutter expressed similar concerns. She said the recent PARCC scores demonstrate that students are “really, really far behind” grade level in reading and math as a result of “two deeply disrupted years of schooling,” and that the decrease from 2019 to 2021 scores reflects “the really deep and lasting wounds the pandemic has had” on students’ academic performance.

In order to improve students’ literacy skills in particular, which Sutter thinks would be the starting point of overall academic recovery, she stressed the importance of providing phonics training to educators and ensuring the implementation of phonics-based instruction in classrooms District-wide.

Wells views the lack of sufficient budget as the top issue facing Ward 6 DCPS schools, as some “have not been able to hire back certain teachers or fund a librarian.”

“I would say, probably no school has a totally adequate budget,” she told The Wash. “A lot of schools are dealing with part-time nurses, in some cases, part-time librarians.”

Wells said another “really big issue” is the lack of affordable and sufficient after-school care at some DCPS schools that have lost providers. “They currently don’t have enough spots for all the families looking for aftercare,” she said.

Wells described this as partly a staffing issue. “Some of these aftercare programs were offered by the Department of Parks and Recreation,” she added. “Our understanding is they haven’t been able to find sufficient staff” that would allow them to increase enrollment capacity.

Sutter similarly expressed concerns about inefficient funding allocation, noting that even though currently there are “a lot of financial resources coming into the District,” including the federal Elementary and Secondary School Emergency Relief Fund (ESSER) and “local extra funding that was part of the pandemic relief programming,” “it’s not always easy for schools to get that money into the places it needs to go.”