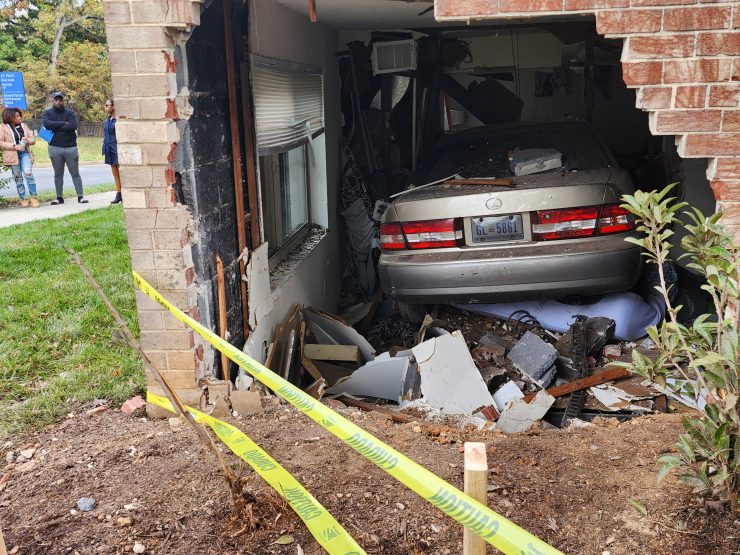 A vehicle plowed through a family home at Clermont Apartments Sunday night, and the suspect is still at large.

Although no injuries were reported, the crash caused significant damage to the home of Gaius Boumediene and his family. Boumediene’s wife, mother-in-law, two-year-old son and baby daughter were in the living room of their apartment when the champagne-colored Lexus crashed into their bedroom, landing on top of a mattress without causing any casualties.

“I was talking to my wife and mother-in-law, we were just discussing, and we just heard the sound, ‘Boom!’” Boumediene said, standing in front of the rubble of his home.

“Around that time, my son, we always send him into the bedroom to go and sleep, so that was just by God’s grace that we did not send him to the bedroom – and this is our bed here,” said Boumediene, pointing to the bed now crushed beneath the weight of the sedan.

Boumediene said that the space is unlivable, and he worries about the state of his damaged household items.

“For now, they are going to, first of all, remove all the big pieces [of rubble], and then, after that, we are going to maybe take any important belongings.”

The property manager for Clermont Apartments declined to comment. The property’s owner, Dreyfuss Management, did not return calls seeking comment.

Boumediene said that, to his knowledge, it is the first time that the apartment complex has experienced this.

“This is America, and I know that before building a structure, I think engineers came to [test] the scenarios that may happen,” said Boumediene, whose family is originally from Cameroon. “I think they need to put something like a fence here.”

The father of two did not see the driver, but heard that the suspect exited the car and ran down Webster Street NE.

The vehicle is a tan Lexus sedan with D.C. license plate number GL 5861.

Velvet Grimshaw, a resident living next door to the Clermont Apartments, arrived home with her husband around 2:00 A.M. to see police at the scene.

“I’m completely floored,” Grimshaw said. “We were totally in shock, like, we got out the car right here because we couldn’t believe it. Like, wow.”

Grimshaw was not at the scene when the crash occurred but said she believes the driver meant to take a right turn onto Webster Street NE.

“This is a dangerous intersection right here, this curve here. So, from our assumption last night, it looked like they may have missed that curve, because I’ve been in the car with people that had almost missed this and came this way right thinking that this is a normal turn.  It’s not a normal turn.”

If you have any information on this vehicle, please contact the Metropolitan Police Department at (202)-727-9099.