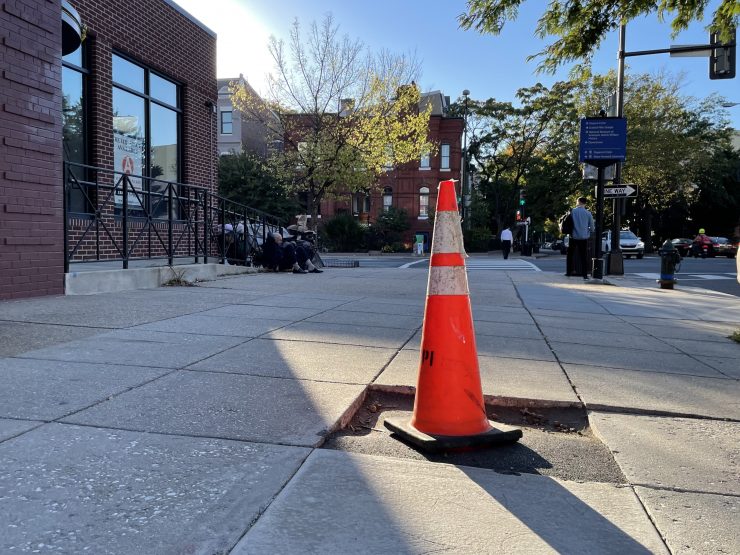 Chubby Lee Washington relies on a walker to get around Washington D.C. ever since breaking his neck in an accident several years ago.

The District of Columbia is not easy to navigate for people like Washington, who are constantly forced to maneuver around cracked and broken sidewalks neglected by the D.C. government.

“It’s everywhere you go in some parts of D.C. The streets are like that,” Washington said. “And we really have to get where we can have these spots fixed. It’s not safe.”

It takes Washington a tremendous amount of time and effort to walk down the street in his neighborhood of Dupont Circle. He can often be found on his daily walks stopping to chat with neighbors. However, Washington has lost his balance and fallen over broken sidewalks throughout the District, and each fall has reminded him to stay cautious.

“The sidewalks need to be fixed,” Washington said. “Because you never know when you’re going to be on them and walking around and missing your steps. They’re all cracked and broken. It doesn’t look good.”

From the southeast quadrant to the northwest quadrant, cracked and broken sidewalks can be found in every neighborhood throughout Washington D.C. Some sidewalk cracks are small enough that one might not see their potential danger until it’s too late. While others are more obvious, such as giant tree roots protruding from sidewalks, resulting in a messy mound of brick.

Through an open records request with the Freedom of Information Act, The Wash discovered that the District Department of Transportation (DDOT) received nearly 8,000 requests for sidewalk repairs over the last year and a half.

Last  year, DDOT completed 45 miles worth of sidewalk repairs; but so far this year, they have fallen behind and only repaired 31 miles. With a few weeks remaining in 2021, it seems unlikely that DDOT will meet its 2020 standard. 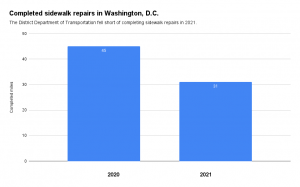 Logan Circle resident Brian Romanowski is a member of the Neighborhood Advisory Commission, a group of locally elected officials who work with the city to address residential concerns. Romanowski has been passionate about infrastructure issues since falling and breaking his arm while driving his bike into a pothole in the Petworth neighborhood.

“After that, I would notice every little pothole and sidewalk issue,” Romanowski said.

In June, Romanowski participated in a Sidewalk Palooza event where he and other Advisory Neighborhood Commissioners gathered their residents to call attention to the broken sidewalks in their wards. The residents used chalk to draw designs around broken sidewalks while they called 311 to make repair requests with DDOT.

Romanowski said many of the requests made at the event were never addressed.

“They do respond, but it really varies, and generally, you just get a service request number and you’re told to wait,” Romanowski said.

According to the DDOT website, the city has up to ten days to investigate a sidewalk complaint, and 270 days to complete a sidewalk repair. But not all sidewalks are repaired within that time frame, if they are repaired at all.

Romanowski said he waited over three years for DDOT  to finally address a sidewalk repair request he made for a dangerous sidewalk on 15th Street NW.

“Now it’s great, but it took over three years to get that one section of sidewalk fixed. Which is why I try to enter any sidewalks that I notice are having issues into their system, immediately,” Romanowski said.

Sometimes Romanowski will take matters into his own hands while he waits for DDOT to make its repairs. There is a large hole in a brick sidewalk along Riggs Street NW that someone could easily fit their entire foot in. Romanowski has since placed a construction cone over the hole to warn pedestrians of its danger.

“You know, you’d think if it was a hole, they’d come out and put a plate over it, or do something to secure that section of the sidewalk,” Romanowski said. “But I don’t even usually see that.”

But while cracked and broken sidewalks are a nuisance to all D.C. residents, they are particularly troublesome for the mobility impaired.

Ian Watlington is a Disability Rights Advocate who has cerebral palsy and uses a wheelchair.

He said there had been times when a sidewalk was so mangled that he was forced to venture into street traffic to avoid it.

“I am especially fearful of going into the street and using that as an option,” Watlington said. “I’ve done that a couple of times, but I avoid it at all costs.”

Watlington switches between a manual wheelchair and an electric wheelchair. Still,  the manual option poses its own concerns because sometimes he will not have the physical strength to propel himself over extreme cases of broken sidewalks.

For Watlington, action from DDOT is lethargic, if anything at all. He wants to know why the city is capable of adding bike lanes and extending outdoor patios but is unable to make the sidewalks passable.

“In comparison to the disability population as a whole, the wheelchair users are a large chunk of it, and we are tax-paying citizens. We consume goods, we pay taxes, and to not take our safety as a priority is a significant problem,” Watlington said.

For D.C. residents concerned about sidewalks in their neighborhood, there are three options for filing a repair request: call 311, enter a request through the DDOT portal, or post a request on Twitter.

However, with nearly 8,000 requests for repairs coming in, a 270d day wait period for repairs and data showing slower fixes this year, those kinds of figures aren’t a great sign for getting anything done soon.