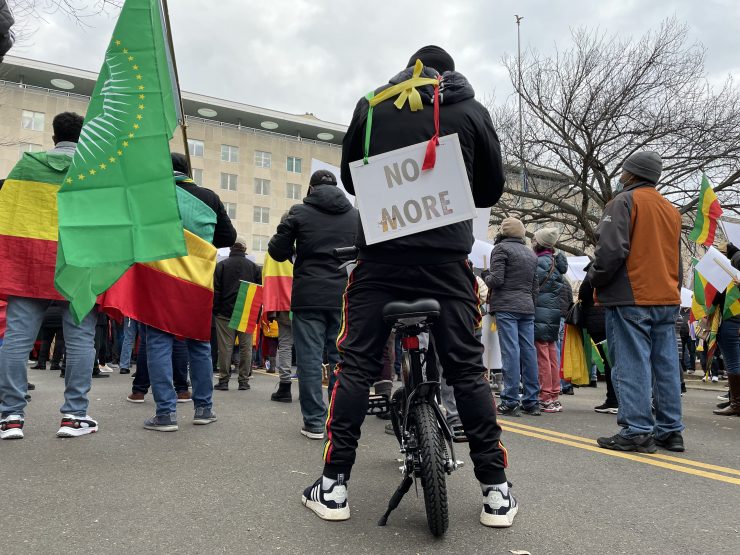 Ethiopia has been in a civil war for over a year with former governing party Tigray People’s Liberation Front. Demonstrators outside the State Department on Friday say the Biden administration has undermined the democratically elected government by supporting TPLF.

A crowd of demonstrators, mostly Ethiopian refugees, donning red, yellow and green filled the courtyard of the United States State Department Friday morning with the sound of traditional Ethiopian tunes and beats.

Demonstrators called for an end to the Biden administration’s current policy in Ethiopia, which they say undermines the country’s democracy by siding with a terrorist organization and has the potential to destabilize the horn of Africa.

The event was hosted by GETFACTet, a group seeking to create awareness within the American public of Ethiopia’s current state of affairs, and brought roughly 1,000 people to the demonstration in support.

“We are here to save our country,” said Bsuvi, 20, who asked not to use her last name. “And keep it from falling apart.”

The group has been organizing in the District every Friday for the past month in front of places like the White House and the Capitol building, usually drawing a crowd of thousands.

Co-organizer Berhanu Taffse said demonstrators are there to say “no more to sanctions, no more abandoning the voice of Ethiopia, silencing the horn of Africa.”

Ethiopia has been entrenched in a civil war since last year as its first elected government, ruled by Prime Minister Abiy Ahmed, fights off Tigray People’s Liberation Front — which previously ruled the country for 30 years and represents the third largest ethnic population in Ethiopia.

The Ethiopian government removed TPLF’s status as a legal party and formally classified the group as a terrorist organization in May, The New York Times reported.

The civil war is estimated to have resulted in the deaths of tens of thousands of individuals, prompted more than 61,000 Ethiopians to seek refuge in Sudan, and internally displaced over 2 million, according to a bill drafted in the Senate that addresses peace and democracy in Ethiopia. The bill would reduce development funding and security assistance, implement visa sanctions and promote high-level diplomatic engagement in the country.

Taffse said the majority of Ethiopians have been a champion of peace in the region, but a small number of elites “want to maintain control and create fractures.”

Demonstrators said the bill misrepresents Ethiopia and ignores “horrific war crimes” committed by the TPLF while placing the blame of the war on Ethiopia.

“[TPLF] need to disarm, they need to stop their aggression,” Taffse said. “America needs to step up in saying this because American people value democracy and value peace and this is the first step to do.”

David Minasse, who has lived in the U.S for 40 years, said it is “completely wrong for a democratic nation like the United States to do such a thing” in supporting TPLF.

He said TPLF goes against the values the U.S. promotes and that supporting the former ruling party does not “benefit the United States or its people.”

If passed, Minasse said the Senate bill would “damage the economy of Ethiopia” and “hurt the population — not the people in power.”

The war has caused a humanitarian crisis that has gained foreign attention, including famine and ethnic-motivated arrests which the Ethiopian federal government has denied.

Taffse said the groups slogan, #NOMORE, is meant to condemn the U.S. for “sanctioning rather than supporting and encouraging the democracy Ethiopia is actually emerging into.”

Aster Berhane, 51, said she came to Friday’s demonstration to tell the U.S. government to stop putting sanctions on the Ethiopian government and to stop trying to “impose, or ideas, or whatever they want to do on our country.”

She said peace and an end to the civil war are the ultimate goals.

“I started showing up here… because this is a very critical time in Ethiopia and my presence here — what I can say and do — is significant,” she said.

“We’ve been through a lot.”