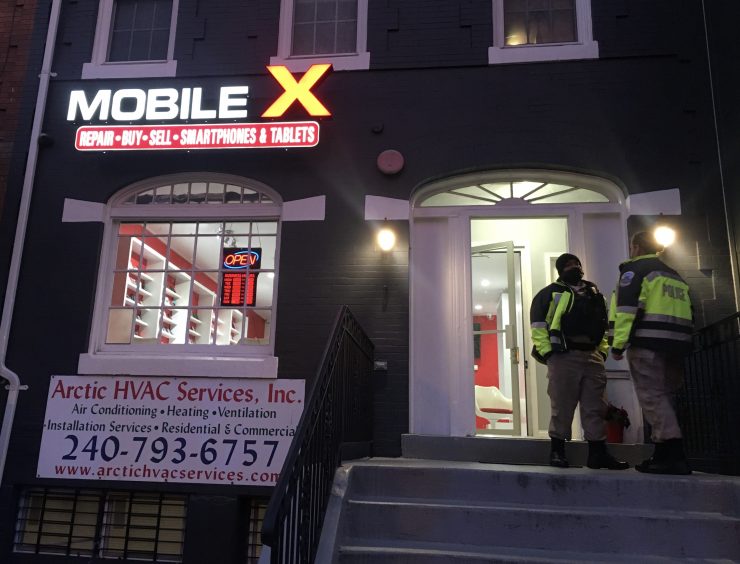 Metropolitan Police are investigating an armed robbery at a mobile phone and repair store Thursday evening.

The robbery occurred in the Northwest neighborhood of Columbia Heights on the 3400 block of 14th Street NW, where the popular shopping district intersects Meridian Place. Suspects fled the scene before police arrived.

The DC Metropolitan Police Department tweeted about the incident earlier this evening. Police are now looking for four masked suspects — three males and one female — all wearing dark clothes.

LOOKOUT: Three males and one female, all masked, all wearing all dark clothing, one armed with a black handgun with an extended magazine.

DO NOT TAKE ACTION CALL 911

One of the suspects was armed with a handgun with an extended magazine attached to it, police said. The District prohibits firearm magazines that carry over 10 rounds.

“This is an active and open investigation,” Hickman said in an email.

According to police on the scene, no persons involved were injured, and EMS was not called.

MPD seeks the public’s assistance in identifying suspects in reference to an Armed Robbery (Gun) of an Establishment offense that occurred on 12/9/21, in the 3400 block of 14th St., Northwest.

The owner of Mobile X, Thomas, who asked only his first name be used, was the only employee inside of Mobile X at the time of the robbery.

Thomas told The Wash he’s feeling “not so great.” Of the merchandise stolen, he said the robbers took 1,000 dollars and some iPhones.

Violent crime in Columbia Heights: ‘Another night, another robbery’

D.C. Mayor Muriel Bowser announced Thursday that the District would expand violence prevention programs and intervention efforts within three communities across the District. In a press release, she said this involves distributing over  $1.1 million in grants in response to the increase in gun violence and the number of homicides in the District, which hit an 18-year high this month.

Columbia Heights has experienced a slew of crimes involving firearms in the past month. On Monday evening, dozens of shots were fired on Fairmont Ave, according to WUSA9. The Wash reported bullets were fired towards a train at the Columbia Heights metro station on Tuesday.

One passerby saw police outside the business and muttered to himself, “another night, another robbery” as he entered the door to his apartment, which sits adjacent to Mobile X.

Saul, who didn’t want to use his last name, runs an HVAC shop downstairs from Mobile X. Notified of the armed robbery at the phone store, he came to help inspect the security cameras of the premises, only to learn that one was ripped off of the front of the store.

To his dismay, Saul said he went looking for another camera for his place only yesterday, which he said he might install tomorrow. Still, he said he’s gone to great lengths to ensure his business’ security.

“Before they break into my place, it will take at least a half-hour with a power tool because I know what I have,” Saul said.

Saul arrived in D.C. in 1989 when he was 16. From his time living in the District, Saul said in D.C. it helps to have eyes on both sides of one’s head.

Next-door neighbors living in a renovated condo called Columbia Heights a “transitioning neighborhood” and said crimes like this come with the territory. They requested the Wash not use their names, and declined to have their first names used.

They said they were home at the time, but didn’t hear anything when the crime occurred. The neighbors added that Police looked at the neighbors’ security cameras, but were unable to catch the suspects on film.