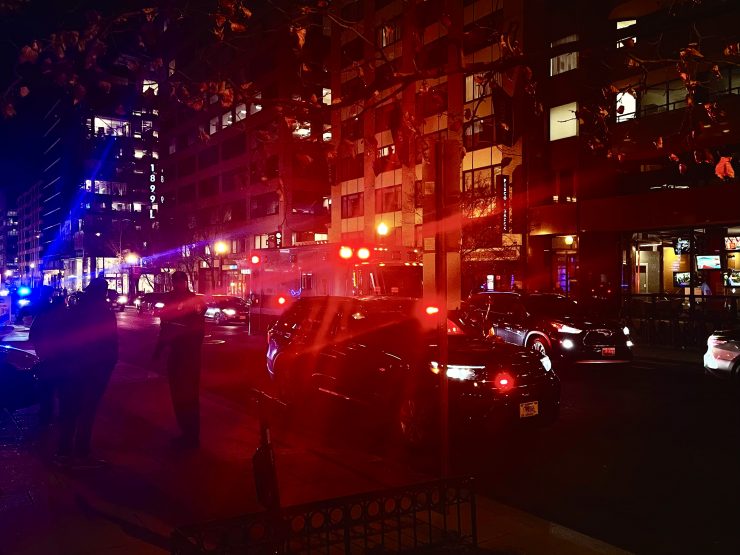 A scooterist riding south of Dupont Circle sustained minor injuries Wednesday evening after being struck by a vehicle, which resulted in two lane closures during heavy rush-hour traffic.

Sam Machmour was traveling eastbound on the 1800 block of L St NW en route to do some holiday shopping when a man driving a rental car sideswiped the Downtown D.C. resident.

“She’s been riding for over a year now and she’s never had an issue,” said the scooterist’s husband, Karan Machmour. “This is the first time she’s been in an accident.”

First responders on the scene transported the victim to the emergency room at George Washington University Hospital to have her injuries assessed. Karan Machmour said his wife was “shaken up” after the incident, and complained of lower back pain and a headache.

Sam Machmour, who frequently uses the city’s e-scooter program to commute and run errands around the district, told police that she was just feet from her destination when she was knocked off her BIRD e-scooter by a dark, slow-moving vehicle.

“She was almost there,” said Karan Machmour, pointing to the store’s Christmas window display that shone colorful lights onto the site of the accident. “If you look at the car’s impact, you can see that she almost made it through.”

Police on the scene told The Wash that the driver was emerging from a parking garage when he failed to yield in time to avoid hitting the scooterist. The vehicle sustained minor damage to its right headlight.

The driver of the vehicle declined to comment for this piece.

Accidents involving e-scooters have been on the rise in Washington, D.C. and across the country, for several years, and have sparked conversations about traffic safety and how to regulate the popular ride-sharing option.

Several cities, along with the district, have passed legislation to regulate e-scooter use within the city’s borders, including laws limiting the speed at which the devices can travel and where the scooters can be ridden.

Currently, six different companies, including Lyft and JUMP by Lime, are permitted to operate nearly 13,000 e-scooters in the district, according to the District Department of Transportation.

Scooters and bikes are allowed to ride on sidewalks in Washington except for in the nation’s capital’s highly congested Central Business District, where the accident involving Machmour took place.

Today, nearly 3 out of every 5 scooter riders who are hospitalized in the capital city are injured while riding on the sidewalk, and roughly a third of those riders got those injuries in areas where sidewalk-riding is banned, according to a 2020 study by the Insurance Institute for Highway Safety.

Researchers from the same study compared their findings to existing data on cycling injuries and found that scooterists have higher rates of injuries than those traveling by bike.

The Metropolitan Police Department can fine scooterists $25 if they are found to be riding on the sidewalk in the Central Business District; however, the D.C. Department of Motor Vehicles reported that zero tickets were issued to scooterists or people cycling on sidewalks in the area in 2019.

“She had just gotten on the sidewalk to go into the Nordstrom Rack,” said Karan Machmour. “She wouldn’t normally do that.”

Police, firefighters and EMTs shut down two lanes of traffic following the incident for roughly a half-hour, causing a slowdown in the busy neighborhood during rush hour.

No charges were filed against the driver or scooterist at the time of the crash.