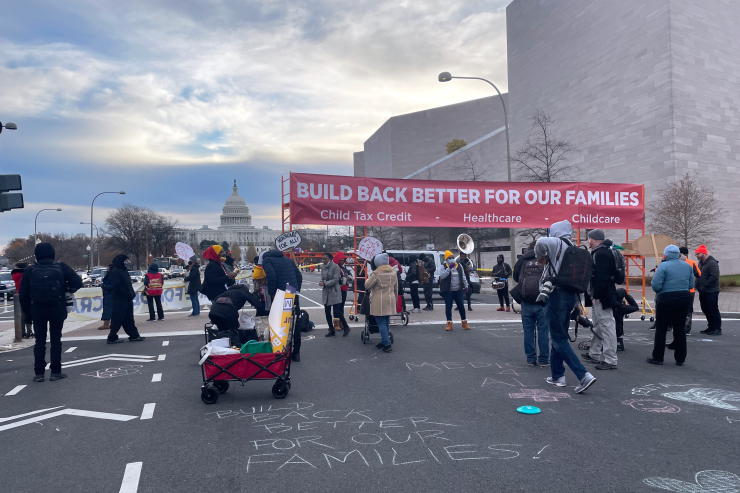 In nearly freezing temperatures, hundreds of protestors joined forces to blockade streets across Capitol Hill early Tuesday morning. Across five different blockades, protestors demanded that Congress pass some progressive policies in the Build Back Better bill before the end of the fall legislative session on Friday.

The unpermitted protest and street blockade caused a slowdown during rush hour. According to the Capitol Police Department, two protestors were arrested for obstructing and inconveniencing traffic this morning and another 38 were arrested later in the afternoon at a second protest.

The protests, marketed as  “Deadline for Democracy,” were planned by ShutDownDC. Founded in 2019, ShutDownDC considers themselves “an organizing space where organizations and individuals can come together to organize direct action.” Their goal was to urge lawmakers to fulfill the social spending promises they made now that the 2021 legislative session is coming to an end.

Protestors built five blockades out of wagons, scaffolding, and other materials, obstructing multiple traffic intersections around Capitol Hill. The blockades were organized by CODEPINK, Extinction Rebellion DC, voting rights activists and others.

Although each blockade stood for a different purpose, protestors said they were unified in their cause.

“We have to take bold actions to get people to pay attention because the government isn’t paying attention,” said Reb Spring, a 15-year old student attending Duke Ellington School of the Arts.

A difference in jurisdiction

Because demonstrations were spread out around the Hill, some fell into the jurisdiction of the Metropolitan Police Department, while others were in Capitol Police jurisdiction.

After CPD warned protestors blocking the streets adjacent to the United States Botanic Garden to disperse multiple times, activists moved to the sidewalks. However, on the other side of the garden, CPD arrested two individuals and plans to cite them for blocking traffic.

CPD is unsure how long the arrested protestors will be held because it depends on a “range of variables,” according to a public information officer.

On the other hand, MPD seemed more lenient with protestors, allowing demonstrations to block intersections like the one at 4th St. and Independence Ave. for at least two hours. They did not make any arrests, according to a MPD public information officer.

With at least eight major thoroughfares shut down during rush hour this morning, commuters and lawmakers alike experienced significant delays.

While MPD blocked off entire intersections in some areas for demonstrations, other streets like 4th and Pennsylvania Ave. were partially closed to help ease the traffic flow.

Mark Sussman, a D.C. resident, tweeted the demonstrations on Pennsylvania Ave. caused the “most traffic” he’s seen “in two years.”

MPD is on the scene.

Those interested in joining the Dec. 7 demonstrations could sign up in advance on ShutDownDC’s website and were able to choose a specific blockage point, and whether they were willing to be arrested for the cause.

Lori Emrich joined the blockade in front of the Smithsonian American Indian Museum. She said while she was not interested in being arrested, she believed, “it’s more than past time to act” on gender and social issues.

Olivia DiNucci, an organizer and activist with CODEPINK – a national human rights organization against militarism – helped organize the blockade in front of the Smithsonian, calling on Congress to “stop business as usual,” cut the Pentagon budget, divert funding to social programs and limit military carbon emissions.

“We are here for life-affirming programs,” DiNucci said. “We’re shedding light on the hypocrisy in Congress – that 778 billion go to the Pentagon budget, yet we are fighting for crumbs.”

DiNucci said despite not having a permit for the protest and road closure, she would remain at the blockade “until morning traffic is out.”

Other blockades throughout the Capitol featured a brass marching band, a go-go band aboard a flatbed truck, and a “300-foot long pipeline snake” made by indigenous youth activists. Each effort was united in their demand for the Senate to take decisive action on Biden’s $1.75 trillion Build Back Better bill before the congressional recess on Dec. 10.

Protestors ended their traffic blockades around 11 a.m. Many demonstrators relocated to Union Station to join efforts with CASA and United We Dream for a march to demand the inclusion of  immigration reform in the spending bill. By late afternoon, 38 protestors associated with the immigration reform demonstration were detained by Capitol Police, according to a spokesperson.