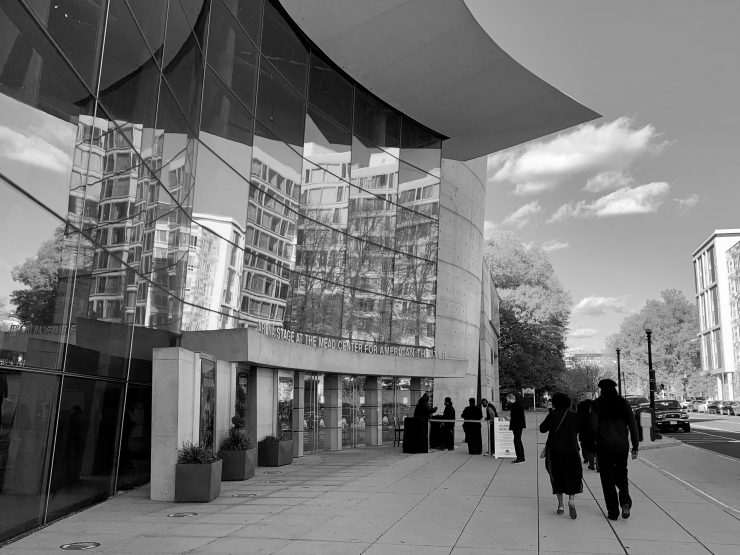 Warm hugs and excited hellos echoed around the circular Fichandler stage on opening weekend of Seven Guitars at Arena Stage at the Mead Center for American Theater in Southwest D.C.

Two strangers in row G introduced themselves as they sat down and immediately launched into a discussion about the themes of Seven Guitars: death, mortality and our shared human experience.

August Wilson’s play opened up in a Pittsburgh backyard, where old friends gather after a funeral. The play was set in 1948– but the themes of death and mortality ring true amid a global pandemic in 2021.

“Every time I look up, it seems like people are dying” said the character Canewell during the opening act of Seven Guitars.

Just several months ago, Arena Stage was packed, but for a different purpose. In April 2021, the performing arts center functioned as a mass COVID-19 vaccination site for the Southwest community.

Arena’s Associate Artistic Director Teresa Sapien told The Wash, the vaccine center was directly tied to getting Southwest “up and running again.”

“I think it was really important for us to both serve as a hub for the Southwest community first as a vaccine site and then to reopen our doors for the theater,” she said. “It really helped us feel like we were able to submit some good to the community.”

According to MedStar Health, Arena Stage served as the only high-capacity site in the Southwest area of the District.

Arena Stage in SW DC becomes a high capacity vaccination site this morning. Bubbling with excitement. Partnering with MedStar and DC government to make it happen. Arena is a community resource and it’s great to see our center reopened to get shots into people’s arms. 1,000 a day! pic.twitter.com/8I58hQPpXV

Arena reopened for live theater performances in September, and since then, Sapien said the comeback has been steady.

One of those excited theater-goers was Robert Yates.

“It’s fabulous to see the arts back, ” he said.

LaWanda Ware, standing next to Yates, told The Wash life is better with the performing arts.

She said the theater serves as an escape from everyday life and the COVID-19 pandemic.

“It brings back quality of life completely in his area, rather than the insanity that is happening all around the world right now,” she said.

Sapien said Arena’s time as a vaccination site allowed them to rethink COVID-19 protocols throughout the facility, and prepared them to come back safely.

“People are finding theater to be a fairly low risk experience for them right now, because we are requiring proof of vaccination, or a negative COVID test to enter the building,” she said.

Loyal patrons like Arena Stage Member Sharon Frieman told The Wash, she showed up when the theater put on virtual shows in 2020, but it wasn’t the same experience.

“In the theater, the audience forms a kind of camaraderie that you don’t get if you’re just watching on a Zoom or on a streaming service,” she said.

Joe Freeble also emphasized the power of camaraderie and said Arena is where old friends come to gather and experience great theater together.

“The energy, the camaraderie, the sort of connection between the actors and the audience. You just don’t get on a screen.”

Feeble and Frieman were among many theater-goers who expressed that Arena isn’t just a performing arts center, it’s a cultural hub for the Southwest community.

“If we go in a group, we wind up talking about it, and will find friends who have gone to see the same show we have,” said Stuart Johnson, a decades-long Arena attendee.  “We’ll talk about it, and it will extend the enjoyment.”

During the play’s intermission audience members gathered near the concession stand, and mingled with strangers as they grabbed complimentary granola bars and bottled water.

While a death-theme runs throughout Wilson’s Seven Guitars, the play is also about the human experience and a second chance at life.

A second chance is precisely what Arena Stage got this year when it reopened.

Sapien said while the theater was more than happy to serve as a vaccine site and a symbol of hope during the height of the pandemic for the Southwest community, better days are ahead.

“It is starting to feel like a more complete and active neighborhood,” she said. “D.C. just felt a little quiet for the last year and a half.”