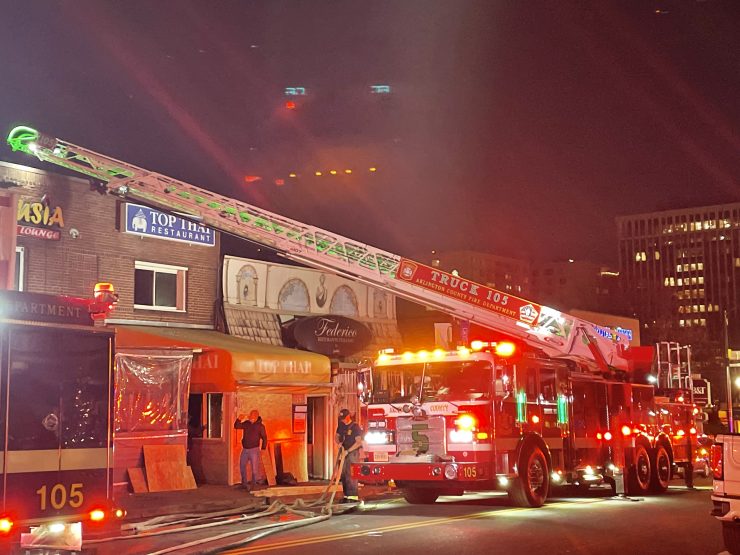 Fire Department investigates why a blaze at the same establishment reignited.

The smell of smoke filled the air as units arrived at a fire scene on 500 BLK of 23rd St. at approximately 4:25 p.m. yesterday. The fire brought approximately 13 fire apparatus to the scene, according to Arlington County Fire and Rescue spokesperson Nate Hiner.

“We had another small fire at the same place,” Arlington County Fire Chief William Earley said.

Units arrived on the scene and located the fire that was quickly extinguished, Hiner told The Wash last night. 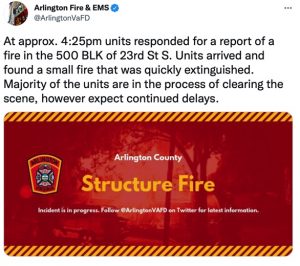 The fire that occurred the previous night appeared to have been larger, emanating lots of smoke around the area, witnesses said.

The first fire was a two-alarm fire that occurred at roughly  10 p.m. and took about two hours to extinguish as flames shot through the roof and spread around the building.

An Arlington resident who witnessed the fire said that he thought it was an electrical fire due to electricity going out in the building earlier that day. However, the fire department nor the restaurant has confirmed the cause of the fires at this time.

Ray Thomsgiri owns Urban Thai restaurant, located only a couple of restaurants down from where the fire occurred. He said he was not at the restaurant last night but received a call about the fire.

“Our employee called us last night saying there was a fire somewhere,” Thomgsiri said.

There did not appear to be any damage around Urban Thai or the surrounding area.

Arlington resident Dassy Reyes could see the fire department returning to the scene from her home nearby.

“When I came home, the fire had already started…I don’t know much about it, just that the name of the affected restaurant is Top Thai,” Reyes said.

Top Thai was closed when both fires occurred. However, the hookah bar next door was open at the time of the first fire.

According to Hiner, there were no reported injuries as the building is still vacant from the previous fire and an ongoing investigation is occurring.

“No reported injuries and the fire is currently under investigation. The building is still vacant following the fire the previous evening so there were no evacuations, however crews conducted searches consistent with policy,” Hiner said.

The Arlington County Fire and Rescue team said in a press release last night that there was nearly 1.8 million dollars in damage done in the preliminary findings from their investigation. The cause of the fire is still undetermined.

Top Thai and surrounding businesses have not yet commented to The Wash on the damage done to the building but local Arlington residents took to Twitter saying that it looked like the hookah bar and Top Thai had sustained damage to the roof and windows.