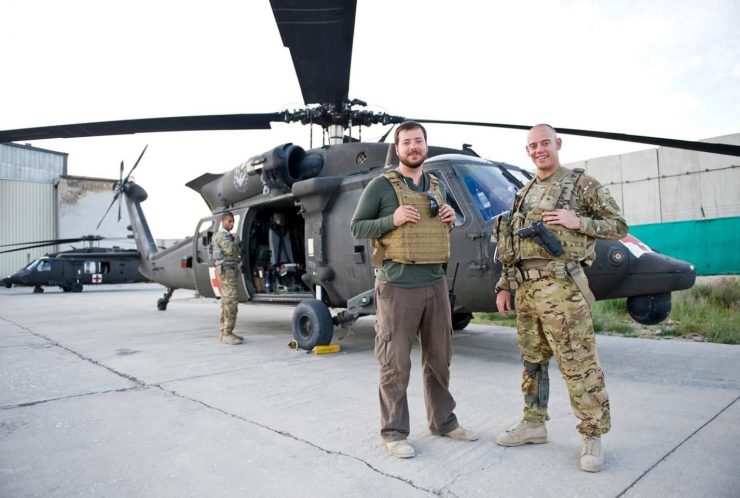 Drew Brooks, 36, spent 10 years at the Fayetteville Observer covering Fort Bragg in North Carolina, the largest military installation in the United States, as well as its surrounding military communities. On this Veterans Day, Brooks shared his unique perspective working at the newspaper where he covered the base and followed its soldiers as an embedded reporter across Iraq, Kuwait and Afghanistan. Brooks left the Observer in 2018. He recently moved to South Carolina, where he had majored in journalism at the University of South Carolina back in 2007.

The following is an edited Q&A exchanged over email with Brooks, who since 2018 has served as Senior Writer/Editor at The National Guard Association of the United States. He’s set to leave in a few weeks, and is waiting to see what comes next.

What’s on your mind concerning Veterans Day this year?

I typically look back on my own experiences and the service members and veterans who I worked with over my 10 years covering Fort Bragg. There were a lot of good memories and once-in-a-lifetime opportunities for me. I wrote a lot of fun stories, a lot of heartbreaking stories and hopefully some stories that made an impact.

Veterans Day was also a key focal point, a time when we tried to tell important stories about the military community. I’m proud of a lot of those stories and have stayed in touch with many of those who I’ve written about.

Could you tell me about how you first started covering the military?

I knew little to nothing about the military before I joined the Fayetteville Observer in 2008. At that time, I was hired as a night cops/breaking news reporter but in Fayetteville, everything eventually has a connection to the military. About a year later, I transitioned to the criminal justice beat covering the court system and that took me onto Fort Bragg for the first time to cover courts-martial. Eventually, the opportunity came for me to move onto the military beat and I jumped at the opportunity.

In Fayetteville, I always viewed the military beat as the premier beat, because so much of the community and the community identity revolves around the military post. I don’t recall what my first assignment was on the beat, but I recall one of the first had to do with a noncombatant evacuation from a partner nation following a natural disaster.

I remember being out in the field and interviewing soldiers only to have those same soldiers, later that year, perform the same mission following an earthquake in Haiti.

What was it like when you first started covering Fort Bragg?

Fort Bragg was a daunting beat for a young reporter. There are literally dozens of different organizations to cover, some related but many not. That’s a lot to keep track of and a lot of people to build relationships with. But it’s also a very intertwined community, so once you start making inroads, you often end up working with the same people or developing a larger reputation. Eventually, many of the unit leaders and Public Affairs Officers (PAOs) I worked with on a daily basis would reach out to me for stories.

A lot of people think the military is one homogeneous community because everyone dresses alike and have the same sort of haircuts. But I found that wasn’t the case. Just like any other small or mid-sized city, there are people of all kinds, all sides of the political spectrum, all sorts of personal beliefs. Many were united by a desire to serve their country and a love for their service.

How close did you get to the folks stationed at Fort Bragg?

That was always a mixed bag. Some soldiers simply didn’t want anything to do with a newspaper reporter. Others seemed to understand what my role was and how it served the community. I was there to tell the good news stories but also serve as a watchdog of government money and government trust. The best leaders understood both roles and tried to help me do my job because they realized it was what was best for the larger community, even if it didn’t always look the best for the installation.

Really, it just took being there to earn their trust. I covered as many training exercises as I could. Overseas, I went on patrol when they did. I got shot at. I crept past areas that could have an IED. Just being there opened a lot of eyes. The fact that I was willing to “embrace the suck” as they did gained me a lot of respect.

…The important thing was that trust. You can disagree in the office, but when you’re in the field and you’re being tested, you have to trust those you were with.

What did a typical reporting day look like on base?

That’s one of the things I liked about the job most of all. There was no typical day. Some mornings I may be on Bragg before 6 a.m. Others until well after midnight. I could spend the day in a helicopter, in a plane circling drop zones or in a conference center. I liked that variety and the fact that it could keep me out of the office for long stretches.

A calm day, for me, might have been one event or interview. On my busiest days, I bounced from unit to unit. I could start my day out on a drop zone, head out to the woods for a different type of training and conduct several interviews in between. It was not completely unheard of for me to work on six or seven stories at a time on a particularly busy day.

What were some of your favorite stories you wrote?

There are too many to list, but I think I had the most fun with some of the personality features I wrote. Highlighting individual soldiers with unique backgrounds, unique reasons for serving, unique ideas about how to help their communities. That was always a big thing for me. I wanted to show that there was no single archetype for the American soldier. They are just as varied as the rest of the nation.

What have been your guiding principles around covering the military?

Same with any type of reporting, just try to be fair. There’s lots of ways to define “fair” and there were times when military leaders definitely would have preferred I NOT write a particular story. But I like to think I proved to many that I wasn’t head-hunting and that I was doing my job and part of that is holding others accountable and letting the public know when things have gone wrong.

Tell me about the embedding process and how it started for you. How did that begin and when did you find out you’d be going to Iraq and Kuwait?

My first embed, everything was done for me. I had only been writing about Fort Bragg for a few months and the paper’s leaders reached out and asked if I would be willing to spend a month in Iraq and Kuwait at the end of 2011. I jumped at the chance.

I was just excited. I was still new to military reporting, but I was hoping to jump into the deep end and this was my opportunity.

Could you tell me about the various units you embedded with and how would you explain them to a civilian?

There were so many, some specialized, some just there to do whatever was asked of them. I’ve covered logistics units, infantry, aviation, Special Forces. If a job exists in the civilian world, the Army probably has an equivalent. I would always explain to others how most of the Army wasn’t the “door kickers” so to speak, but there were HR reps, IT personnel and so much more that doesn’t get as much press.

What was it like arriving in Afghanistan for the first time in 2012? Could you describe the first day?

It was a surreal experience, to be sure. I again flew civilian air to Kabul, then actually left the airport to take a taxicab to the base (which was located on the other side of the runway.)  There were lots of security checkpoints and my photographer and I definitely stood out as Americans. I remember being a little uneasy about it all, but I was also just exhausted from travel and ready to start work.

What were some of the fondest memories you have from that experience?

We stayed on huge, sprawling bases with modern amenities like TGI Fridays and coffee shops. But my favorite times came when we were in these tiny camps with just a platoon or company of soldiers. These outposts relied on porta johns, sometimes didn’t have showers and often only one or two hot meals a day. But I think that’s where I earned a lot of respect. To go out on a 7-hour patrol on foot and come back after maybe having been shot at and sit down on the same dirt to eat an MRE (Meals, Ready-To-Eat) showed soldiers that as journalists we weren’t there for war tourism, we were willing to do what they were doing if it meant better telling the story.

What were some scary moments or some sad ones?

There were times when outposts were mortar-ed. There was a firefight on patrol, potshots on others. I remember seeing wounded Afghans seeking medical help and flying in medevac helicopters with others who have been seriously injured. I don’t think the severity of any of that ever really hit me in the moment. I would be running on adrenaline, immersed in getting the story.

What does it mean to you to tell the stories of those deployed overseas?

I always looked forward to that. For many in Fayetteville and Fort Bragg, it was their only real insight into what their soldiers were doing. Not all soldiers and airmen told their families much about their deployments or how their training at home prepared them for those missions. I know I connected the dots for at least a few families and gave them a better appreciation of why their loved ones might have long days or miss birthdays and holidays.

What are your thoughts today looking back on those experiences?

They weren’t always easy, but I enjoyed them. More so in retrospect, I think. I have a small child now and my days of war reporting are behind me. I can’t imagine leaving home for two months or more to do that type of work. But I’m glad I was able to do it when I did. Those experiences will be with me forever.