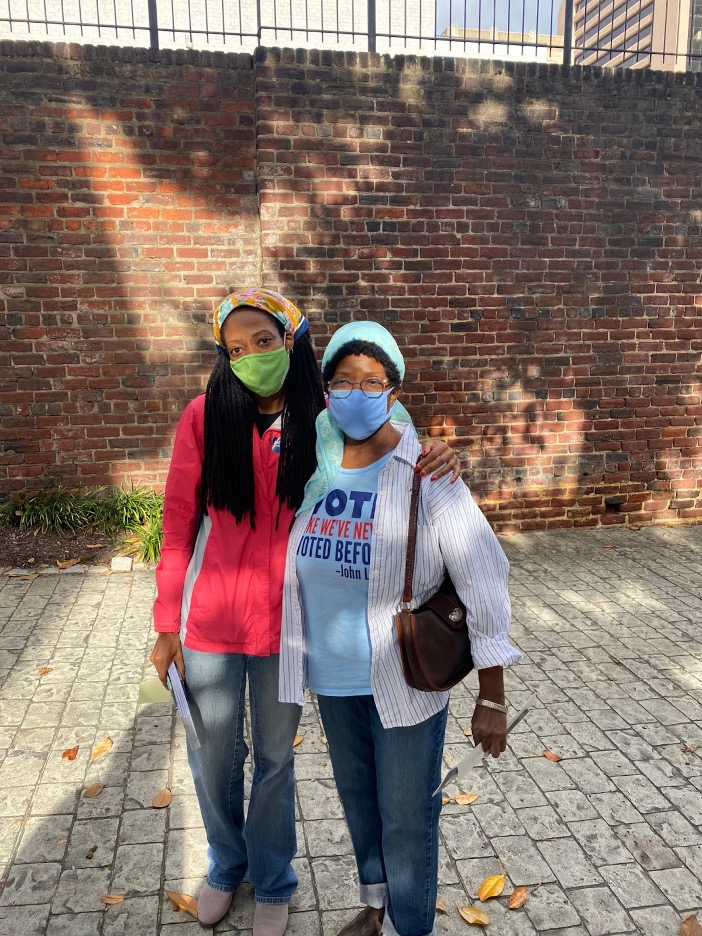 Democratic canvassers are motivated to get McAuliffe back into the governor’s mansion, mobilizing voters on key issues – voter rights, women’s rights, and COVID-19.

By Harry Ehlers and Ashley Winiewicz

RICHMOND, Va. — Gov. Northam kicked off the canvassing event for Terry McAuliffe in Richmond Virginia, Sunday by reminding them how crucial their role is in this election.

“The most important thing between now and Tuesday is to go knock on doors, make phone calls, and if they haven’t already voted, to strongly encourage them to get to the polls,” Northam said.

The Minor family decided to take this advice in stride. The mother-daughter duo, Rose and Chella Minor, hail from Richmond.

Rose, 32, is not new to political involvement. She is the Director of LGBTQ+ Outreach and Assistant for Community Engagement for the office of constituency services in the Virginia state government.

Her mother, Chella, a seasoned canvasser, volunteered in the 2008 Obama and 2016 Clinton election efforts and continued that energy for McAuliffe. Chella encouraged her entire family to be active in the campaign.

For Rose, the most important issues are voting rights, LGBTQIA+ protections, and education policy.

“I would say, inclusivity in schools, and just making sure that all Virginia children learn a complete, more broad history of Virginia, that’s very important,” Rose said.

For Chella, issues of climate equity, voting rights and reproductive healthcare have motivated her to canvass.

“We don’t want to be Texas. And everybody knows what that means… I think that health centers are health centers; they do more than what the media has said that they do,” said Chella.

The election rests at the crossroads of the Texas abortion bill that has garnered national criticism from reproductive-rights advocates.

Fearful of the Commonwealth’s future and the loss of Democratic rule, Rose and Chella said their efforts to get out the vote are essential in continuing the progress made under Northam.

“Thank God, that in Virginia, we have gotten our vaccinations up,” Rose said. “McAuliffe has a better plan in place for COVID. We really don’t want to see any more children in Virginia die.”

The COVID-19 pandemic has taken the lives of 10 children in the Commonwealth. As the pandemic continues to rage among the unvaccinated, fears of mandates being rolled back in schools are an influential factor for voters.

The Minor mother-daughter duo, dedicated Democratic canvassers, are among many committed constituents getting out the vote for McAuliffe this weekend.

At his closing rally at Hardywood Brewery on Monday, McAuliffe thanked volunteers, expressing the importance of on-the-ground organizing.

“Just this weekend, 258,000 doors were knocked on Saturday and Sunday,” he said. “That is a presidential-level turnout-level operation.”