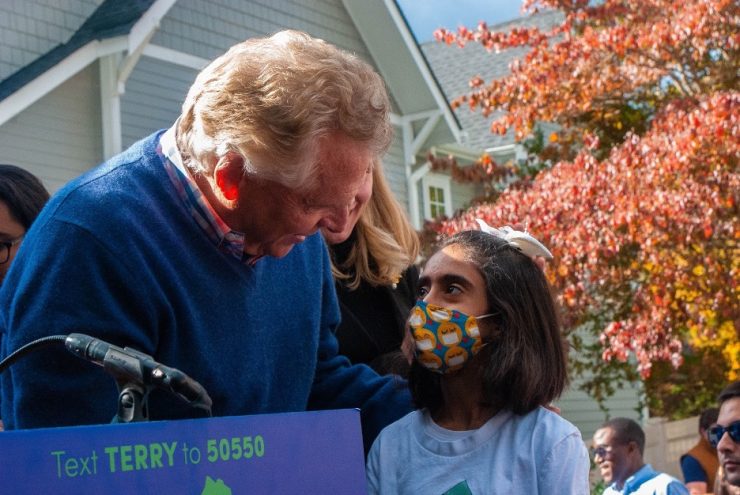 In the home stretch of a highly contested and nationalized race, Democrat Terry McAuliffe and Republican Glenn Youngkin are seeking to rally voters in Richmond around one re-emerging issue: education.

RICHMOND, Va. —- Surgical technician Cassandra Taylor works Monday through Thursday and will not be able to vote on election day, so she made sure to vote early on Saturday. For Taylor, who has three grandchildren and one on the way, the big-ticket item is education.

“I would like for my grandchildren to know that their dreams matter, and their life matters, and hopefully if we get the right candidates in there as we move forward, those things will be impacted in their lives,” Taylor said.

In the home stretch of a highly contested and nationalized race, Democrat Terry McAuliffe and Republican Glenn Youngkin are seeking to rally voters in Richmond around the same issue that has galvanized Taylor: education.

In a state ranked fourth in the country for public schools nationwide, education has somehow become criticized and central to the campaign.

For recent weeks leading up to the election, Youngkin’s campaign has laid a strong emphasis on education, specifically on the teaching of critical race theory in Loudoun County. Another such ad features a parent who fought to have Pulitzer Prize-winning author Toni Morrison’s “Beloved” banned from her school district’s curriculum.

In response, McAuliffe has shifted his messaging away from an anti-Trump narrative to remind voters of his experience in the Commonwealth.

“I’m leaning in on education because, folks, we have a great education system, but there’s things we have to fix,” McAuliffe said at a rally on Sunday in the Richmond suburb of Henrico two days before the election.

The former governor told an energetic crowd of supporters, “We have to diversify our teacher-base here in Virginia. We all know what we have to do in a school to make everybody feel comfortable. Let’s diversify.”

There have also been actions taken by local school boards, including the now-withdrawn book ban by Central York School District in York, Pennsylvania, which sought to ban largely Black and queer resources from library shelves.

This newfound national emphasis on education in schools is ever-present in Virginia. One school board chairman in Chesterfield County, Virginia, said that, “critical race theory is not supported by members of the board. In Chesterfield, our goal is unity, not division.”

The efforts of both gubernatorial campaigns to spur conversation around education are not lost on Virginia voters.

With her children by her side, Chesterfield County resident Heather Mitchell became emotional when speaking about education. Mitchell, who has recently pulled her children from public schools, said, “I want to make sure that public schools are educating our kids, not indoctrinating them.”

She was at a Youngkin rally one day before the election, and heard Youngkin echo her sentiments on education, telling an enthusiastic crowd,  “To teach our children to divide everyone through a lens of race and make one group oppressors, and another group victims and pit them against one another. It’s not right,” he said, “On day one, I will ban critical race theory.”

The contention surrounding the issue of education also highlights a racial divide among voters.

While acknowledging that there are many parents who support Youngkin, Richmond Mayor Levar Stoney said, “When I hear folks want to sanitize, or erase Black history, remove books like “Beloved” by Toni Morrison, I ask, ‘Is this the man for our parents as well?’”

Stoney further emphasized the need to look at school boards in a democratic way, “So it doesn’t exclude parents who look like me.”

For Henrico County Board of Supervisors member Frank J. Thornton, as a former educator and as a Black man, critical race theory is an extremely important issue in this election. Thornton called the banning of books “disingenuous,” and said that banning literature is “not how democracy works.”

For many parents, however, there are other issues related to education.

“Parents are just frustrated,” said former GOP strategist Tucker Martin. He said many parents are more concerned about the day-to-day care of their children, having been both caretakers and teachers during the pandemic.

Martin said Youngkin “tapped into a lot of parents who have been really holding their houses together with duct tape for 18 months.”

For Tyvon Bates, Virginia state political director for the American Federation of Teachers, education is this election’s most important issue, but it has nothing to do with critical race theory.

The bigger issue is opening schools safely — and making sure they stay open.

“We’re talking about real meat-and-potato issues,” he said. “We have made so much progress over the last three years so if the other side comes in, I see these gains being erased overnight.”