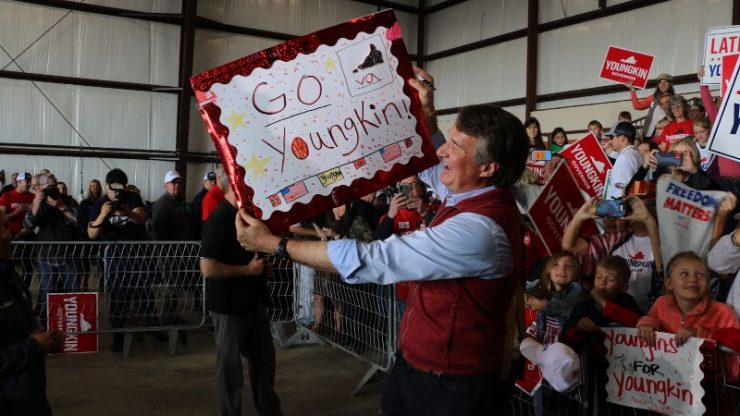 RICHMOND, Va. — The election between Terry McAuliffe, a former governor and veteran Democratic fundraiser, and Glenn Youngkin, a Republican businessman and political newcomer, will serve as a significant bellwether for future elections, as well as the most competitive race since Trump begrudgingly left the White House this past January.

McAuliffe’s message had been simple: A vote for Glenn Youngkin is a vote for Donald Trump.

However, Youngkin ran a campaign where he has walked a fine line between welcoming his endorsement multiple times and keeping him at an arms’ distance throughout the race. His rhetoric has strayed away from the bombastic, angry Trump loyalist, and instead, he has advertised himself as a suburban dad, often sporting his classic fleece quarter-zip sweater.

His win is now seen as a playbook for Republicans navigating elections in a post-Trump presidency, especially in this coming year’s midterm cycle. Republicans expect big gains in Congress, and many Republicans have been trying to navigate how best to do so in a post-Trump political climate. Youngkin’s win, called in the early-morning hours on Wednesday, is now sending concern throughout Democratic circles about whether they could be in trouble in the midterm elections in 2022.

Bill Bridenstine, a retired lawyer in Virginia, was one of the supporters of Youngkin at his rally on Monday before Tuesday’s election. He said he voted for  Trump in the presidential election but is happy with the way Youngkin distanced himself from the former president.

“He has good ideas and presents them in a forthright and intelligent manner, rather than just blurting things out like Donald Trump does,” Bridenstine said.

But Democrats are eager to keep Trump and his character on display and characterize his support as a negative issue. Big-name politicians, including former President Barack Obama and President Joe Biden have used this factor of tying Youngkin to Trump as a key component of their defensive strategy.

McAuliffe invoked terms such as “Trump wannabe” when referring to Youngkin, calling him a Trump extremist disguised as a moderate.

But those familiar with the race said that this strategy backfired. Tucker Martin, a Republican consultant in Virginia who worked as the director for communications under former Republican Gov. Bob McDonnell, told The Wash that McAuliffe’s campaign has begun to lose its credibility closer to election day.

“I think what has been tough for the McAuliffe side is that Glenn Youngkin does not come across as a Trump-like figure,” Martin said. “What your attack is, does have to have some semblance of reality to it.”

He explained that Youngkin is more similar to past Virginian gubernatorial candidates, such as McDonnell and 2017 Republican candidate Ed Gillespie, than he is to Trump.

Scott Hevener, a supporter of Youngkin who attended a Richmond rally sporting a MAGA hat on Monday, said that Trump is a non-factor.

“He hasn’t been running as a Trumpster necessarily; he took his endorsement, but I don’t think it has anything to do with Trump,” Heaver said. “Trump is not on the ballot here.” In the second gubernatorial debate this past September, as McAuliffe tried to link his opponent to Trump, Youngkin fired back, saying, “You’re running against me. It’s Terry McAuliffe against Glenn Youngkin.”