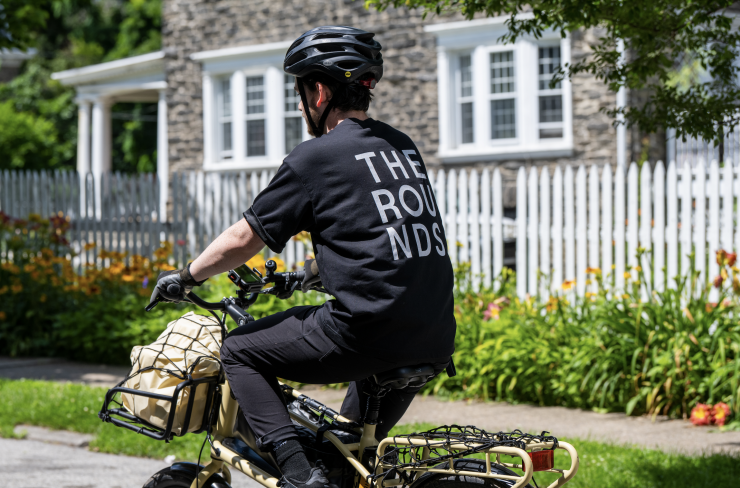 The Rounds, a D.C. based company that delivers reusable and refillable household products, recently launched in Petworth in an effort to decrease waste in the neighborhood.

Alex Torrey, founder and CEO, said he decided to start The Rounds because the process of getting essential household products such as shampoo, soap and kitchen necessities like olive oil was “completely broken.”

“Petworth, like other neighborhoods, has a big problem with waste,” Torrey said. As more people rely on e-commerce to get everyday products, especially during the pandemic, it’s creating a tremendous amount of waste, Torrey said. According to the EPA, packaging accounts for nearly 30% of municipal waste.

Alex Torrey, CEO and founder of The Rounds, talks about how E-commerce is not sustainable.

In order to combat this, The Rounds’ products come in refillable containers, eliminating packaging waste. Torrey said they’ve also created an algorithm that generates the most efficient delivery routes depending on which customers need what products that week.

Members who subscribe to The Rounds’ services can save up to an average of 50 pounds of trash from their homes every year, according to Petworth News.

Additionally, when waste is sent to landfills, it is often incinerated, producing harmful methane gases in the atmosphere and contributing to climate change, Catherine Plume, the chair of the Sierra Club D.C. chapter, said.

“We just didn’t move the needle very far in the first 10 years,” Plume said. “So, with that track record, I just say the progress that we’ve made is very minimal.”

Plume said the city needs to do more in order to meet this diversion goal. She said the District’s Office of Waste Diversion has no plans to implement any aspect of the Zero Waste Omnibus Amendment Act which requires funding in order to increase the city’s waste diversion rate.

She said she’d like to see the Benning Road power plant reconstructed to allow for a composting facility — an improvement not currently included in the Department of Public Works’ plan.

“Composting just really reduces a lot of unnecessary waste from waste streams and can help regenerate soils and do all sorts of good stuff,” Plume said.

She said the city should implement free composting services because it will motivate more people to compost, which is one of the best ways to raise waste diversion.

Though Plume said the problem of excess waste is not an issue unique to one ward, Kéthia Clairvoy, a Petworth resident, said since the beginning of the COVID-19 pandemic she’s seen more trash on the streets of Ward 4 than before. Clairvoyant said this is due to people being stuck at home and producing more trash, hence putting waste management services behind.

“The biggest culprits, most people can ascertain is, from the lack of waste management,” Clairvoyant said. “Each month of the pandemic there are fewer services.”

Clairvoyant said the overflowing trash on her street has caused issues such as rodent infestations. She said she’s been trying to produce less waste because she’s scared of rodents and had a few run-ins with mice while taking her trash out in the past few months.

For Torrey, experiences like these point to the need for The Rounds, which was so popular at launch people had to join a wait list in Petworth.

“Petworth is definitely one of those places where people are busy and are looking for convenient ways to get their essentials and because they’re producing and creating a lot of additional waste,” Torrey said.

“People are very open to a more sustainable alternative.”