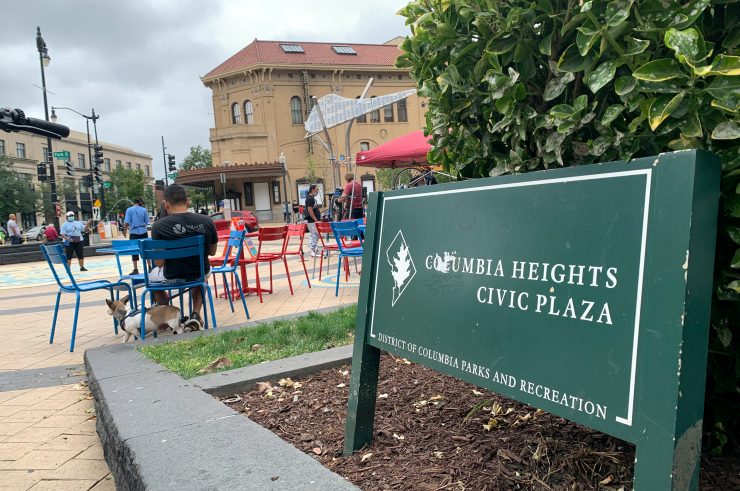 The “Civic Plaza For All” initiative was meant to bring activities to Columbia Heights, but is now being redesigned after organizers voiced safety concerns and a lack of communication among government agencies.

The “Civic Plaza For All” initiative began in June but was paused from Aug. 22 to Oct. 3 because of safety concerns in the plaza. Buitrago said the plan was to host various events in the plaza five days a week, but now she and her team are working to just maintain one.

“I don’t think my project failed,” Buitrago said. “I feel like the agencies that were supposed to give us their support are the ones that failed.”

Buitrago said she paused the project after several negative incidents involving groups of men who regularly spend time at the plaza. The problem was not their presence, as the plaza is a public space, but that some of the men would occasionally get into fights, pass out from intoxication or sexually harass Buitrago and the women participating in the yoga classes, she said.

“Nobody wanted to be in downward dog when you have a group of drunk men just staring at you,” Buitrago said.

Community groups told The Wash that some of the men were Columbia Heights residents and others were experiencing housing insecurity. A majority, including the people Buitrago interacted with, needed more access to governmental and social services.

After a few weeks of events and working through the problems, Buitrago said she ultimately had to pause events after her colleague, Nayely Reyes, called her from an event, “freaked out.”

Reyes said a man who appeared inebriated at one of the District Bridges tables made multiple “sexual gestures” toward her and responded aggressively by yelling and cursing at her when asked to leave.

“You should never feel like you’re risking your life or you’re going to get sexually molested at any type of job when you’re just here to bring fun stuff to the community,” Buitrago said she told Reyes.

The next day, Buitrago said she emailed her manager to postpone the program.

Originally, Buitrago said she asked DCMPD for a stationed officer to be present during events, but the police department told her they did not have sufficient staff to do so. She then looked into hiring off-duty police officers as security, but department rules prohibit off-duty officers from working in a public space. She said she then looked into hiring private security but was told they were not permitted to work in a public space either.

Captain Francis Jenkins of DCMPD’s Third District oversees officers in the Civic Plaza area and told The Wash officers have been patrolling the area more consistently both on foot and by vehicle since the Oct. 1 start of the 2021 Fall Crime Prevention Initiative.

Crime tends to increase at night in the area, Jenkins said, and he understood why people might feel concerned for their safety while in the plaza. A set group of Columbia Heights officers are set to patrol the Civic Plaza and shopping district areas on foot, with the hope they will eventually get to know the residents spending time in the plaza and better de-escalate conflicts.

“As far as the harassment, that’s where we come into play,” Jenkins said. “We know we can’t have any harassment, any assaults. That’s all police matters, so that when we try to give as much presence and visibility as possible to deter issues like those.”

Three weeks after restarting the pilot program, there have been no major security problems, Reyes said. Zumba is in the morning — yoga was canceled after the repeated catcalling incidents — double dutch and outdoor dining is in the afternoons. Las Noches Culturales started for the first time on Oct. 17 with a live Cuban band and free food.

For some event attendees, such as Joe Nunes, unarmed groups like the DC Peace Team were preferable to the police or private security.

Nunes, a Shaw resident, noticed the plaza event while out with his 8-year-old son. They stopped, learned how to double dutch and sat to eat pizza from a local vendor. An armed presence, Nunes said, would have taken away from the community feeling of the space.

Nunes said as long as everyone remained peaceful, he thought it was important for his son to see people in the plaza, instead of pretending the people or their problems did not exist.

“These are people too,” Nunes said. “They may be different than you, yes, but [armed guards] don’t help the situation. There’s a balance.”

Eli McCarthy, co-founder of the DC Peace Team, said the team comes and “hears the stories” of the groups in the plaza to find out why they are there. He said the team normally discovers the residents have unprocessed trauma and are without the sobriety or mental health resources they need.

“They’re looking for people to hang out with or that can be friends,” McCarthy said of men in the plaza. “They want to be included, so I think part of the opportunity for us, more broadly is to think of events and ways to include as many people as possible”

The DC Peace Team, have volunteered through the ANC1a Public Safety Committee to be in the plaza on weekends — independent of District Bridges scheduled events — to help de-escalate conflicts like Buitrago experienced.

Buitrago said she appreciated the DC Peace Team’s presence, but she did not know the extent of their training or what they could do to help the situation.

The men need more resources, McCarthy and Buitrago agreed. A multitude of agencies, including DCMPD, ANC committees, DDOT and the Department of Behavioral Health, have jurisdiction over the plaza. Buitrago said she believes roles are not clearly defined between all involved organizations, leading to problems not being fully addressed.

When the men receive help through a sobering center or emergency services, Buitrago said they do not know what to do next.

“So they just go back to the plaza and keep drinking,” Buitrago said. “There seems to be a lot of hand-holding missing.”

Buitrago went to Ward 1 Councilmember Brianne Nadeau with her concerns. Nadeau helped award District Bridges an additional $175,000 to keep the Civic Plaza project going beyond the pilot and find a way to connect the groups Buitrago talked about with existing groups to help keep them sober.

The money will go toward two new positions with District Bridges: one full-time staff member to maintain future plaza events and another to work with the available resources to find the men the help they need, Buitrago said.

“It’s not the fact that the men are here,” Buitrago said. “It’s the fact that we as a community have just completely normalized this, where we walk through the plaza and there’s 10 bodies laid out, completely passed out.”

Buitrago will not be continuing with the project herself after the pilot ends in November. She said the project is not near what she originally proposed last year when she applied for the grant, but she is putting everything in place for whoever takes over the full-time position to succeed.

The revitalization project will ultimately fail, however, unless more people engage with the plaza, she said.

“If people don’t show up, it kind of defeats the purpose of us trying to do this for the community because we need the community to participate as well,” Buitrago said. “So it’s very difficult for people to expect us to just fix a problem when they don’t want to be part of the solution.”