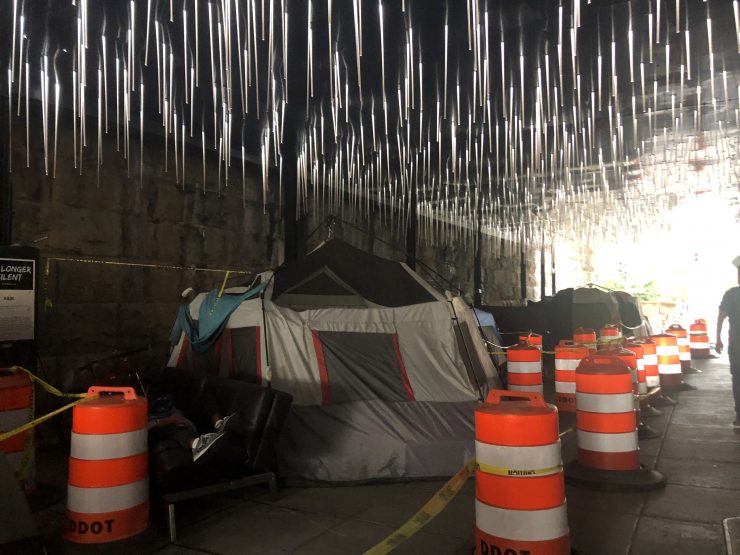 Activists say the brutal clearing is symptomatic of business and government’s failure to directly engage with unhoused people.

An unhoused resident of the L Street NE encampment in NoMa was struck by a Bobcat front-end loader on Monday during a planned encampment clearing. The Office of the Deputy Mayor for Health and Human Services said in a statement that the man was unharmed but received additional medical attention as a precaution after the accident.

“We have the funds set aside to end homelessness for many, many people. Our unhoused neighbors deserved better than what happened today,” said Councilmember Charles Allen (D-Ward 6) via his communications director in an email.

Things escalate as someone was accidentally bulldozed while still in their tent pic.twitter.com/S56tdMwt71

The clearings were part of a plan to close four encampments through the city. An Encampment Pilot Information Sheet, put out by DMHHS, said the aim is to decrease “health and safety risks” and increase “meaningful service connections and stable housing.” But activists said closing the encampments will leave unhoused people without a safe place to stay and will make offering services more difficult as the communities they serve will be dispersed.

“Our petitions got a lot of signatures, and that gave pressure on the city government to delay it,” said Jeffrey Tsoi, an activist and Georgetown University law student who focuses on housing justice issues.

The Encampment Pilot Information Sheet and Deputy Mayor for Health and Human Services Wayne Turnage both said the city is working with encampment residents to help them find more permanent housing, but residents described the communication as poor.

“Supposedly they have somewhere for me to live, but I’m just waiting to try to get placed somewhere,” said Andre Juste, who has lived at the L Street underpass for three years.

Encampment closures across the city, like Franklin Park’s establishment of a no-tent zone upon the park’s reopening, leave limited options for unhoused people.

Tsoi and other advocates worry about what the closures mean for unhoused people who refuse to accept the city’s housing vouchers.

“The activists helped people move here when other places were cleared out,” Tsoi said of the M and L Street encampments. Now, he is unsure where the residents will go.

DMHHS said it will “continue to engage with” those who refuse housing support and will “work to address any needs they have” in its Encampment Pilot Informational Sheet.

“If the world was just, we could trust in the city to do what it says it’s going to do. But it’s extremely difficult to trust a municipality that allows people to live on the street,” Executive Director of Ward 6 Mutual Aid Maurice Cook said.

DMHHS officials and Metropolitan Police were present at both encampment clearings. Multiple representatives from each declined to comment.

Cook was skeptical of DMHHS’s motives for permanently clearing the encampments.

“The only reason that this is happening is that they have this new constituency that doesn’t wanna see tents by their new luxury housing. I believe that this is more about the aesthetics,” Cook said.

NoMa was among D.C.’s most rapidly gentrifying neighborhoods, the National Community Reinvestment Coalition found in 2018. NCRC is an organization that works to end housing and loan discrimination.

In August 2019, the president of the NoMa Business Improvement District published an open letter complaining about the encampments. The letter read in part, “it is essential that something be done to recognize and protect the right of D.C. residents, workers, and visitors to safely use and pass through public space in NoMa.”

Other advocates expressed concern about the likelihood that former encampment residents would be pushed into shelters as the pandemic wears on. DMHHS has cited public health concerns as a reason for clearing the encampment.

Ultimately, Black said, the clearings are symptomatic of business and government’s failure to respond to unhoused people when making decisions about their lives.

“You can hear the violence in that.” 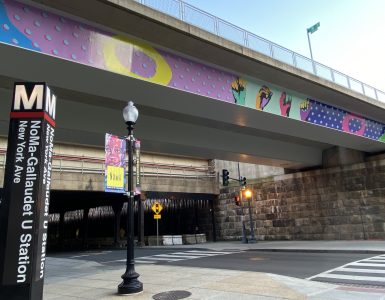 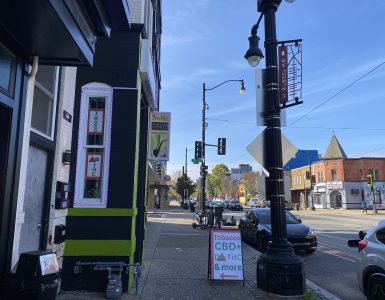 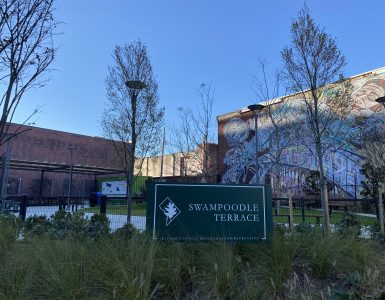