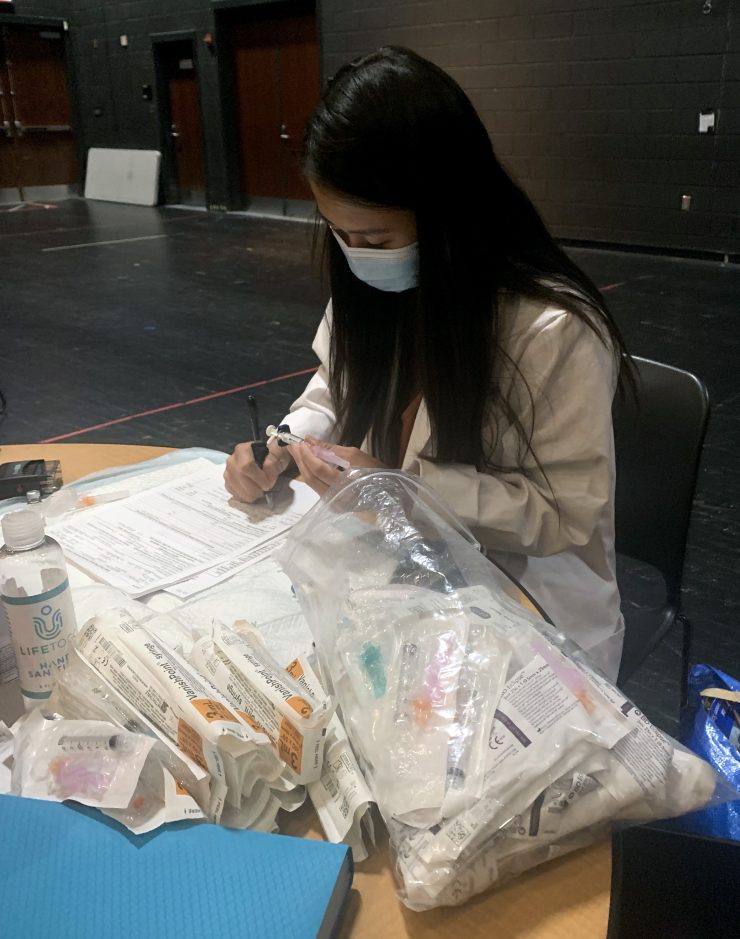 The city will continue hosting free vaccination clinics and encourage students to get the shot in time to comply with the new mandate.

Louise O’Connell received her first COVID-19 vaccine three days after she turned 12 — just in time for her school’s cross country season. Her father, Jonathan, did not know she would end up needing it to participate.

“I’ll admit I was not even aware [of the mandate],” Jonathan O’Connell said. “I just knew that as soon as she turned 12, we would get it for her.”

The mandate applies to athletes in all D.C. schools, including public, charter, parochial and private schools. Bowser announced the same day that all teachers, faculty and staff in those schools also have to be vaccinated.

Students and staff affected by the mandate have until Nov. 1 to comply. The students who turn 12 between Sept. 16 and Nov. 1 must be fully vaccinated before Dec. 13. The mandate does allow medical and religious exemptions.

This is currently the only enacted student vaccination mandate, but several city council members announced Monday a proposal to make COVID-19 vaccinations mandatory for all students. If passed, it would only be the third full mandate for students anywhere in the nation. The Los Angeles school district passed a similar mandate last month, followed by an order for the full state from the California governor.

Louise O’Connell, now one of the 42% of vaccinated D.C. residents between the ages of 12 and 15, received her shots at the Columbia Heights Educational Campus (CHEC) in Ward 1. The city ran vaccination events at the school through August and September and will resume Oct. 12 with more weekly appointment options.

The school offered the Pfizer shot — the only available COVID-19 vaccine approved by the FDA for children ages 12-15. The city is trying to encourage eligible children to get the vaccine by offering incentives at such events, including gift cards and Apple Airpods to students receiving their first shot.

Dr. Lewis Ferebee, the chancellor of DC Public Schools, spoke about such incentive events during the Sept. 21 Committee of the Whole virtual meeting on returning to in-person classes. DC Health and DC Public Schools collaborated to host such events in order to help families feel safe and excited about returning to school, Ferebee said during the meeting.

“Our goal is to make sure our students are physically and physiologically safe and can fully participate in academic learning,” Ferebee said.

As for students looking to participate in sports, how the mandate will affect team enrollment is still unclear.

A spokesperson for the District of Columbia State Athletic Association told The Wash the effects of COVID-19 on athletic enrollment is not currently available, especially because the mandate will not be the only influential factor. The spokesperson said a decrease in participation was possible but not the goal.

Currently, Ward 1 has the fourth highest percentage of children vaccinated between 12 and 17. As of Sept. 27, 51% of that age group were vaccinated. In comparison, only 18% of the same age group are vaccinated in Ward 8.

Louise O’Connell said she felt “safer” knowing all her cross country teammates would be vaccinated. For her, being vaccinated meant less of a chance she would have to return to online schooling — something she considered, “boring” and “not very engaging.”

“There are a lot of people at my school, and it just makes it generally safer for them and for me to keep going places and doing things,” Louise O’Connell said.

The idea of children as young as Louise O’Connell receiving the COVID-19 vaccine is still being debated among parents, though the CDC recommends it. Results from a Kaiser Family Foundation study released in August found that 20% of the parents involved in the study said their children would “definitely not” be getting the vaccine.

The Education and Youth Committee from ANC1A — which serves the CHEC area — met last week to discuss the community’s reopening goals for the new school year, and they did not mention any further vaccination mandates.

The committee’s new DC Public Schools community representative, Damián Popkin, attended the meeting and said the school district would be focusing on ensuring high school students filled all the credits they missed and developing the best pandemic safety regulations.

“A big part is just figuring out COVID protocols that work and figuring out that balance between making it work versus what is an acceptable level of risk in those spaces,” Popkin said at the meeting.

The committee did not discuss future vaccination mandates, and instead focused on how to decrease equity disparities and establish mental health resources in schools.

For local parents such as Jonathon O’Connell, who lives in nearby Petworth, children’s safety is the top priority. Jonathan O’Connell said he did not want any students to miss out on engagement opportunities this school year, but he supported efforts to get eligible people vaccinated. His other children, currently ages 9 and 4, would be getting the shot when they were able, he said.

“I can’t wait until they’re eligible because I want to get them vaccinated as soon as that’s allowed also,” Jonathan O’Connell said.