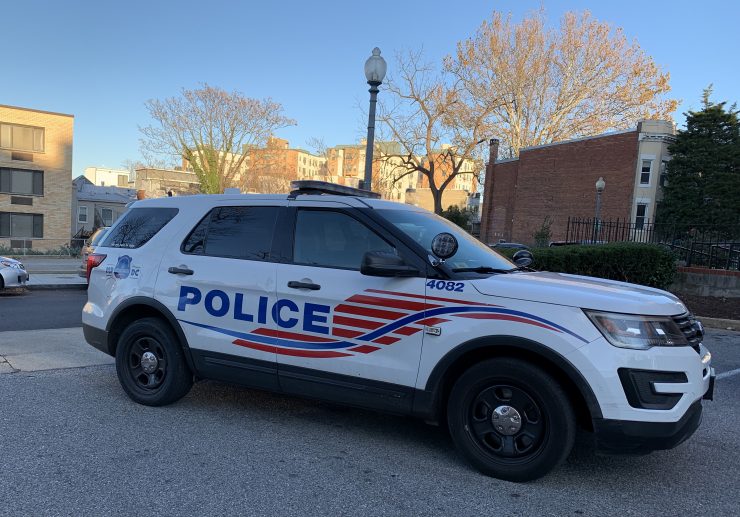 A robbery and a domestic assault occurred late Sunday afternoon on the same block in the Columbia Heights neighborhood.

The Wash got to the scene about a half-hour after the Metropolitan Police Department, or MPD, issued an alert via Twitter for a robbery investigation on the 1500 block of Meridian Place NW. By that time, another group of officers was entering Sunflower House Corporation, the apartment building located at 1440 Meridian Pl. NW.

ALERT: Robbery Investigation in the 1500 block of Meridian Pl NW. Lookout is for 3 Black Males, 1 armed with a rifle, and was last seen in a Gray Nissan

The MPD arrested Elie Moussa, 64, for allegedly throwing a glass vase at a woman in a domestic dispute, according to the public incident report provided by Kristen Metzger, deputy director of the MPD’s Office of Communications.

Moussa came out of the apartment building in handcuffs around 4:15 p.m., and the victim came out a few minutes later. She was wearing a sleeveless top and had gauze wrapped all the way up her left arm. Some blood was seeping through the bandage near her wrist.

The victim was taken to the hospital with non-life-threatening injuries, Metzger said.

A man carrying GrubHub-labeled insulated bags went in and out of the building when a few police officers first entered it around 4 p.m. He said he did not know what was happening and didn’t hear what the police officers were talking about. He said he was an Amazon deliveryman and wouldn’t give his name.

A man was robbed on the sidewalk across the street from the Sunflower House Corporation apartment building around 3 p.m., according to the incident report.

One of the alleged assailants had what the victim described as “a long black gun or a rifle” and held him against a fence with his right hand, keeping his left on the gun. He was robbed by two men, while a third stood lookout and a fourth drove the fleeing vehicle, according to the public narrative in the incident report.

The man declared over $1,400 of items and cash stolen, according to the report. The robbers stole a full wallet, an iPhone XR, AirPods and a Gucci belt.

Gerard Tyler, who has lived in the building for eight years and became board secretary during the pandemic, said police activity has diminished since MPD put up a camera that records the area from inside a secure, parked trailer.

“I came outside to walk my dog when I saw all the police officers,” Tyler said. “I tried to call the director of the building and share some information, but [the officers] won’t tell me anything. They just said there’s nothing to worry about.”

The parking lot across the street from the apartment building used to overflow with people who didn’t live on the block, Tyler said. He suspected many were drinking and using drugs.

“But it’s been pretty quiet since they put the drone up,” she said. “The building itself is really quiet. Just the parking lot was the issue.”

That “drone” is a closed-circuit television trailer, Metzger said. They are stationed around the District in hopes of combatting neighborhood crime.

Metzger was unable to confirm when the trailer was installed in the Meridian Place neighborhood by press time. MPD’s website does not have the 1400 block of Meridian Place NW on its list of areas with closed-circuit television trailers.

A few other passersby, who only provided their first names, also said the block has been quiet since the MPD added the camera. Many praised the MPD for responding to incidents and maintaining order within the neighborhood.

ANC 1A, which includes 1440 Meridian Pl. NW, sees theft as its most frequently occurring crime.