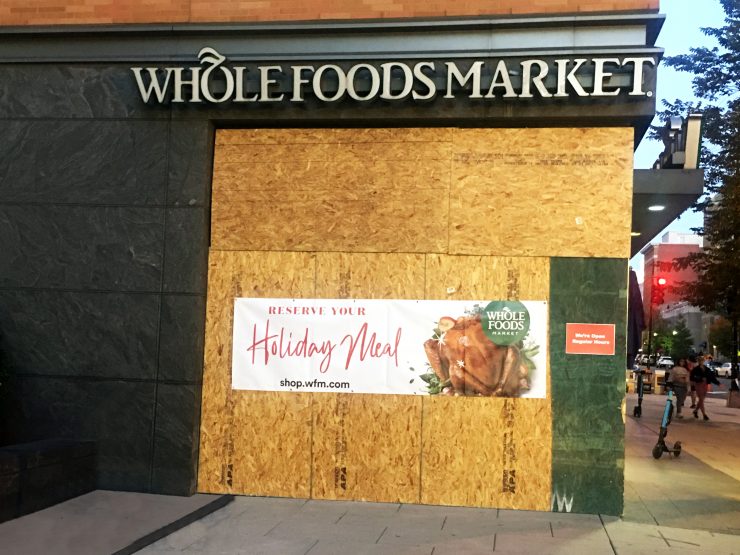 GW students and nearby businesses prepare for potential election unrest

Last week, the university advised students to prepare for “election related disruptions” ahead of the presidential election, some listened.

Less than a mile from the White House, some businesses on the George Washington University campus have boarded up windows in case of unrest after election results are reported. In an email last week, students were advised to purchase groceries and medicine, in anticipation of the election results.

Businesses on I Street, across the street from university dorms, have boarded their windows to avoid any property damage over the week. Monét Whitaker, manager of Sweetgreen, said they boarded their windows in case of riots and plan to leave them until the end of the week. Whole Foods and the Residences on the Avenue are other businesses that have taken the same precaution.

Huge concern: This email I just got from GWU advising students prep 1 week of supplies in case of a post-election DC lockdown. 😰😰😰 pic.twitter.com/B6OXOdKYLm

‘A mix of worry and fear’

When Sochibeze Akaneme read the email Sunday night, he decided the smartest thing to do was follow GWU’s advice and stalk up on food and other necessities. The next day, he spent over an hour commuting from his Foggy Bottom apartment to the Costco in Alexandria, Virginia.

Akaneme said he’s used to university alerts about potential political activity that could disrupt student life, but he took these warnings more seriously because the pandemic means less support from GWU.

“It’s scary to think of unrest happening around you,” he said.

He also said it was a sad reminder to him of how divided the country is that violence is a real possibility no matter which candidate wins. But, he’s determined to be calm on election day.

“I’ve been stressed and worried about Election Day for the past few months so my goal for today is to focus on destressing,” Akaneme said. “I’ve disconnected from social media and the bubble of the election.”

He said he will not worry about the things outside of his control until there is something to worry about. With enough food to last two weeks, he said he is taking advantage of the school holiday to catch up on homework and stay safe at home.

‘Not surprised, but a little scared’

The email was a deciding factor in Enku Negussie’s decision to leave campus and spend the week in Maryland with her aunt’s family.

Negussie, who’s parents live in Ethiopia, was one of about 400 students granted university housing during the remote semester. She said she had already planned to spend Election Day itself with her relatives, but the email prompted her to leave sooner.

“My aunt came to pick me up on Saturday,” she said. “I packed a week’s supply of clothes and my books and left immediately.”

Negussie said reading the email left her “not surprised but a little scared and concerned.” She said she understands that the university has to “overprepare” its students, but the email was unnecessarily “dramatic” and offered no actual resources or aid.

“They told us to prepare as if it’s a blizzard, but didn’t really offer any help,” Negussie said. “They said ‘buy groceries,’ but what about the students who can’t afford to stock up?”

Election Day has not disrupted routine for all students. For Diing Manyang, it’s “business as usual.” The junior said she has made no special adjustments for the day and will be in her dorm working on schoolwork.

One thing all interviewees had in common: they said this election is not one they’re likely to forget.