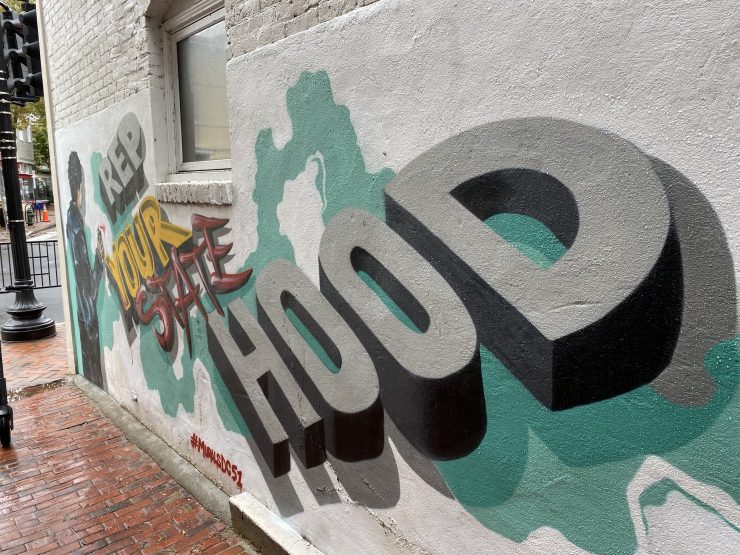 As millions of Americans head to the polls today or have already cast their ballots, their choice of U.S. senator might have an effect on a renewed local movement: D.C. statehood.

Washington, D.C. is the nation’s capital, but its residents have lacked representation in the U.S. Congress for more than 200 years. On June 26, the U.S. House of Representatives passed H.R.51, a historic bill granting statehood to Washington, D.C., under the new name “State of Washington, Douglass Commonwealth,” in a tribute to abolitionist and statesman Frederick Douglass, who lived in the District.

The legislation, which had a record 227 co-sponsors, carves a new federal district out of a small section of what is now Washington, with the rest of the District becoming a state. The vote on the bill was divided along partisan lines, with only one Democrat opposing it and no Republicans supporting it.

This year, the movement to turn D.C. into the 51st state has become viable for the first time in decades. The last time a statehood proposal reached a House vote, in 1993, it failed 277-153, with most Republicans and many Democrats opposing it.

Since September, Republicans in the House of Representatives have proposed alternative bills that would “retrocede” the District into neighboring Maryland, or limit the representation a new state would have in the U.S. Senate. The Constitution gives Congress the authority to create new states, although the president must approve of legislation creating a new state or states.

Statehood has popular support among D.C. residents and prominent Democratic politicians including Speaker of the House Nancy Pelosi and former Vice President Joe Biden. In the 2016 election, 79% of Washingtonians voted for a ballot initiative to petition Congress to pass an act creating the “State of New Columbia.” Nationwide, a September 2020 poll by progressive groups Data for Progress and YouGov Blue found that 43% of Americans support statehood, while 34% are opposed.

Opposition to D.C. statehood is particularly strong among Republican lawmakers. On the floor of the Senate the day before the House vote, Senator Tom Cotton (R-Ark) described the prospect of D.C. statehood as “insane” and compared the Black Lives Matter movement to the violent unrest of the French Revolution.

“The Democrats are committing an act of historical vandalism as grotesque as those committed by Jacobin mobs roaming our streets,” Cotton said.

Senator Lindsey Graham (R-SC) called the statehood bill “a continuation of the efforts by the Democrats to alter the way America operates,” and Senate Majority Leader Mitch McConnell (R-KY) has vowed to block debate on the issue in the Senate.

Two of the three proposed Republican bills support retrocession to neighboring state Maryland, which, along with Virginia, donated land to be used for the federal district established by Congress in 1790. The Virginian portions were retroceded in 1846. A 2019 poll showed that 36% of Maryland residents supported retrocession, while 57% opposed it.

Eleanor Holmes Norton (D-DC) introduced H.R.51 in January of 2019.  Norton, who has served as a non voting delegate to the House since 1991, said in a statement that Republicans’ efforts to retrocede the District demonstrate their “fear of the momentum our D.C. statehood bill is rapidly achieving.”

One of the most outspoken advocates for D.C. statehood is Mayor Muriel Bowser, who has clashed with President Donald Trump in recent months. Amid the protests for social justice over the summer, Bowser invoked the statehood issue in her rebukes to Trump’s deployment of federal law enforcement and the military against protesters in the District. The mayor echoed the language of the civil rights movement in her support for the cause, telling MSNBC’s Andrea Mitchell, “We’re in a historic march for statehood.”

“We know that the District becoming the 51st state is the only way that 700,000 taxpaying Americans are fully represented and become full Americans,” Bowser said.

Trump has waffled on the D.C. statehood issue. As a presidential candidate in 2015, Trump said he would consider statehood and promised that “something would be done that would make everybody happy.” During the 2016 Republican primary, he said he had no position on the issue and would form one later. Earlier this year, President Trump said that “D.C. will never be a state” because Republicans would not allow it.

Pro-statehood organizations like 51 for 51 have framed the issue in terms of racial equality, partnering with social justice groups such as Color of Change. The organization is trying to change the rules of the Senate so that a simple majority of 51 votes would suffice to pass a statehood bill. (The Senate’s cloture rule requires 60 members to end debate on most measures and move to a vote.)

“Across the country, people are recognizing that 700,000 mostly Black and Brown people living in the nation’s capital without a vote in Congress is pure injustice,” said Stasha Rhodes, campaign director of 51 for 51.

“We’re hopeful that now is the time that our goal to build a stronger, more equitable democracy will finally be accomplished,” Rhodes said.

Tom Sherwood, a veteran local journalist and political analyst for the WAMU Politics Hour, observed that prior to the House vote in June, the Democratic Party never seriously advocated for statehood, even when it had the power to pass it. But he said the current political climate could motivate Democrats to implement change if they gain control of the White House and the Senate.

“Given the Trump era rollback of environmental, housing, social service and other federal programs supported by Democrats, and given Trump’s Supreme Court picks and other issues, the Democrats—if in charge—have more incentive than ever to push along statehood to gain two more votes in the Senate,” Sherwood said.