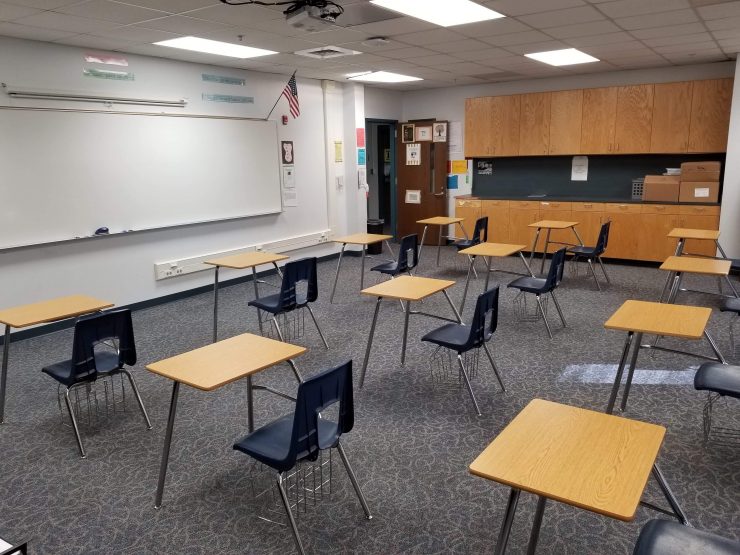 Teaching history through the fog of pandemic and politics

The Wash spoke to history teachers about connecting with students during a polarizing presidential election and while online. “My job as a teacher is not to make liberals. It’s not to make conservatives. It’s to make citizens,” one said.

History teachers across the country have been exploring new ways to reach students — virtually —  about the unprecedented presidential election.

Fatigue from teaching in front of the computer all day isn’t helping much, either.

They know this election isn’t a normal one. They are hanging in nevertheless – hoping to inform their students about how the democratic process works, what systems are in place to protect it and what rumors and propaganda might get in the way.

After President Trump tweeted in early October that he had COVID-19, Turner decided to turn the breaking news into a history lesson. “What is a line of succession? What does the constitution say about it?” he asked his students.

Like others, he finds himself walking a fine line when moderating class discussions about hot-button topics. Neutrality can sometimes conflict with personal political beliefs.

Turner said he lives in a conservative community but teaches in a liberal one.

“As a teacher, I find that our students only take one side without looking at the whole and while I might lean liberal, I find that there is an ethics problem there,” he said.

The fatal shooting of a young Black 18-year-old Marcellis Stinnette by a police officer in Waukegan last week caused a stir in Turner’s community. Turner says he doesn’t like to shy away from discussing issues like race especially when many of his students are minorities.

Race in America was one of the key highlights of the second presidential debate between President Trump and former Vice President Joe Biden. The candidates were asked to speak directly to Black families who fear for their children’s safety.

If police brutality and racism are happening in the Waukegan community, Turner likes to address issues head-on. Turner likes to use TEDx Talks as one of his main teaching tools.

Not all conversations come easily.

Asia Bingaman, 22, a first-year teacher, is finding it harder to get her students to participate in classroom discussions due to the virtual learning environment.

Her students aren’t required to turn on their computer cameras when they are learning from home. Because everyone’s home life is different, the use of cameras is an option. Most of the time, Bingaman says, she is teaching to small black squares on her computer screen.

On Oct. 31, a crowd of around 200 people who were peacefully marching to the polls in Graham, North Carolina, were pepper-sprayed by city police without warning. Police officers claimed the protesters didn’t have permits to close off the area, according to The News and Observer. This isn’t the only time Alamance County has had a run-in with voters.

The importance of voting comes up in class.

“We do talk about how important it is to vote and what voting meant from a time when you didn’t have any rights,” Bingaman said. Because Black history classes are inherently political, Bingaman said she is careful about the content. Sometimes her students challenge her about history.

“I’m like ‘there is nothing to disagree with. These are things that have happened. This is history. This is American history,”’ Bingaman added. “I welcome the debate to some degree because it teaches my students how to have these conversations in real life.”

Like Bingaman, James Christensen, 23, is also a new history teacher. He is teaching American history and government at Putnam County R-I Schools in Unionville, Missouri. Christensen is teaching most of his students in person, although some are logging in from home and watching him teach from inside the classroom.

“The biggest thing I want them to take away from my class is not that Mr. Christensen believes this way, but now you know how to develop your own thoughts on things and being an informed voter,” Christensen said.

Many of his students, Christensen says, believe that Trump is going to be reelected on Nov 3.

Christensen said he always tries to give neutral answers. He doesn’t want to persuade his students to have a certain viewpoint.  “It’s not my job to say ‘here’s my political belief and now it’s going to be yours.’”

Alexander Castro, a history teacher is in his second year at The Academy at Smith also located in Greensboro. He has struggled to get his students to engage in classroom discussions due to being online.

The Academy at Smith
Infogram

Castro said that if he was teaching inside an actual classroom, he thinks students would be more willing to participate. Now that his online classes are shortened by 30 minutes, Castro must be strategic about what to include or not. Castro said he has been involved in teacher workshops encouraging students to vote.

“I don’t lean towards any side, that’s what we’re taught to do. But I really stress the importance of voting,” Castro said.

Casto, 23, who is Latino, encourages all of his students, who come from diverse backgrounds, to vote when they come of age. Castro has 14, 15 and 16-year olds students in his classes. Sometimes they tell him that their votes won’t matter but Castro stresses that it does.