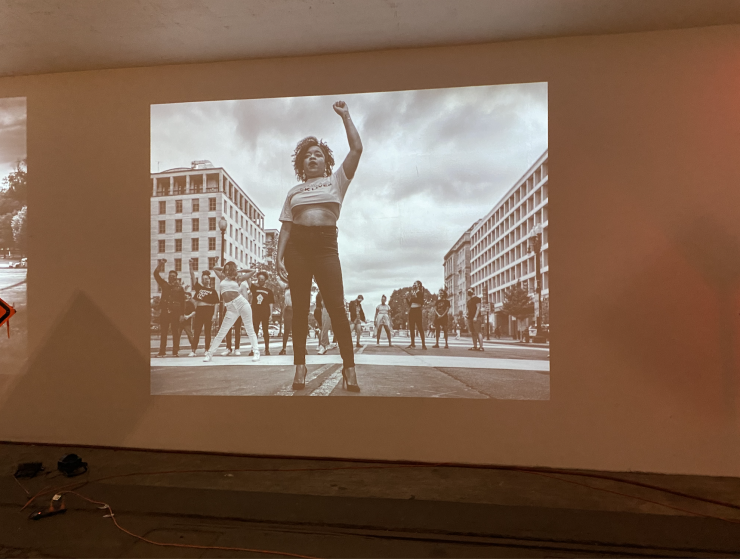 Dupont Underground is making a comeback after a period of instability due to the pandemic and an expired lease. The space launched a Black Lives Matter exhibit this month, the latest in a long history of innovative uses for the old streetcar tunnels.

Dupont Underground launched a photography exhibit in October highlighting recent Black Lives Matter protests in Washington, D.C., despite the economic hardship it has faced both before and during the coronavirus pandemic.

The exhibit is called “rise up.” and will run through Nov. 1. An online version of the exhibit will run until Jan. 12 of next year. The photographers showcasing their work include a junior in high school and a retired television executive.

“I wanted to highlight and support my colleagues that have been out there right alongside the protestors and activists and organizers, day in and day out,” said Shedrick Pelt, a Black photographer and Dupont Underground Ambassador.

In the last year, Dupont Underground has struggled to stay afloat financially, and the coronavirus pandemic only made the organization’s situation more dire.

The arts nonprofit, which is housed in a system of former streetcar tunnels underneath Dupont Circle, was on the verge of closing at the end of last year after a missed payment of $150,000. Then in March, the COVID-19 outbreak shut the space down for months. The lease expired in April and has not been renewed.

The Deputy Mayor’s Office for Planning and Economic Development said there are ongoing discussions with Dupont Underground to extend the lease.

“We remain committed to keeping this unique space activated as part of DC’s creative economy,” said Interim Director of Communication Kate Hartig in an email.

Amid the pandemic and the lack of a current lease, Pelt said that the mood at Dupont Underground has been “uncertain and a little anxious.”

“As a space, we want to be able to look towards the future,” Pelt said. “That question of the lease is really hindering our progress.”

Dupont Underground is the most recent reinvention of a subterranean space where streetcars operated from 1949 to 1962. Chief operating officer for Dupont Underground Nora van Trotsenburg said when she first visited the tunnels, it was reminiscent of urban art spaces in cities like Berlin and Amsterdam.

Over the course of half a century, government officials and developers have proposed wildly different uses for the space, including a shopping mall, a burial site and most recently, a nightclub.

Dupont Underground reopened during the coronavirus pandemic in September with an exhibit showcasing photographs by military veterans. During the pandemic, it has maintained a maximum capacity of 50 people and requires guests to wear masks and practice social distancing.

Pelt emphasized the significance of “rise up.” being in the nation’s capital, which has been a center of Black Lives Matter activism.

The “rise up.” photography exhibit runs at Dupont Underground through Nov. 1 and on www.dupontunderground.org until Jan. 12, 2021.

Click here to view a full-screen timeline of the history of Dupont Underground.