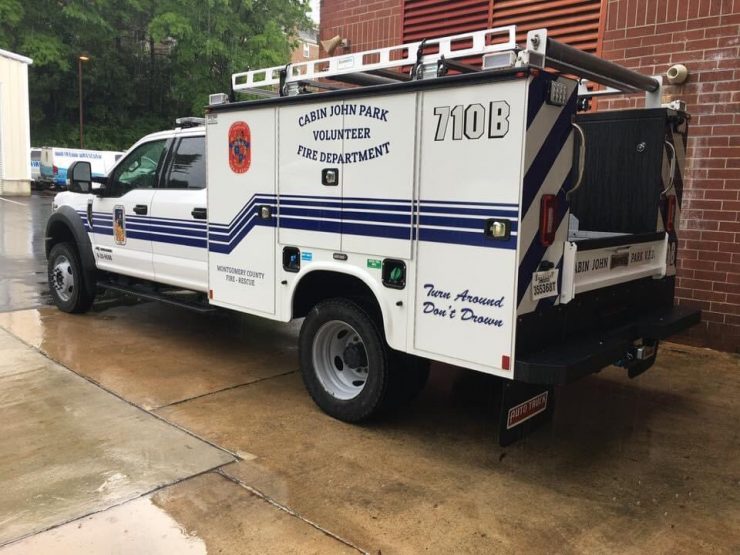 Every year southern Montgomery County and the Bethesda suburbs have flood warnings. Local EMS remind the community to “Turn around, don’t drown.”

Cabin John Fire and Rescue has an important message on all their water rescue vehicles. “Turn Around, Don’t Drown.”

Just a few blocks south of downtown Bethesda every year, after only a few inches of rain, flooding stops all traffic along some of the major roadways. River Road, Bradley Boulevard, and Little Falls Parkway are all blocked at least once a year by flooding. It’s a dangerous and consistent problem.

According to the National Weather Service, sections of Bethesda suburbs have had at least four flash flood warnings every year since 2008. Each one of those instances required water rescue crews from nearby fire stations.

For example, this past September 10, Montgomery County Fire and Rescue received numerous emergency calls related to the flooding. Spokesperson Pete Piringer said, “We handled about 150 calls for service, totally, in about three hours, from 12:45 to 3:45, and then about a couple dozen water rescues, bonafide water rescues, people stuck in high water.”

A number of those Bethesda area calls were supported by the Cabin John Fire and Rescue stations. That’s because the Cabin John is one of the few crews with boat equipment in Montgomery County.

“Swift water is a little unique,” said Harry Fones, a volunteer communications manager for Cabin John Fire and Rescue. “If we think there’s going to be an increased amount [of calls], we make sure we have enough coverage.”

While all the county’s stations are prepared for rescue operations, the situations that happen during flash floods are uniquely difficult. Swift-water rescue requires four to five years of training to certify for and extra equipment to ensure safety.

I cant say it enough!! TURN AROUND DON'T DROWN!!! This is Beach Dr. pic.twitter.com/T4gwf5bLEU

The Wash noticed there are no warning signs in the areas that frequently flood. That prompted a series of calls to each of the roadway owners near Little Falls Watershed  in hopes of learning about mitigation and safety plans for the area.

The appropriate sign is available. The U.S. Department of Transportation includes a yellow diamond with the words, “Road May Flood”, as a weather hazard sign for use on public roads. There’s also a high water gage sign that’s on the approved list.

Little Falls Parkway is owned by Montgomery County, but the entire roadway falls under the Montgomery County Parks division. Melissa Chotiner, the media relations manager, acknowledged that, “The park system is in a floodplain, so [flooding] is a consistent issue.” She did not reply to The Wash’s question if Montgomery County Parks had plans for flood warning signs but promised to get in touch with a division that is responsible for roadway signage.

River Road and Bradley Boulevard are maintained by the Maryland Department of Transportation. The Wash also contacted that agency and inquired if any plans were in place for flood mitigation or signage installation, but hasn’t received any response.

While this issue persists, community partners do encourage people to be vigilant when driving in the rain. Montgomery County Fire and Rescue, and the Department of Transportation, all reiterated that when it comes to driving in wet weather, there’s a significant danger anywhere flooding may occur.

Cabin John’s Harry Fones said when it rains, “We expect to run those calls,” but stressed the importance of being aware of your surroundings when you drive.

“We have the slogan on all our trucks ‘Turn around, don’t drown.’”